The Bottom of the Order: Pedro Guerrero 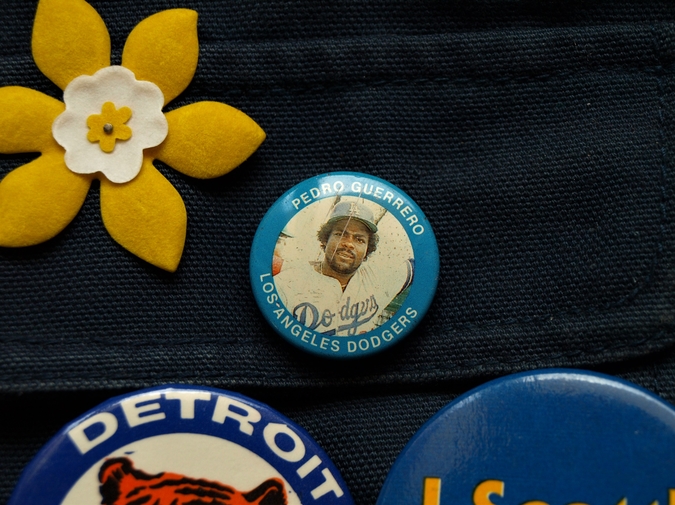 I think about Pedro Guerrero sometimes. More than is normal, or healthy, I'd guess. While doing some personal archaeology in a neglected drawer, I unearthed an old button bearing his smiling face on the front, and his 1984 batting average – .303 – on the reverse. It was produced in a series of similar buttons by the Fun Foods company, and I think I got it in a thrift store in Port Angeles, Washington, while waiting for a ferry in August of 2001, though I could be wrong about that. It might be that a friend gave it to me somewhere around that same time.

I know that I used to wear it on a corduroy coat that was a couple of sizes too big for me (also bought at a thrift store), thereby creating or reinforcing the impression that I was unfinished, or still had room to grow. This was a lot of years ago, though the above might still be true.

Baseball brainiac Bill James once called Guerrero “The best hitter God [had] made in a long time.” On NBC Game of the Week broadcasts, or while calling Dodger games for the SoCal radio market, Vin Scully would call him “Pete.”

More than most players, examining Guerrero's life feels like voyeurism, or like wandering hospital corridors with your head on a swivel. When he was good, he was, as James suggested, astonishingly good. He was big and strong, and had a quick right-handed bat, throwing the head violently through the zone. When he made contact sometimes it was like he was trying to knock a Soyuz-T out of orbit.

But his bad times were difficult to watch, and lacked the privacy that we'd all hope would greet our worst moments. This was a result, at least in part, of his place of employment, and his moment in history. He was plucked out of obscurity and poverty in San Pedro de Macoris, and dropped into the swirling and too-bright opulence of LA in the 1980s, where he and everyone around him were rewarded for excess and impulsivity. That same momentum carried him into the '90s, but as his celebrity and skillset faded, it translated poorly. He'd gone from sharing the MVP honors in the 1981 World Series and All-Star selections – feats his employers enjoyed enough to make him the highest-paid Dodger of all time – to vaulting a table to throw punches at Todd Worrell, taking the fall for fronting money to buy fifteen kilos of cocaine from an undercover agent in Miami and, possibly, doing drugs with O.J.'s girlfriend.

A part of me worries that the latter half of that list is what I was referencing by wearing that pin on my secondhand XL corduroy coat. In those days I traded in irony, the crueller the better. I was in my twenties and it was the twentieth century's last gasp, and that's what a lot of us did. We celebrated things that were plainly bad as supremely good. In that last pre-9/11 summer, when the world was just a bit more slapdash and improvised than it soon became, cynicism was a currency rare enough to be trading high. It was still – and I beg you to forgive me the use of this word – edgy.

When Guerrero went to trial for that drug deal, his lawyer argued that his client was intellectually incapable of recognizing the consequences of his actions. That it worked, and Guerrero walked free, does not rob the act of its cruelty, nor restore Guerrero's dignity in the face of the justice system's impersonal workings.

I'm trying to remember, or retroactively decipher, how I greeted that news. Did I find that funny? Was Pedro Guerrero a joke to me?

It's true that he always had trouble hiding his emotions. He threatened Nolan Ryan once, and the Express responded by putting one in Pedro's ear, cracking his batting helmet. But it's also true that Guerrero had a lot to be upset about; with all the promise he'd shown, he lost the equivalent of about five seasons to injury. That'd frustrate and disappoint most of us, and Pedro did not hide well his disappointment –  in himself, in the world. So it manifested in weight gain, poor effort, conspicuous consumption. He threw a bat at David Cone. He lashed out at umpires, reporters, teammates. He could be error-prone, and guilty of lapses. His hitting would fail at crucial moments, he would throw behind a runner. Inevitably, the fans would get on him, and the press would have questions. “Everybody hates the Dodgers,” he said.

And then, in 1988, just months before the Dodgers won their second World Series of the decade, Los Angeles traded Guerrero to the Cardinals. He responded, first, by suggesting that the Dodgers owed him more than the half share of the World Series bonus they sent him, and then by having a hell of a year in 1989, hitting .311, knocking in 117 runs, racking up 42 doubles, and landing in that summer's All-Star Game.

Streakiness is sometimes in the eye of the perceiver; for all his failings, Guerrero's lifetime average sits at an even .300.

Like a lot of us, I spent my twenties trying to distance myself from the child I'd only recently been. I recast the things which had once given me solace into juvenile distractions. And even those things I could not bear to abandon – baseball, mostly – I found new ways to accommodate. Instead of innocence and hope, I viewed them with cynicism and sarcasm.

I couldn't bear to face the game sincerely; I'd loved it too much, and so too much was bound up in it. About me, about how I'd presented myself to the world. To accept it nakedly would be to put myself out on display with no embellishment, no armor, and I was not prepared to do that. So I revelled in the mistakes of others and I spoke sarcastically of the thing I loved and I took a player like Guerrero as a symbol of absurdity and vice. So I wore that pin without ever pausing to consider the man's humanity.

Eventually that must have felt wrong to me. I don't know just when that happened. At some point I took the pin off and I buried it in a drawer, where it sat in darkness for a decade or more, until I dug it out just a few weeks ago. The corduroy coat is long gone.

By 1993, Pedro Guerrero's baseball peak was well and truly behind him. He could not secure a spot in the majors, nor even in the affiliated minors, so he signed with the Sioux Falls Canaries of the independent Northern League, and then Jalisco of the Mexican League. Far from the dazzle of Hollywood, he found himself in baseball's most distant provinces. He spun his wheels for a couple of years, unseen by most, before finally conceding the obvious and retiring in 1995.

He'd been a rare talent, but lost nearly a third of his career to injury, and the Dodgers held him back in the minors too long, because everywhere he might have played, whether in the outfield or the infield, was already occupied. All that is true. It's also true that Pedro Guerrero was drunk much of his time in the bigs. “I used to come to the park with a hangover every day,” he's said. And it's hard not to look at that, and at the impetuousness he sometimes displayed, and label the entirety of his career a missed opportunity.

One way or another, things changed. In retirement Guerrero dried out, found God, began mentoring children, and eventually achieved success as a manager in the Mexican Northern League.

In 2015, while back home in the Dominican Republic, he suffered a stroke, and then, in 2017, he had a second in New York, after which doctors declared him brain dead.

I've spent some time in a hospital recently, by my mother's bedside while she fought back from cancer surgery. This is the other reason I have been thinking of Pedro Guerrero lately. The wires and tubes, the hum of machines, the soft electronic tone denoting an abnormal reading, the unflappable ICU nurse at the ready, moving calmly in to comfort, to assess. In the low artificial light of 3:00 am, and the fog of my mother's narcotic confusion, with very little to do but hope, and doze, I thought back to another hospital, and to the time spent there between our twin boys' beds – acrylic boxes, really – when they – tiny, premature and precarious – fought their way through the first month of their lives. I thought of the strange way time moves in those places, waiting to hear from doctors, when boredom mingles with fear, and the worst thing any of us can think about is so proximate.

Guerrero's wife, Denise, who'd been with him since his early years in LA, held out hope. A further exam revealed that he was not, in fact, brain dead, but in a deep coma. Still, doctors were pessimistic, and recommended taking him off life support. Denise refused. Two days later he awoke, and shortly after that he walked out of the hospital.

When are we our real selves? Can changes made later in life reflect something about the people we've been all along, or at least suggest that we'd always been capable of being that newer version? And what accounts for that change? Do external factors knock us off some true center, or are they in fact always responsible for who we are?

And when things around us get sordid, and we can no longer locate the brake, and we find ourselves getting further and further away from the thing that makes us tick, what governs our response?

Can a photo reproduced on a button in 1984 depict two people at once?

Here's a thought experiment: write everything down – all the events of Guerrero's life, the accomplishments, the lows, the stories written, the words exchanged – on a set of cards, without his name on any of them. Lay them out on a tabletop in any order and look them over. Does your eye alight on the highs and then on the hard times, and do you then measure the gulf between them? Do you shake your head and say, “This person had everything.” Because if so, and if Pedro Guerrero could hear you, I'm willing to bet that he'd agree.