The Bottom of the Order: Every Fifth Day 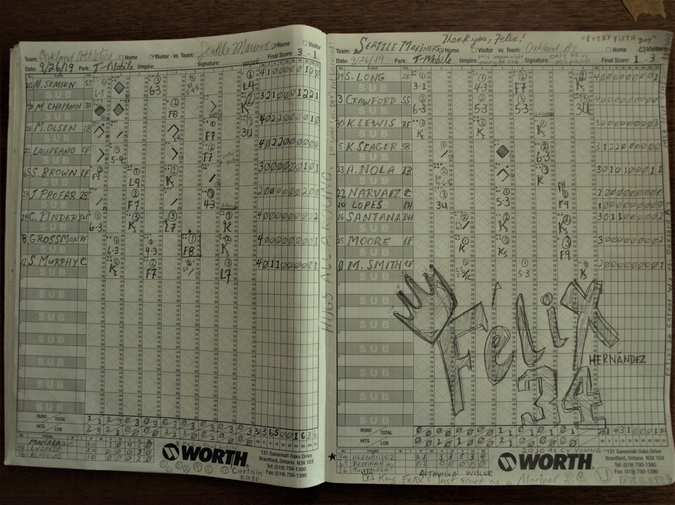 THE SEATTLE MARINERS' history is one long tale of woe studded with infrequently dazzling displays of capability, with all of it adding up to exactly zero championships. I say this as someone who has counted several Mariners as his favorite players. There's no logic to this, just as there's no relief from the routine cruelties of time and money. It just is.

There is no greater embodiment of all this than Felix Hernandez, who almost certainly just pitched his last game for the Mariners at the listless end of another lost season. Felix spent fifteen seasons in Seattle and never once made the playoffs. He was named the best pitcher in the American League while playing for the 2010 version of the team which lost 101 games, and finished 29 games behind the Rangers. Other than Ichiro, who that year collected 200 base hits for the tenth year in a row, Felix was the only bright spot. It was never quite that bad again, but neither was it much better.

But every fifth day, there was Felix. He was good for about thirty starts a year, logging in excess of 200 innings, and seldom fewer than 200 strikeouts. Those all qualify as elite numbers in a very competitive field. But that was Felix – reliably brilliant, tucked away in the PNW, doing the work, every fifth day, for most of fifteen years. Everybody knew he was up there, doing his thing, but nobody watched all that closely. For those fifteen years, the Mariners were seldom, if ever, the sort of team likely to be shown on a nationally televised game.

He remained reliably brilliant until about 2016, when the miles started to take their toll on the chassis. The engine remained – remains – good, but there are structural weaknesses now, the result of hard wear across the years, which will not be willed away. At the end of a contract, earning too much money, with a team again facing what's charitably termed a “rebuild,” there's no place for him. This is the harsh economy of both baseball and life, where loyalty and service are unequal to the unfeeling side of the ledger, and so change is deemed necessary, even if it isn't desired by anyone willing to say as much in a public forum.

At SkyDome in Toronto you can get seats in the outfield right over the bullpens. I sat above the visitors' 'pen for a game during his Cy Young Award season, and got to my seat early enough to watch him warm up before the first pitch. He was so fluid, viewed from overhead, so mechanically flawless, and the sound his pitches made thocking into the bullpen catcher's glove seemed to probe some thoracic concavity I hadn't been aware I possessed. He went out that afternoon and one-hit the Blue Jays, giving up just a solo homer – Jose Bautista's fiftieth of the year – and lost 1-0. That about summed up his season – heroic in the face of defeat, often looking like the only capable one in his side's uniform.

But everything wound down, and on the final Thursday night of the season just concluded, he was due to start against Oakland (why are the Mariners always playing the A's?). Nobody in a position to offer him a contract was willing to state with certainty that it was his last game in a Seattle uniform, but it didn't take tea leaves to read that future. This was his swan song, and everyone knew it.

I've reached the age when staying up late requires advanced planning. I put all the pieces in place leading up to that Thursday night because I didn't want to miss what was due to happen.

I don't know what links us to the players we take as our own, why certain guys end up our favorites. Felix is a neck-tattooed Venezuelan whose emotions bubble only just beneath the skin; I'm a pale Canadian with the reserve to match. There's a decade separating us. And yet I feel emotionally bound up in his career. By that I mean that I don't just enjoy the way he pitches; I feel a kinship with him, some kind of human attachment which is absent when I consider 99.9% of other big league ballplayers.

Why? It doesn't make sense. It just is.

So that'll have to do as an explanation as to why I dressed up in my Felix jersey and M's cap, made popcorn, and chilled a six-pack ahead of his last Mariners appearance, which wouldn't start until bedtime in my Eastern timezone town.

I watched Felix struggle through the first inning, wherein he walked three batters and surrendered a base hit which scored a run. My heart ached with the knowledge that time is implacable and will claim us all as he gave up a two-run homer in the second inning. I drank four Old Milwaukee tallboys. I kept a scorecard. I cheered – out loud, though the rest of the family was asleep upstairs – for each of his three strikeouts, and I cried, reader – fully bawled – as he did, when his manager came out and relieved him of his duties with one out in the sixth inning. I cried in a way which certain grown men feel permitted to do when someone in a baseball uniform does something beautiful, or unprecedented, or does anything for the last time. Felix cried in a way you don't often see an athlete emote. It was so plainly and beautifully human.

And that, I now think to myself, is probably what made Felix Hernandez so appealing. He was a kid when he arrived – 19, and seemingly overawed by the flash and heat of big league life. He was good. That was clear. Better maybe than the Mariners deserved, if they weren't going to build a winner around him. But for fifteen years he maintained a loyalty to the fanbase and the organization that was first loyal to him, and when one part of that equation suddenly disappeared – when the Baseball Club of Seattle, LP, deemed his services insufficient to justify his compensation – he hurt, and he cried in public. And in that way, I think, he's one of us, caught in the mechanisms of late capitalism's asymmetrical exchange, giving away our best years, showing more loyalty than we are ourselves shown by the institutions and employers and brands and bodies which crowd our lives, even if we're capable of uncommon brilliance every fifth day.