The Bird of Love and Loyalty 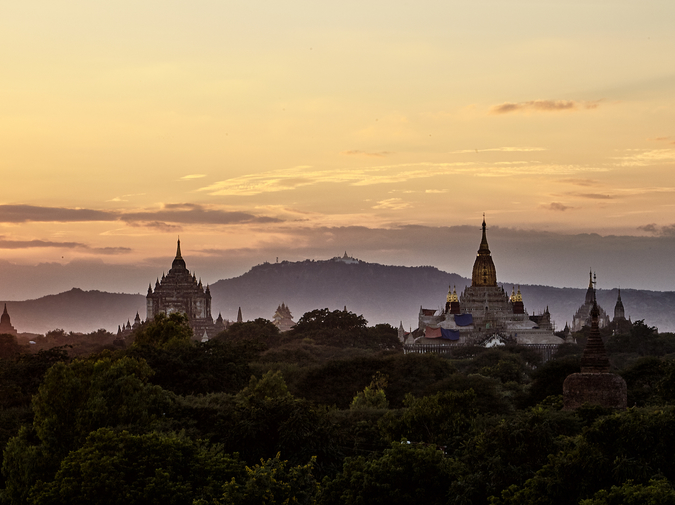 We spent the next two days in awe of teak trees and elephants as planned. Nothing would deter us. In the forest, we rode with the elephant masters out in big loops through heavy timber and shallow streams. It was like a rowboat, the constant rocking, the cluck of wooden bell under the neck of elephants, gentle push and nudge of the mahouts, glimpses sometimes of distance and light, Andrew and Yan ahead on one elephant, me and Myint behind on another, the steep hills with the old-growth trees inaccessible to loggers, the country wild and humid. There must have been a path, though it felt as if the trees and vines parted only a few feet before us, and then closed just a few feet behind, like we were slipping through some magical curtains of the world, everything up-close and green and brushing up against us all fragrant and cutting as we went.

A dry streambed and we followed it down to a gravel wash of riverbed, the area spread wide and bright with that sudden pour of sun, our elephants striding side-by-side along the small brook of water. The river’s flood-line ran far over our heads, dead sticks and straw and plastic bags tangled in branches where the surface of the river in the rainy season would be. This whole empty spread would be full of water—it had been full of water—and it felt as if we were moving along the bottom of a river, and all that imaginary tonnage moving in another place and time, like we were ghosts coming back to this phantom river. Yan named plants and birds as we went. He explained what each thing meant, what each item in the landscape was used for. Mangrove leaves were good for an uneasy stomach. Tamarind bark would be used to dye the robes of monks. Myint pointed out a kingfisher in a tree ahead. He pointed out the sound of the frogs in the grass. A gust of parrots flew past, and then later a hornbill, and then later an egret. Egrets had white feathers and black skin and were the bird of betrayal. Hornbills had only one mate for life and were the bird of true love and loyalty.

“When the companion bird dies,” as Yan told it, “the remaining hornbill will fly straight up in the sky and fold its wings and suicide straight down to the ground.”

William Lychack is the author of a novel, The Wasp Eater, a collection of stories, The Architect of Flowers, and the forthcoming novel, Cargill Falls. His work has appeared in The Best American Short Stories, The Pushcart Prize, and on public radio’s This American Life. He currently teaches at the University of Pittsburgh.

Yan Naing Htun is a guide and photographer based in Mandalay. A member of the Upper Myanmar Photographic Society, he is working on a book of photos chronicling the many changes in contemporary Burma.