The Art of Fiction Skateboarding

an interview with Kyle Beachy, by Aaron Burch 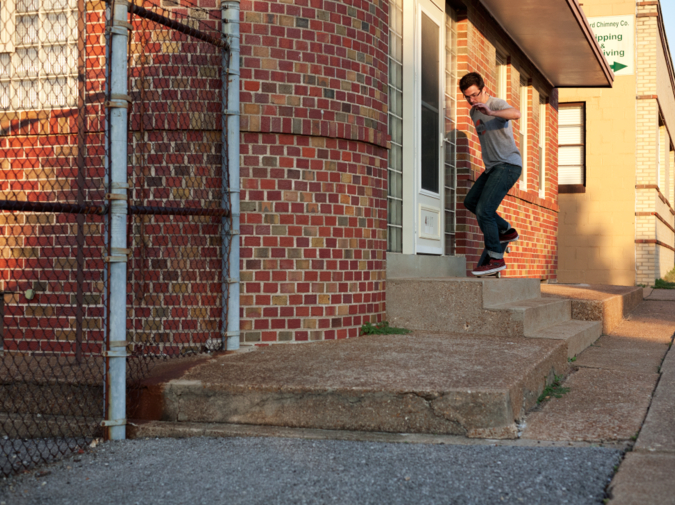 HOBART: For context, I’m going to start broad: can you cite one quote about skateboarding (about skating, or by a skater) that could be applied to writing? Or your own favorite sentence or passage about skating? Or, kinda converse to the first question, a fave fiction passage or some writing about writing that makes you think of skating? (Feel free to choose just one of those; or if you're really inclined, answer all three; or find some way to intersect those different questions into one.)


Beachy: A photographer named Craig Stecyk covered the early Dogtown days in broadly grandiose language that aimed to define skateboarding as an act much closer to art than sport. "Two hundred years of American technology has unwittingly created a massive cement playground of unlimited potential," he wrote. "But it was the minds of 11-year-olds that could see that potential."

We could call this the Spike Jonze phenomenon, which focuses on the slightly off-kilter way that skaters process and react to the objective world. And it’s true enough, but skaters themselves tend not to think about what they're actually doing when they skateboard. Because they can't -- the activity is difficult and risky and can be the source of great dissonance if it reaches the point of cognition. Here's Mike Carroll, coming back from injury, in the intro to his part in Modus Operandi:

I think about what is this crack gonna do. Okay, what if I don't get my foot on in this position? Am I gonna hit my shin first, or how am I gonna fall? And where am I gonna have to put my hand to break myself from the fall. And then what if I hit my tooth out on that corner right there?

Skaters are simple by necessity. Marty Murawski recently told me that his strategy when he goes out skating is to "do something that the little kid version of me would clap for." Which totally capsizes what for me is the paralyzing part of fiction writing, constant self-evaluation.


HOBART: OK. Quick clarification:  Is what's implicit here that Carroll is thinking these thoughts because he's coming back from an injury, and this overthinking is now...  making him a lesser skater? I’m asuming he didn’t think like this before? As a skater, what do you (and others) think/how do you respond when you hear this line of thinking?


Beachy: Well, I cut that quote off early. The intro to this video part of his actually ends with Carroll's speech laid over this grainy footage of him rolling up to a handrail, skidding to an exasperated stop and throwing out his hands, all frustrated. "It's a little bitch-ass excuse," he says, "but whatever."

Skateboarding is terrible for the human body. There is no way to spin it as a healthy or wise activity. Injuries are unavoidable, and each one has the potential to cast a wide, dark pall of doubt over a skater's confidence. We all know that it’s a stupid thing to do. Carroll's is a common response: in order to power the body through the nauseous fact of what can and does frequently go wrong during any trick, you’ve got to get your head right, which means, essentially, turning it off.

And so the "little bitch-ass excuse," a weakness to overcome by way of "whatever." Stop thinking. You'll hear a lot of "bitch" and "pussy" among skaters, which I won’t defend. But it is indeed a kind of war, which is essentially the body trying to beat the mind into a kind of mute stupor (it's not uncommon to see a skater punch himself in the head), and is of course completely unnatural. We're attempting to shut down the basic preference toward preservation that our bodies evolved over millennia. As you can imagine, this task gets progressively harder as you get older and shed that idiot confidence of the teen years. The mind gets louder.


HOBART: That makes sense. Getting back to Murawski saying his goal is to “do something that the little kid version of me would clap for." As I was reading, I got all excited -- “yes! both in my own writing and with Hobart” my (albeit usually unstated) goal is often just to do something I myself would find rad. But then you come in and sweep the legs out and say that is the “paralyzing” part for you, which makes sense, too, but also reminds me of many of my own writing frustrations (difficulties at turning off inner editor, etc.).


Beachy: I tried to get at this issue in an essay for the The Chicagoan. After I read The Pale King I decided to drive to Peoria, IL, with my skateboard. I found two skateparks there and both were very dumb. So I drove around Peoria Illinois and thought about boredom and fun and unfinished manuscripts, and eventually ended up downtown along the river as the sun was setting and one of our gorgeously brutal thunderstorms was rolling unstoppably in from the east. I'd come hoping to use skateboarding, which is the most fun thing I know, to reframe my approach to fiction writing. The storm was a convenient metaphor. What happened, technically speaking, was that I ate shit. Then it started raining very hard.

And still it was fun. So my point is that the really vital common denominator between writing and skateboarding isn't creation, or reinterpretation, or translation of the world. It is failure. What the activities have in common is the blood they draw, or at least should draw if we're doing them right.

HOBART: It seems like some of what I'm reading in the above (or at least what I'm trying to read into it, in part trying to summarize and synthesize your answer and probably part laying my own thoughts overtop it...) is that skateboarding is best (most fun? most innovative? most pure?) when you're not thinking about it but just doing, a kind of instinctual action and pure subconscious.

One, do you think that's true, to some degree, or am trying too hard to read it through my own lens? (Or some of both?)

And, second, with your anecdote about Peoria, I wonder if some part of the reason you "ate shit" was because you were trying too hard to force epiphany? Which leads me to wondering if failure isn't the only common denominator between writing and skateboarding, but if they also share some kind of... beauty through non-thought? I mean, both require endless practice, and both certainly do require plenty of thought, but I wonder if they don't also tap some kind of similar perfection through subconscious when, for a moment, everything else is washed away?

Beachy: Go back to that example Mike Carroll trying to ollie over the handrail down those stairs. The first wave of doubt comes during the approach, as you're rolling up to the stairs – you either convince yourself to ollie, which is dangerous, or abort the attempt by skidding or turning away, which is safe but, per Carroll, crazy-making.

The second wave occurs once you're airborne, and when it comes there are once again two prevailing options. The first is trying to land, which is dangerous because any slight misalignment of weight distribution or feet location will lead to your body being thrown and abraded by the street, or you roll an ankle or crack open your fragile little human skull, or whatever. Landing wrong means hurting. You can imagine how this gets more complicated when you're flipping or spinning the board as you fly, then catching it with your feet, then landing. The second option when you’re airborne, which is the much "safer" option on a purely instinctual level, is to kick your board out of your way, aborting the attempt, and landing on your feet.

The kind of soft paradox about all this is that injuries are actually more likely when you fall prey to the misguided instincts for the second, "safer" option. You’ll kick away the board and it’ll land weird and pop up and hit you in the face. It happens time after time -- we hurt ourselves the worst, and most stupidly, when we doubt our capacity to just do the trick. Way too often, I'm personally able to equate thinking with doubting. The reason I ate shit in Peoria is that I got spooked and bailed and ended up with an elbow scraped raw. I thought when I shouldn't have.

This is careening toward the realm of self-help, but there's something to it. Writers of course suffer endless tides of doubt. For us, kicking away the board could mean settling for the pat, neatly causal narrative sequence to create meaning. Which we know people like to read. Or repeating the same syntactic patterns that we know we’re comfortable with. Or it could mean aborting the manuscript all together.

And I guess for me what I need to get back to is, yeah, what you’re calling beauty. Doing the thing as thoughtlessly as I can, knowing that there’s a future me who is a relentlessly critical asshole just waiting up there to review the work once it’s done. This is another big thing the two activities have in common -- the first thing a skater wants after landing a trick is to check how it looks on film. It’s a little vain-ass habit, but whatever.

Kyle Beachy is the author of The Slide and an assistant professor of English and Creative Writing at Roosevelt University, in Chicago. His essays and fiction appear in The Chicagoan, Knee-Jerk Offline, Another Chicago Magazine, FiveChapters, The Late American Novel: Writers on the Future of Books, Pank, and elsewhere. He has received fellowships from The Danish Arts Council and the Bread Loaf Writers' Conference. His skateboarding criticism appears semi-regularly at The Classical.