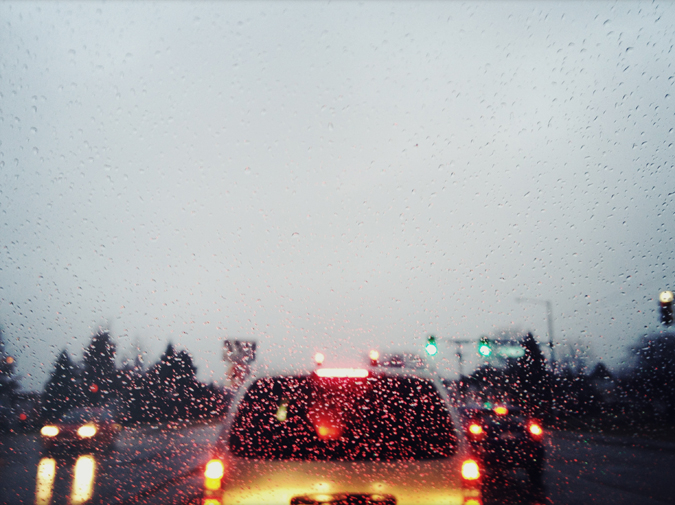 Driving westbound on the Massachusetts Turnpike’s thirty-mile Berkshire run between Exits 3 and 2, on a late October morning after a rainy fall when the foliage never achieved much grandeur, only muted oranges and burnt-out reds and dusty greens amid curled-up browned leaves, much of the foliage now stripped from the branches anyway so that the bare white birches rising roadside are more visible than the top of the illuminated McDonald’s / Gulf rest-stop sign lost in low fog, the morning’s drizzle just enough for slow interval wipers, I climb in light traffic past Blandford into Otis, the wind-ravaged trees here stunted and crook-limbed, the fog lower and lower until even the mile markers and the tops of the eighteen wheeler’s trailers fade into it ahead of me, cruising at seventy-some miles per hour, running lights catching the guardrail’s white reflective strips, the massive three-bladed 600 kW wind turbine absent amid clouds, a few hilltop leaves’ reds vibrant against the utter grayness of asphalt and sky and dynamite-exposed granite and day itself, and the iPod spins up Flying Saucer Attack’s “Beach Red Lullaby,” a lossy file I digitized and ripped at 320 kbps, a fidelity almost as fuzzy as this weather, though even listening to the vinyl record (via nude, line-contact diamond stylus; 0.8 mV moving-coil cartridge; 1:5 amorphous-core step-up transformer; vacuum-tube phono preamplifier; etc.) I’ve wondered what Rachel Brook’s singing: “Red, red glow”?—“Red, wet glow”?—“the earth less whole”?—who knows: the track’s mix favors the guitars over her voice, and anyway she’s nearly whispering, but the four-minute song’s wistful melody and finger-picked guitar whelmed by wind-tunnel distortion accompany the drive and the weather and my mood, so I keep thumbing the steering wheel’s rewind button and letting it replay itself, again and again and again, before the iPod can shuffle away, even though the roadside sign warns “emergency stopping only,” and then the low-pressure system cycles in another wave of rain, the defogger warms the windshield and my face, and the car’s so comfortable I wish the landscape could recycle itself like that in a Hanna-Barbera cartoon and I keep driving endlessly through it, because everything’s both fleeting and worth preserving, especially these minor moments of self-awareness that rupture my tiresome routines, or because I don’t yet know that within twenty-four hours a freak early snowstorm will blow through these hills and split leaf-heavy trees and literally alter the landscape for good—“pics or it didn’t happen,” we demand of any unbelievable claim, a belief that the only real experience can be proven, and revisited, and ever since my phone’s included a camera I too have often wanted to stop and photograph something I’ve witnessed, whether sun-backed clouds over the Catskills or a coyote watching a cow herd in a pasture: the wish to stop time, to undo a moment’s happening, simply acknowledges that the camera lens, by making something seem worth capture, helps our eyes notice whatever imperfect beauties they might otherwise miss, but however potent my desire to make visible to someone else—even only my future self—the minor significances I’ve seen, I almost always refuse to stop for the snapshot, whether because I think I don’t have time to make make the document, or because I want the moment to exist only as memory and so sustain its unverifiability, or because I know that no one else can value my own abstracted reveries in a way that will affirm what they mean to me—but already I’m descending the hills’ far side, passing the pond in Becket, ducking the Appalachian Trail’s overpass, and the yellows of phragmites and greens of tiny pines emerge from the gray now resolving itself into layered clouds stretching ahead toward the Taconics, and plumes of mist rise from the Housatonic valley as a string of eastbound headlights approaches the past I’ve just exceeded.

Joshua Harmon's The Annotated Mix-Tape will be published by Dzanc Books next year. Other essays from the book appear in Best Music Writing 2012, The Believer, Black Warrior Review, Cincinnati Review, New England Review, The Normal School, The Rumpus, and elsewhere. He is also the author of two books of poems, Le Spleen de Poughkeepsie and Scape; a novel, Quinnehtukqut; and a collection of short fiction, History of Cold Seasons, also forthcoming from Dzanc.