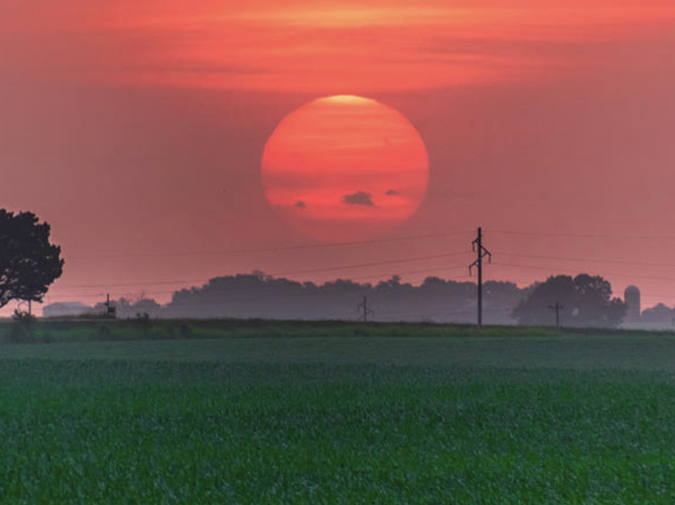 The aliens were everywhere that summer. We’d come around the corner of the barn and see one—well, almost see one. They always disappeared just in time. A tiny crackle, like static electricity. A white spark hovering for an instant before blinking out. Gone, into another dimension. You could feel their absence, the little hole they left behind in the humid air.

We were determined to catch one. We’d use all the tools at our disposal. Our eyes and ears, of course, but also technology and magic. In the morning, I’d walk up the dirt lane to the Flanagans’ farmhouse, and we’d gather on the porch or under the old apple tree in the yard. Johnny Flanagan had a portable cassette recorder that wasn’t supposed to leave the house, but most days he snuck it outside in case we needed to record something. His sister Lizzie had an Instamatic camera she kept strapped around her wrist, which she twirled when she was bored. Because without evidence, who was going to take us seriously? Not our parents, who merely humored us. When the time came, we’d go right over their heads to the TV news.

For the magic, we’d have to dig deeper. I’d decided that this was my department, and neither of my companions had challenged me. “To catch the aliens, we have to become like them,” I said. “We have to think like they do.” So we went out to the old Model A pickup at the edge of the woods, where we did our best thinking.

Johnny, being the eldest present, took the driver’s seat. (Their big sister, Mary Theresa, an imperious thirteen, had abandoned us that summer in favor of her horse, Dixie.) I rode shotgun, and Lizzie stood in the rusted-out flatbed, elbows leaning against the wooden slat that separated it from the cab. Two of the three Flanagans and me.

I stood so they could both see me, and because my dad was a professor. If the Model A had been equipped with a blackboard, I would have used it. “We already know the where,” I said. “They’re all around us. What we need to figure out is the how and the why. How do they get here, and why are they here?” I had practiced this speech in the mirror and was rather proud of it, so I was annoyed when Lizzie’s hand shot up.

“What about the when?”

“How do we know if our now and their now are the same one?” she asked.

“So you’re saying they could be time travelers, not space travelers?” said Johnny, turning to face Lizzie but keeping his hands on the wheel.

“They could be both,” said Lizzie.

“Like that show,” said Johnny. “You know, the one with the astronauts and the cavemen?”

They began to sing the theme song, swaying their heads from side to side in time with the music:

It’s about time, it’s about space,

It’s about time I punched your face!

These were our lyrics, adapted from the original. Also, we were getting off script. I tried to reel us back in.

“The main thing is, we need to know what they want.”

“I thought you said it was about the how and the why, not the what,” said Lizzie.

“Well, yes, but the what is really a what for, which is the same as why,” I explained, not without exasperation.

“Seems to me,” said Johnny, “that the real question is who.”

“The who would give us the why and the where,” said Lizzie.

“And the when,” said Johnny.

“So really,” said Lizzie, “it’s all one big question: whowhatwhenwherewhyhow.”

I opened my mouth to say something but was interrupted by the sound of hoofbeats.

Dixie came galloping along the path that separated the cornfield from the woods. On his back sat Mary Theresa in full English riding gear: domed helmet, blue blazer, white pants, knee-high brown leather boots. Horse and rider passed within feet of my side of the truck, but neither so much as glanced in our direction. They bounded away, growing smaller. My heart shrank along with them.

Did I mention that I was in love?

I turned just in time to see Johnny wink out, followed by Lizzie. Two sparks hovered and danced in the air above me, then drew together and chased each other in a circle, going faster and faster until they formed a ring of light. The ring expanded outward, encompassing the woods, the field, the sky. And then it disappeared in a flash, leaving in its wake an emptiness that lingers inside me still.

I’m standing in the tall grass at the edge of the field, alone. Even the Model A is gone except for the steering wheel, which lies at my feet. I pick it up and head in the direction of the farmhouse, clutching the wheel in both hands as though piloting an invisible vehicle. The languid air is disturbed only by the insistent churring of cicadas. As I walk, I think about what I’m going to tell Mr. and Mrs. Flanagan, my parents, the TV stations, the world. There are no photos, no tapes, nothing to document what is no longer there.

The shortest route to the house is a diagonal through the cornfield, so I plunge in and cut across the rows, each one a converging corridor. The cornstalks arch over my head, blotting out the sun. Their emerald blades slice into my arms, leaving a latticework of paper-thin cuts. I walk for a very long time, so long that when I emerge, still gripping the wheel in my lacerated hands, the farmhouse is long abandoned, its roof collapsed, tree branches sprouting from the empty windows upstairs.

D. L. Updike's work has appeared in Philadelphia Stories, Daily Science Fiction, 365 Tomorrows, and Grimoire, among other venues. His story "Feral Wives" was a winner of the 2020 Marguerite McGlinn Prize for Fiction, judged by Karen Dionne. When not writing strange fiction, he runs the publications program at an art museum in Philadelphia.