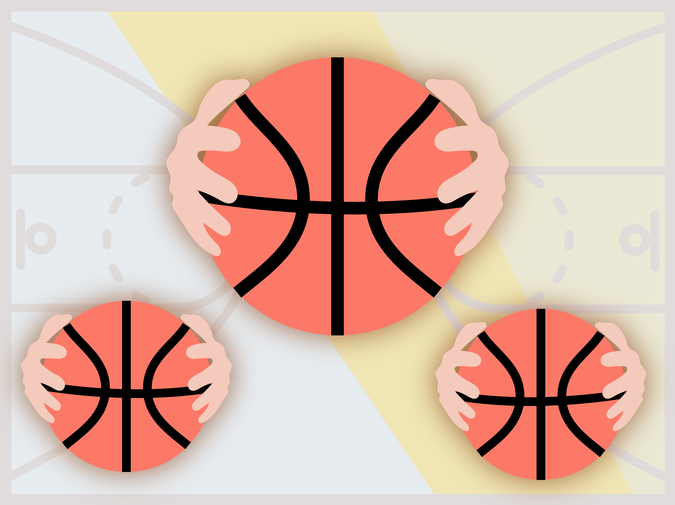 The man I love who does not love me back sends me someone else’s tweet. The only text is a hashtag: Notre Dame. The video hasn’t loaded. A week before, the Notre Dame women’s basketball team made it to the National Championship, losing by one to Baylor. I assume the clip will be a highlight reel of their season. But instead, the video loads and my screen fills with smoke. The real Notre Dame is burning.

When I was a kid, my father would interlock his fingers like he was hugging air. His arms, perpendicular to the ground, resembled a mouth agape, but were meant to be a hoop. Which shot has a better chance of going in? he’d ask. With my brother’s fist acting as a tiny, jagged basketball, we would trace the path of a line drive right over the rim. Then, the path of a ball that wasn’t in a hurry. It would float up some of the way before following gravity’s lead and swan diving, with an imaginary woosh, through our imaginary hoop. Every shot can be missed left or right or long or short. But if you shoot the ball high and shoot the ball straight, my dad would say, you’ve eliminated two of the four failures. Two whole balls can fit through a hoop at once if they’re dropped right down. That’s a lot of room for error.

Here’s a trick: take a thick black marker and draw a line that could cut the basketball in half, intersecting at right angles the lines that come standard. If it’s a Spalding, split the L and the D—a Wilson, the L and the S. Your longest fingers should be on this line when the ball is cupped in your palm and should be the last ones to touch it as you launch the sphere into flight. The ball should spin backwards while in the air. If it’s spinning right—spinning straight, that is—the line will barely wobble.

All through middle school, I’d cup my marked-up basketball in my palm just before bed and flick it to the ceiling with my wrist. When you do it well, the ball comes right back down, landing softly where it started, the black line a picture of precision. Sometimes the ball would hit the wall behind my head or I’d shoot it too far forward off my bed or the line would go squiggly as if to mock me, but I kept practicing. Every night, I followed through, then followed through again. I wanted muscle memory. I didn’t want to miss. I wanted control. This was before there were men I loved who didn’t love me back, before every corner of the world seemed to be burning.

Muscle memory. With three more anecdotes, maybe three more sections, a few one-liners brimming with wisdom, we could call this an essay. We could pretend I’ve learned something, captured something. That I’m in control, even if just of the chaos. Stories are inherently lies, I wrote once. People pretending to know why things happen, what details are important. “That’s the most depressing shit I’ve ever read,” a friend told me after reading this theory. But everyone wants to talk about narrative arcs, and when I think arc, I think incomplete.

What my dad didn’t tell me: Michael Jordan misses more three-pointers than he makes. Ray Allen, the man who’s dropped more balls through the net from downtown than anyone else, misses a full 60 percent of the time. Vince Carter’s percentage is only 37. Carmelo Anthony, 34. And these guys are the best. Where does that leave the rest of us?

The man I love who doesn’t love me back lives adjacent to a street that’s been taken over by climate activists. We walk down the middle of their encampment close to dark. The next day, he’ll pin their logo to his backpack, inspired by their engagement—their belief in change. Notre Dame was an accident, but what about California, where the man I love lived while I was on the opposite coast, in bed, following through? Last year, 8,527 fires burned almost 2 million acres of the state—its most destructive year ever. To say people had no control, have played no role, in the steadily growing list of climate catastrophes, would be an even greater lie. (Great shooters aren’t born, my dad told me. They’re made.)

But it turns out the story I told myself about me and the man I love was a lie. I don’t mention Ray Allen. Besides, love, when it comes to other people, is a lot of things but it is not control. Besides, there are wildfires to tame. I walk towards them.