Take a Bow and Accept the Bouquets: My Struggle with My Struggle, Book 3 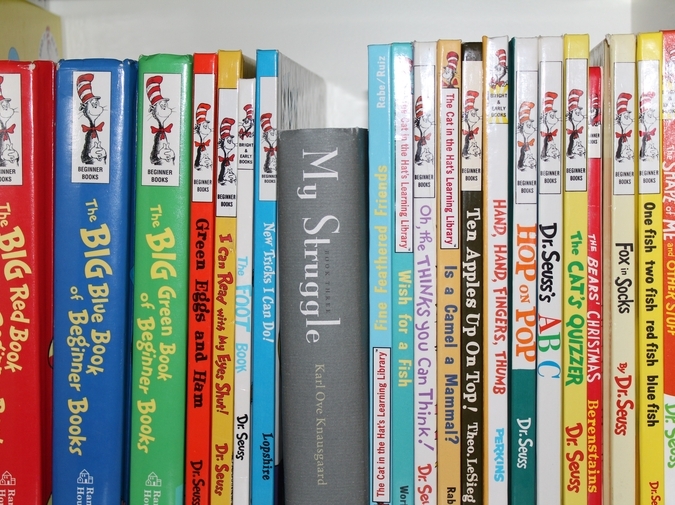 Coincidentally, I read the third book of My Struggle in the two weeks leading up to my daughter’s third birthday. The coincidence is that my daughter was experimenting with a particularly annoying set of behaviors – incessantly whining, gleefully saying “no” to small requests, intentionally shitting in her pants, hysterically fighting against attempts to bathe her or comb the tangles out of her hair, picking out the laborious Magic School Bus books for her bedtime stories, and a parade of other, very irritating but typical forms of toddler rebellion – while in my free time I was reading Karl Ove Knausgaard’s description of how his father emotionally and physical tortured him throughout his childhood.

When my frustration peaked, I’d say to my daughter, “You’re pushing me at the worst time. I’m reading My Struggle, Book Three, and Knausgaard’s father is a very influential character.” That joke was the easiest way, at such moments, for me to defuse my own anger. I’d walk out of the room, let her cry a bit, then come back, and together we’d “calm down,” her phrase for sitting in my lap, letting me kiss her on the cheek, and smiling through her tears as I tell her how much I love her. Within a minute, she’d squirm out of my embrace and happily return to her books or her blocks or her dress-up clothes. We cycled through these tantrums and reconciliations on what seemed like an hourly basis.

One of the most harrowing moments in Book Three comes in the small intermission that Knausgaard takes in the middle of the volume, giving himself and his readers a respite from his father’s dominance over the proceedings. He wonders why his mother, depicted in small glimpses as a loving and affectionate parent, is so absent from his childhood memories, while his monstrous father commands virtually every scene in the memoir. The answer is fear:

[She] was there, Dad’s darkness had a counterbalance, I am alive and the fact that I do not live my life to the full has nothing to do with the balance of my childhood. I am alive, I have my own children, and with them I have tried to achieve only one aim: that they shouldn’t be afraid of their father. They aren’t. I know that. When I enter a room, they don’t cringe, they don’t look down at the floor, they don’t dart off as soon as they glimpse an opportunity, no, if they look at me, it is a look of indifference, and if there is anyone I am happy to be ignored by it’s them. If there is anyone I am happy to be taken for granted by, it’s them. And should they have completely forgotten I was there when they turn forty themselves, I will thank them and take a bow and accept the bouquets.

My wife and I have read dozens of parenting books in the last three years, and none of their expert authors endorses a parenting philosophy remotely close to Knausgaard’s.

There will never be a movie version of My Struggle. Then again, I would have sworn that there would never be a film adaptation of a Thomas Pynchon novel, so my prediction could be wrong. If My Struggle, Book Three were filmed, though, the actor playing Knausgaard’s tyrannical father would be a lock to win the best supporting actor Oscar. He steals every scene in which he appears. In the rare episodes when he is absent, which tend to be the happier moments of the book, I still palpably feared that he would suddenly show up and inflict some unfair punishment on the poor boy. For example, Knausgaard relays how much he loves spending time with his grandmother, relishing the way she dotes on him during her visits. She gives him an extra apple on the last day of one such visit. That night, Knausgaard’s father forcefully wakes him up and asks, “How many apples have you had today?” Soon, the boy is dragged out of bed and forced to eat apple after apple after apple to repent for his gluttony. After reading that scene, I texted my brother, who is also reading the My Struggle books, that “Knausgaard’s father is like a character in a Stephen King book.”

Or I might have sent that text after Knausgaard almost freezes to death watching his father maniacally chop firewood, or when Knausgaard’s father beats him mercilessly for the crime of hiding candy under his bed. It’s hard to remember, because the atrocities blend into each other. I do remember the exact scene that forced me to put down the book and find my wife, whose childhood was much harder than mine, and whose father shared some qualities with Knausgaard’s. She was in the kitchen, sipping tea and scrolling through emails, and I hugged her from behind before retelling the corn flakes episode. My run-on-sentence retelling sounded like a child’s version of events, because I think I was still in Knausgaard’s world. I think I was still experiencing Knausgaard’s terror: “So he wakes up, and his mom and older brother have already left, so he’s all alone in the kitchen with his father, and his father pours him a big bowl of corn flakes before leaving him alone in the kitchen, and then when he tastes the cereal he realizes the milk is sour, but he’s so afraid of his dad that he just keeps eating the cereal, and then his dad comes in and says, ‘That looks good, I’ll have a bowl myself,’ and then you’re really scared about what’s going to happen once the father realizes that the milk is sour and a second bowl has been wasted, because the father always goes crazy whenever they waste money, and then when the father tastes the cereal and spits it out, he looks at his son and is so aware of how terrified his son is of him, that he would rather eat sour milk than say anything to him, that the father stands up, pours out both bowls of cereal, gives Knausgaard a bowl with fresh milk, and then leaves him alone in the kitchen. It’s like the saddest thing I’ve read in a long time.” And the sadness, I think, is shared equally between father and son.

Towards the end of Book Three, Karl Ove’s older brother, Yngve, consoles him with a song by a Norwegian band, The Aller Værste!, titled “No Way Back.” The chorus of the song, to which Yngve makes Karl Ove pay particular attention, goes, “All things pass – all things must decay. You go to sleep; you wake up to a new day. No way back now, nuthin’ to thank you for. Nuthin’ to say, there’s your coat, there’s the door.” Knaugaard writes that his brother played him this song and shared its message of empowerment to cheer him up after a messy, pre-adolescent break-up. Still, it’s easy to see a deeper meaning in the brothers’ shared connection to the song and its lyrics. They will survive their childhoods. They will get away from their father. They will not be like him. The scene of the two boys, sitting on Yngve’s carpet, listening to Norwegian new wave music blasting off a record player, is one of the brighter moments in Book Three and almost made me forget about the hundreds of pages Knausgaard devoted to the impact of his father’s death in Book One. Almost.

I am standing above my daughter and throwing a football, as hard as I can, at her stomach. It’s not what it seems: the football is made by the company that makes Beanie Babies, and this plush “Beanie Ball” has the consistency of a foam pillow. She is laughing hysterically, and, through her giggles, she implores me to throw the ball harder and harder with each attempt. It’s an easy game to play, as it allows me to practice my throw-a-spiral grip. And it’s an easy game to play, because I can release some of my frustration with her in a productive manner. I am co-starring in her childhood, as the adoring father whose anger is just an act during a game of “catch ball.” The ball actually belongs to her baby brother, and someday she’ll lay him down on the floor, stand above him, and peg the toy directly at his chest. Perhaps she’ll do this as a constructive way to deal with her own anger. Or maybe she’ll just play the game as a way to “be like daddy,” entirely unaware of how meaningful that phrase can be.

The only time my father ever hurt me or my brothers was when he bathed us. The sight of any black and blue mark would set his pediatrician’s heart into a panic, conjuring up fears of leukemia, so he’d press hard on our bruises to ensure they hurt. He’d do this so forcefully that my brothers and I often hid our black and blue marks under the foam of the bubble bath. Eventually, my mother convinced him to limit his exams to the bruises we couldn’t explain, and we started taking showers instead of baths. My father, though, is otherwise mostly absent from my childhood memories. It’s only when I’m bathing my own kids and scrutinizing their bodies for inexplicable bruises that I remember the way he once hurt me and yearn to be like my daddy.