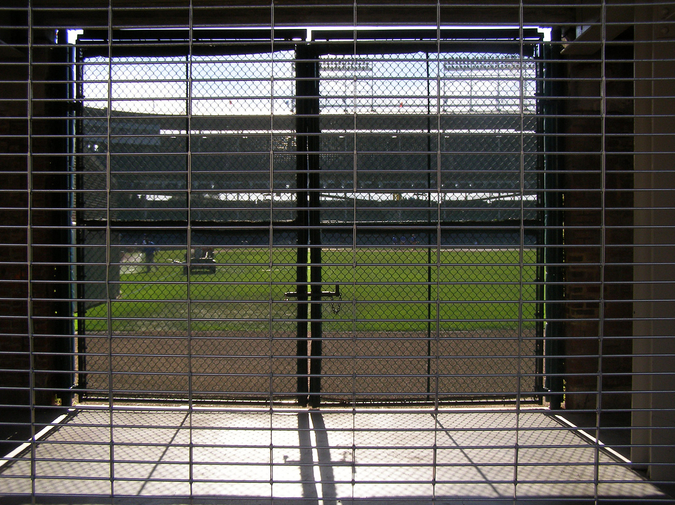 The hunted man, drunk and in debt, abandons his boy in a lightless alley.  The bad men are gaining ground and so he pulls the car over, runs to the passenger side and yanks the boy into the black.  The man believes his brother’s place is close, but tequila and fear do not make for a strong navigational team.  He kisses the boy’s forehead, hurries back behind the wheel.  Tires squeal as he peels away, the sound startling awake a pair of moody, homeless Dobermans.

The boy does not realize he possesses fast twitch fibers personally twisted to taut by the Almighty.  He does not understand that his talent, like Michael moonwalking across a stage, could transcend time.  He is just a scared boy screaming for his father.

The dogs come closer.  He grabs a piece of wood from a pile of trash and tightens his fingers around the plank.  Oscar knows only what instinct suggests: to survive he must swing.  And so he does, violently, each beautiful hack ripping open dog flesh and leaving the beasts no choice but to bleed and shriek and retreat into the darkness.

It’s something from the mind of a madman.  A rusted-out shell of a Chevy C-10 affixed to fifty-five gallon drums.  Aside from swallowing seawater and vomiting salty bile over the side, they float for three days without incident.

But that’s all over now.

The chopper is so close the propellers make the water hemorrhage and the truck boat spin.  The teenager does not understand the voice coming through the bullhorn, but when the first Cubano strips naked and jumps in, the bullets start whizzing.

The coast guard is closing in.  They are supposed to avoid violence, to pursue and detain peacefully, but the water is an unpredictable jungle.  The water is war and the one behind the gun does not want the Cubans reaching American soil.

As the chopper hovers and the vessel rocks and the men scream, a bullet destroys the abdomen of a fat man named Ramon.  His eyes widen before he falls to his knees.  Blood flows through his fingers like oil from the belly of a punctured drum.  Oscar thinks about reaching up and grabbing the rope ladder dangling from the chopper, about getting lifted towards the brilliant, blinding sun.  But in the water his uncle bobs up and down yelling a single word over and over – beisbol, beisbol, beisbol!

Oscar’s a good sport.  Sings eighties rock in broken English on the bus, totes around the pink Barbie backpack stuffed with chew and seeds and gum.  His minor league teammates haze every newcomer, but with him they feel unholy.  Not because he’s sixteen, but because, inherently, they know.

Watch him field groundballs, his hands in soft, perpetual motion.  Watch him drive pitches to all parts of the field, the ball rocketing off his bat in a way that makes lifers stop and stare and scratch balding scalps with tobacco-stained fingers.

After twenty games he’s hit in twenty straight, his average creeping towards .600.  The press takes notice, but the press in Pawtucket is a group of fat men in mustard-stained shirts.

One is a freshman intern from Boston College.  Carla.  The girl with the hips and the lips and the cocoa bean eyes that burn with an intensity to know him beyond just the magic he makes with a bat and ball.

The lights fascinate him most.  Not the brilliant home white uniforms, like crisp linens at a fancy hotel, or the screaming fans or the clubhouse spread.  Lights.  Towering stanchions reaching to the heavens as if the stadium is a vessel, as if the game is a gift on loan that will soon be called home.

He collects a pair of doubles his first night at Fenway.  Two days later he smacks a homer that clears the monster and lands on Lansdowne.  Riding in the wake of his brilliance, the world loses its collective mind.

The big league reporters – still old and overweight but better about hiding their stains – ask what he likes best about America.  McDonald’s, he tells them.  Actually Carla, sitting next to him and translating, tells them.  Everyone laughs.  They ask, How can you possibly be this gifted?  He tells them hitting a ball with a bat is easy when you grow up swinging sticks at incisors pried from the skulls of dead dogs.

It happens on a home stand in April of his eighth season.  Patriots Day.  The fans at a fever pitch as he rounds third, the fastest player in history to reach three hundred homers.  He sees his uncle jumping up and down in the first row of bright red seats.  Next to him Carla is holding their son and doing a dance.  After touching home he walks over to his family.  The child is frantic.  He is two and yearning for the sanctuary of his crib and confused by the lunatics surrounding him.  Oscar kisses the child through the hard mesh fence designed for the fans’ protection.  He does not like kissing his boy through hard mesh.

Oscar stops tossing underhanded tennis balls, walks to where the toddler is struggling to command the bat.  It is July but the calls continue.  The world cannot understand how he can walk away from the cash and the fame and the shrine they would have erected for him in Cooperstown.  He is fascinated by their concern, but has no shits to give regarding their approval.  They say he’s owes the game his gift.  This makes him laugh.

He places his large hands over Oscar Jr.’s small ones, adjusts them on the slender handle.  The bat is a cello, a paintbrush, a woman, a razor, a fishing rod, a hammer.

His son throws it onto the ground and pouts.  He is not interested in hitting.  Not yet.  Carla watches from the patio, her arms folded atop a rapidly growing belly.  She waves and Oscar waves back.  Dinner is done but the sun is not down.  He could take the boy out on the boat or coax a kite to dance across the gauzy pink sky or fall to the earth and tickle him forever in the soft grass.

As long as the light remains the possibilities are endless.

Brendan J. O'Brien is a writer from Wisconsin. His work has has appeared in W.W. Norton's Hint Fiction: An Anthology, Akashic Books, Gloom Cupboard, The Molotov Cocktail, Monkeybicycle, Dogzplot, Stymie Magazine and others. His favorite t-shirt reads "Wendy Peffercorn is a Dime" and his happy place is box seats somewhere down the first base line. Find him on Twitter @mudvilleprose.