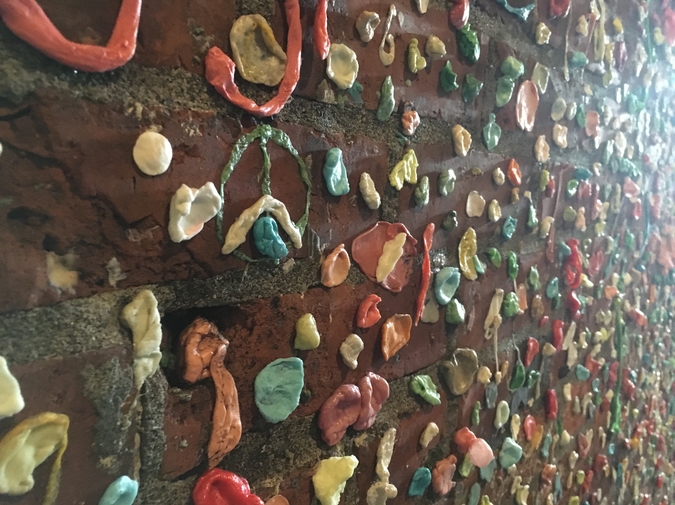 There’s nothing great about Surfer. It’s fourteen idiotic songs crammed onto a 7” disc. Titles like “Fun Things to Fuck (If You’re a Winner)” and “I Gotta Pee” and “Puke on Cops” should give you an idea of the lyrical complexity here.

But I love this record because 1) it’s great to pull off the shelf, as a sporadic record collector, and say, lookee what I got; and 2) it’s fucking fun.

I played bass in this nameless band as a sophomore in high school. Well, I say band. Really it was more a gathering of youths with varying degrees of musical competency (I might plod through a bass line like an old-time diver in iron boots trotting across a rotting boardwalk, but I had the attitude and orangutan posture of pop punk down pat). Regardless, our little quasi-punk outfit would bungle “The KKK Took My Baby Away” five or six times in rapid succession, then get high and stuff fast food down our zit-riddled gullets and call it a day.

We never took ourselves seriously. If we had, we probably would’ve ended up playing terrible ersatz screamo junk like 2/3 of the other bands at school. A golden age of teenage rock this most certainly was not.

Instead, it was all a goof. And when our nameless band dissolved a month or so after forming, it was no big deal. We formed other band with other kids. We tried different computations, trading instruments to see who could play what. I remember faking my way through a few so-called practices on the mandolin, and learning to plunk just enough piano chords to lay down a good bit of old fashioned melodic bullying.

We wrote songs quick and off the cuff. The aim was never to win a Grammy or a Battle of the Bands or even the respect and adoration of our classmates. All we wanted was to crack each other up.

We formed these little bands because we loved music and loved hanging out. So why not hang out and make music?

And this is exactly why Surfer is so much fun. “Recorded learned and mixed in two days” sounds like exactly the sorta shenanigans we were all about. I mean, this piece of shit is essentially the vinyl version of your friend warbling abusive nonsense over the radio on the way to the beach – it’s awful in a way that just makes you smile.

Sean Christopher West wears many hats, but is currently wearing a Sixers hat. He writes comics with artist Nathan Hurst, and is occasionally active on Medium. He lives in South Philly.