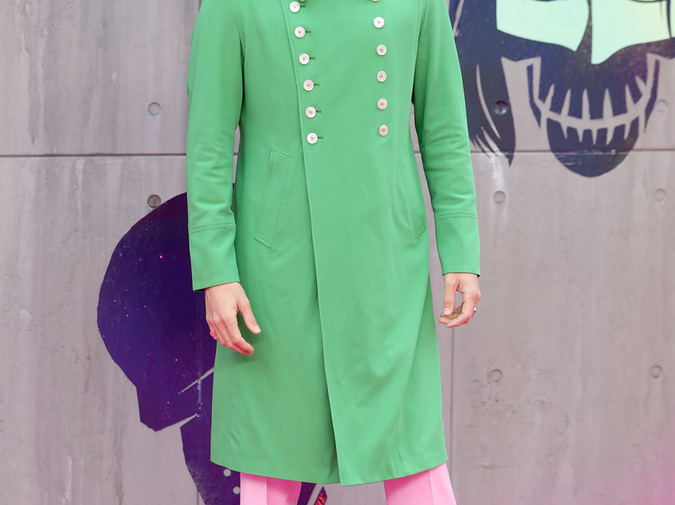 The probably academic amount of editorial peer reviewers assigned and made millionaires while snipping together this mass market event (which doesn’t earn even a literal translation of the action its title implies, or especially deserve to dwell in the same syllable set) should have burned the cigarette cue marks into themselves instead of the film reel. Suicide Squad is a study in the hubris of thinking you can erode a statue with piss just because you’re addicted to soda. The sky rat flatulence visited upon poor Heath Ledger is some true villain on villain crime. Not that you’ll catch me reading a comic, unless something deeply unheroic is transpiring within its baby fat, but Ledger’s interpretation of the Joker as a Waitsian splenetic hyena, as an abject Conrad Veidt laid over a main streamish but not too distracting caper, has been vitiated by music video pileup number fuck-the-lord-in-his-hashtag. A dollop of that maniac’s talent was funneled into the chokepoint of their conveyer. Since when could you write an essay about the performativity of an actor’s tongue and not have to masturbate any more than twice? Who would have guessed The Dark Knight would be considered a fucking art film eight years later? But that’s the inside-out skid mark we've willed around our lungs, because being part of a squad is back in style. Collared by entertainment this hamstrung, snitching on our own thoughts, there is no cinema to dismiss. All the shows are in your palm now and why would you want to grip anything prickly? Sorry your dick pad ain’t an art yet. Can’t gobble your own binoculars forever. The only backlash left to unleash is an app for assisted suicide. A quality, if latently fetishistic with authoritarian drool, filmmaker has toppled, wallet over technique, and good for the bazillions. I hope cancer is your only bodyguard. Jared Leto, unceasingly proving himself the pretty blonde from Fight Club, strummed his guitar at the party like any other citizen. Kid bro hath displayed a blatant disregard for getting past the first paragraph of Géza Csáth’s body of work. This D minus of a man is incapable, I’m imagining, of sitting still through half of Opium: Diary of Madwoman, the film he and his overpraised bimbo should have humped their dead pigs atop. I don't want to look at your life! If an actor's art is parasitically reliant on other art, a vessel shouldn't talk or the meal is sacrificed. Savage Garden, however, is not a performance; he’s a PR stunt. Is my old age the missing piece of the jigsaw puzzle that shall summon the coherency of this mandated digest of a runaway trailer? Look, someone had an extravaganza in their laundry! Swap Suicide Squad’s plot with Sausage Party and you’d have me in pajamas. All the foods fuck. I like that the foods fucked. How flipped are things that humanists are the ones who get to scoff now? H.L. Menken wouldn’t pick the internet up with a fucking handkerchief. I was privy to a headline calling The Night Of the darkest show on television in an inflection that in no way bemoans the overall lack of true bleakness across the medium, because the idea of bleakness doesn’t uphold the financial backing to mean anything other than what an audience craves. I don’t think freelance yuppie number a thousand was trying to be absurd, but what a nice, cordoned off giggle I experienced. If he meant the show is a smart procedural with well-crafted verisimilitude and naturalism aimed at exposing how monstrously dumb our court system has been and will always be, he must think he can fix it and purport how bleak it is that no one will let him, and fair enough, but am I too ancient in my bloodlust or does John Turturro, brilliant smasher of penguins, if anyone has a memory beyond search engines, end up smiling at a goddamn cat? The paramount newsflash the internet should be concerned about is how ruthlessly nothing on TV is willing to swing your stupid feline by its tail.