Stay With Me, Rock My World 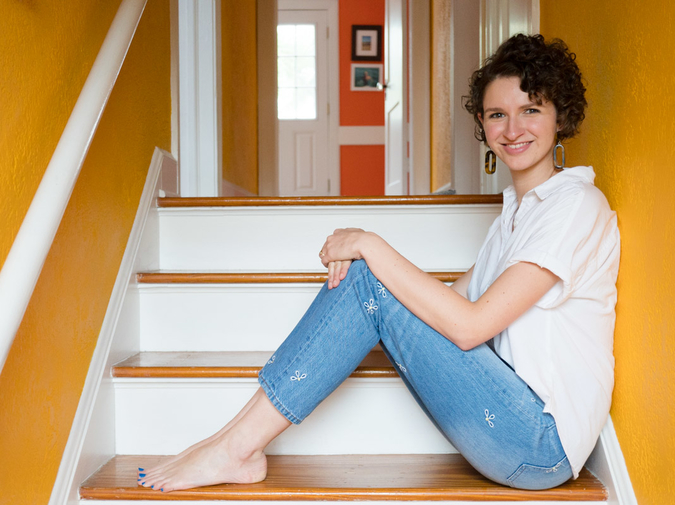 It took four dates for Alex to finally kiss me. Our pizza dinner led to a stroll on the beach beneath the stars, where he took my hand and pulled me up a lifeguard chair’s ladder. There, we talked and talked. I could feel us clicking.

We’d both grown up in Jacksonville, FL and stayed in town for college. We reminisced about our respective childhood visits to the very beach we were sitting on—the Harry Potter books I’d drag to the shore on summer breaks, the little brother he’d bury in the sand. Up in that lifeguard chair, Alex also told me about his diabetes.

He explained that he was diagnosed with an autoimmune disease as a child that alerted doctors to the potential for juvenile diabetes. He then took part in clinical trials at the University of Florida, where he and other at-risk children received insulin injections in hopes of prolonging, or even preventing, the disease’s onset. Alex received an official type 1 diagnosis when he was a preteen. “I wear an insulin pump,” he said, removing it from his pocket to show me.

The news didn’t phase me. And looking back, I wonder why it didn’t. Up in that lifeguard chair, my mind traveled to the only “experience” I’d had with diabetes—the VH1 dating show Rock of Love with Bret Michaels. The show aired the summer before I started eighth grade. Though I’d never heard of the Poison frontman, I still watched the show for its gratuitous soft core imagery, which my virginal eyeballs craved. Bret’s bandana-crowned head would be the only thing in focus amid blurred-out contestants, 21 women he only described as “hot” or “beautiful,” unleashing their boobs in his hot tub. But between these smutty scenes, Bret spoke openly about his struggle with type 1 diabetes.

I looked at the pump in Alex’s hand. It was small, like a beeper, with a clear cable that ran through his shorts and clipped to his skin. “Is that why you ordered a Diet Coke at Al’s Pizza?” I asked.

He laughed. “I like Diet Coke. But yeah, I started drinking it when I was younger to watch my blood sugar.”

I’d learned from Rock of Love that a diabetic’s rollercoaster blood sugar is a constant interruptor at best. On the season finale, Bret taught Jes—the winner of the show, and therefore, his heart—how to administer an insulin shot when his blood sugar spiked during a candlelit dinner. “This will save my life,” he said, showing her the needle. By the end, his contestants’ rankings clearly depended on much more than how “hot” or “beautiful” they were. “She protected me when I was sick,” he said on camera with tears in his eyes. “She’s my Rock of Love.”

In our moonlit lifeguard chair, I asked Alex, “Could you teach me how to use your insulin pump sometime?”

Moments later, he kissed me. It wasn’t the sloppy, smacking kind I’d craved watching Rock of Love. It was soft. Light. A kiss with staying power.

There’s a popular theory in psychology called the “hierarchy of needs,” coined by Abraham Maslow in 1943. Maslow dictates that one’s basic physiological needs must be met in order to pursue and attain life’s higher rungs—safety, love, belonging, esteem, and self-actualization.

It’s fascinating to me that, according to Maslow, a man like Bret Michaels who has everything on his side—fame, fortune, white male privilege—cannot attain love and belonging unless his physiological needs are in check. If his blood sugar is off, he can’t find his Rock of Love.

When Alex’s blood sugar gets too low, he slurs his words and stumbles, struggling to keep his eyes open. Too high and his body tenses, mood sways. Either way, he can’t think straight or speak in full sentences. It took time for me to distinguish Alex’s undulating blood sugar from general fatigue, stress, and anger.

The first time we slept together, he pulled away before we got started. “What’s the matter?” I asked, petrified that I’d done something wrong.

“Sorry.” He rolled over to turn the lamp back on. “I need to check my blood sugar.”

I sat up and watched Alex place a plastic strip in his glucose meter. He pricked a finger and released a drop of blood. Then, he grabbed his insulin pump from the nightstand and clipped it back in to the site on his abdomen, pushing a few buttons. “I’m gonna let it come down before we… do this.”

I smiled, but couldn’t help but feel a little cast aside. The sudden pause made me feel like less of a priority in the heat of the moment. I tried to rid myself of the thought—after all, his blood sugar levels were out of his control.

He leaned back and held his arm in an arc for me. I fit into his nook. He smelled like a day’s work, leftover Old Spice and all. We chatted while his blood sugar eased down, discussing weekend plans and restaurants to try and the movie we’d just watched together. When a quiet moment fell, I gazed at Alex, wondering if I’d taken spontaneity for granted.

We all expect sex to be an impulsive act. Passion leads us into sticky furies of undressing, wrapping into each other. Most of us don’t foresee our bodies being the ones to hold us apart. But in his hierarchy of needs, Maslow would say that spontaneity is a more elevated (and perhaps even more privileged) pursuit than regulated blood sugar. You can’t get to one without the other.

I’m sure Bret Michaels would agree. The same way his blood sugar levels interrupted romantic dinners on Rock of Love, I bet it’s stood in the way of his sex life, too. After spending time with Alex, it’s easy to picture Bret asking his production assistant for his glucose meter between topless hot tub scenes, or taking insulin backstage prior to slaying “Nothin’ but a Good Time” at Poison concerts.

Leaning against a pillow, I asked to see the pump site on Alex’s skin. He propped himself up on his elbows, bathing beneath soft lamplight. The site, attached just below his hip, resembled a suction cup. His skin was scab-speckled from moving it back and forth every few days.

“Can you shower with your pump?” I asked. “Will you be okay without it when we have sex?” I needed to know the rules before playing the game.

“I’m fine showering without it, as long as I’m not in there for hours. Same goes for sex,” he said. “Speaking of which.”

He leaned back over to his nightstand. Withdrew a test strip. Pricked a finger and let his blood drop.

I was 22 when Alex and I got married. Clutching my grocery store sunflower bouquet outside of city hall, I beamed at him.

Folks often ask why I got married so young. All things being equal, I would’ve been satisfied living in sin. But people living with diabetes anticipate emergencies, and their partners do the same. To this day, if Alex were unconscious while hospitalized, the blurry language of visitation rights can prevent anyone who isn’t “family” from entering a patient’s room. “Family,” meaning a child, parent, or spouse. Not girlfriend.

If marrying Alex was the only way to guarantee that I’d be by his side, I was all in. No questions asked.

“If you stay with me,” Bret Michaels asked his contestants as they passed into the next round, handing them a backstage pass as if it were a rose, “will you rock my world?”

I spot an insulin pump in the coffee shop. Clipped to a man’s belt, it’s the same one Alex has, the OneTouch Ping. The pump recently went out of warranty. Alex has been frantically researching new models so he can replace it before the end of the year. He’s been dreading the replacement—it means he’ll have to learn to rely on yet another pump. I want to ask the man if he’s managed to find a new one yet. What if he doesn’t know it’s out of warranty?

A new email lands in my inbox, plucking me out of my thoughts, and I’m back to work on a looming copywriting deadline. When I sip from my lukewarm mug minutes later, I see the man again. He’s at a table in the corner across from his teenage daughter—I can tell she’s his by her mirror-image nose, the exact dimpled chin. They split a quiche and chat. She’s fresh out of school, grabbing a snack and telling her dad about her day.

Rather than fully acknowledge the loveliness of the scene unfolding before me—quality time between a father and his daughter; quality time I’d love to see my someday-daughter share with her dad, my Alex—I instead consider the genetics of diabetes.

Unable to trace diabetes on either side, Alex’s diagnosis came out of left field. As his brother, Austen, grew up three years behind him, all their parents could do was hope Austen would dodge the bullet that struck their first son. Austen was luckier than his brother in this respect, breaking out of childhood and into adulthood without a diagnosis.

The father in the coffee shop lifts his pump from his belt. He pushes a button to take a few mid-quiche insulin units. A complex carbohydrate like tart crust, I know, acts slowly, causing blood sugar levels to rise much later than other carbs.

As a happily-married woman in my late twenties, I weigh the pros and cons of parenthood constantly. A big reason for me and Alex to refrain from having children would be to avoid potentially passing diabetes along. This man in the coffee shop must’ve been in the same position.

Alex used to call his father from school every day to report his blood sugar levels. His dad would keep track, jotting the levels down in a notebook. I wonder if he still has those little books of numbers somewhere—strings of 121s, 63s, 74s, 203s, advising his son to “take two units,” “eat a little snack.”

I could keep a notebook, I think, downing my coffee’s dregs. I could be that parent.

Bret Michaels has daughters. Two of them. I read in an interview once that his older daughter, Raine, exhibited diabetic symptoms when she was 10. Bret said she was afraid to take shots. Isn’t every kid?

I’m afraid of strapping a child with the burden of constantly monitoring their blood sugar. I’m afraid of passing along a disease that costs thousands of dollars a year to maintain, whether or not they have health insurance. I’m afraid of making someone feel like their body is unreliable.

When Bret Michaels’ daughter first showed diabetic symptoms, I bet he felt as prepared as he could be. A person living with diabetes—thriving in spite of it—is the best resource of them all.

It comforts me to know that Alex can be that resource. If we have a child who’s diagnosed, perhaps shots won’t be as scary when her dad has to take them, too. He’ll hold her finger steady when she tests her blood sugar. As the numbers appear on the meter’s screen, he’ll rub her back. “You’re so brave,” he’ll tell her. And he’ll mean it.

Hurley Winkler's work has appeared in The Millions and elsewhere. She is a graduate of Lesley University's MFA program and a 2020 recipient of the Community Foundation for Northeast Florida's Art Ventures grant. She lives in Neptune Beach, FL, where she is working on her first novel. Follow her on Twitter: @hurleywink.