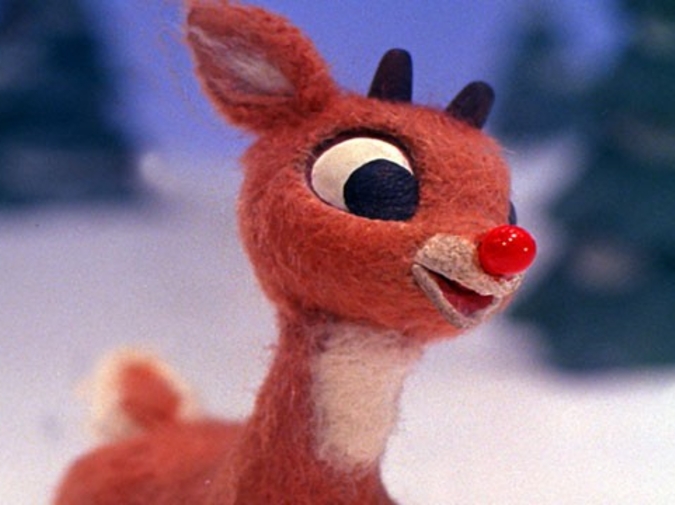 It only glows if I believe in God. Of course, the Fat Man doesn’t know that. Once an hour he comes into the barn waving his short black club, threatening to cut off my carrot supply. I sulk into the corner and cross my eyes. It’s down to a dull pink glow. He drools into his beard yelling at me. Christmas is only three days away, he says. Forecasts of fog, sleet, a great blizzard. I look up into his coal-colored eyes to see if there’s any understanding and his understanding cracks the soft part of my nose, ties a thick bow of blood around my mouth. I bury my head in the straw and he struts out of the barn cursing.

Only Prancer understands. We go on long walks under the aurora borealis to the far side of Mt. Jolly where the Fat Man can’t spy on us with his hi-tech listening equipment. I tell him everything.

“What about reading the Bible?” he asks.

Prancer pours us two glasses of eggnog, heavy on the Captain Morgan. We watch a polar bear become stranded from his family on a little island of ice, visibly shrinking in the unusually warm weather.

The world’s one big shit show and no one’s Watching.

The night before Christmas actually starts about 6 a.m. EST. Christian kids in Japan put Green Tea cookies in front of Tokyo TV sets and their parents put them to bed on tatami mats. The nose still isn’t glowing. If anything, it’s extinguished. Jet black with a white sliver reflecting North Pole moonlight.

I hear the Fat Man out there rigging the sleigh with Satanic bells. The other reindeer ask what the hell’s wrong with me. I say, I don’t know. I can’t force it to glow. They don’t believe me. They think this is insubordination. Civil disobedience due to my somewhat controversial stance re: Black Friday. But I swear to God I can’t help it. I swear to—

The door cracks open. The Fat Man’s in The Costume, his alcoholic nose cherrier than ever. A Cuban cigar juts from a yellow-toothed smile inside a bright white beard. He staggers across the straw with a 2/3rds empty bottle of Jose Cuervo knocking against his baggy red pants.

Prancer stands in front of me whistling Christmas carols. The rest of them huddle against the opposite side of the barn telling the Fat Man “hot” or “cold” as he moves closer.

I peak through a gap in Prancer’s antlers and see not the usual club but a long fishing knife.

The Fat Man notices Prancer has eight legs and burns him with his cigar. Prancer runs yipping into the darkness smelling of burnt hair. Then it’s just the two of us. The Fat Man and the Atheist nose.

“I’m not shitting around, Rudolph!” he says, waving the fishing knife with drunken flourish. “You glow or I’m cutting the fucker off. We got presents to deliver.”

I close my eyes and think of all the greedy little boys and girls out there wanting wanting wanting. I think of Africa, that vast continent of huts and elephants the Fat Man says we don’t have time to visit. I think of injustice. I think of capitalism. I open my eyes, look down at my nose and it’s just that – a nose.

“Is that your final answer?” asks the Fat Man.

I take a step back into the shadows. He takes a step forward, the cherry of his cigar beating slower than my heart, brighter. In it’s irregular throbbing I see his red face, eyes like black beads carved by the Devil to bejewel Robert Johnson’s guitar.

His fat backhand knocks me to the ground. A black boot pins my neck. I kick four legs stupidly into the air, escaping only my dignity. He leans over. His breath smells like Mrs. Claus’ goodnight kisses. From his little piggy grunts, I can tell he’s trying to decide if – sautéed with a little butter – my nose will taste more like shiitake mushroom or hearts of palm.

“You’ve always had to be different,” says the Fat Man. “Do things your way. Why not climb down the chimney of their banks and stuff money into their college accounts? Crowdfund green technology? Put copies of Walden into their goddamn stockings. I’m sick of it! You’d be nothing without me! You’re a flashlight with antlers. A laser pointer with hooves!”

At some point during the lecture the Fat Man’s half-burned cigar falls from his drooling mouth. When he notices the fire, it’s already spread across the barn floor. The smell of burning hay makes my eyes wince but it makes the Fat Man crazy. He starts dancing. He stomps in the fire singing a song that goes, “Oh God! Oh God! Oh God! My barn! My motherfucking barn!” It’s the most beautiful song I’ve ever heard.

When I’m able to stand, I notice that all the reindeer have run out the barn door. All but Prancer. His body points to the exit but his eyes hunt for me in the wall of orange flame.

New smells permeate. First, burning cotton. After a piercing scream, bacon. I’m surrounded by smells and fire. There’s no way out, but when I cross my eyes I’ve never seen anything like it.

Whether I finally believe and I’m full of His light or the Fat Man cut me and I’m dying through my face or my nose is the crucified hand of Jesus, I don’t know. But I know Christmas is going to be different this year. I know the sleigh will be empty. I see kids across America waking up to empty trees, the startled looks on their faces, nothing in their packages but air.

Children, I give you nothing for Christmas. When you’re older, remember me, Rudolph, burning in a barn at the top of the world, thinking of you.

Kevin Maloney is a fiction writer living in Portland, Oregon. His stories have appeared in PANK and Monkeybicycle, among others. Find more at kevinmaloney.net.