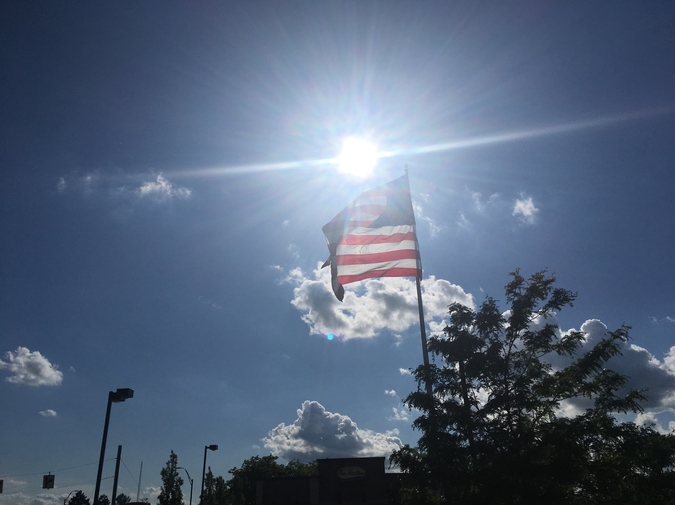 I have a superpower: Yo hablo Español. I use this superpower in my classroom when certain Latinx students don’t finish their homework.

“Stop NAGGING me,” they protest in our shared superpower. “And for the love of everything good, stop speaking in Spanish!”

“Why?” I nervously demand. “Is my accent that bad?”

I proudly follow in my mother’s tiny Mexican footsteps. She taught bilingual kindergarten at the elementary school I went to and her presence was usually enough to keep me in line. There was, however, the time I blew off writing a book report. Instead of dealing with me herself, my White teacher decided to outsource my punishment. She dialed Mom’s classroom, snitched, and then handed me the phone.

I gulped and lamented not having written a will.

When I arrived at the girl’s john, I found Mom empty-handed. <Gracias a dios> I thought to myself <at least she has no access to cucharas de palo here>.

Don’t judge Mom or think of her as a “violent Mexican” for that bathroom incident. Here’s why. When a Brown girl does well in school, she’s a credit to her race. When a Brown girl forgets her homework, White people point and whisper, “What do you expect? They are lazy, stupid wetbacks.” Mom’s harshness was meant to spare me from racist accusations.

By the way, my unfinished book report was a fluke. I usually did and enjoyed my homework and you could tell if I invited you over to hang out. While my White friends taped posters of unicorns and Luke Perry to their bedroom walls, I hung the movie poster for Stand and Deliver. That film tells the story of East LA high school teacher Jaime Escalante, a Bolivian immigrant who believes that Brown teenagers can learn calculus. With his bald spot, dad jokes, and emphasis on ganas, the desire to learn, Escalante reminded me of my father. Dad taught, too, practicing the liberatory pedagogy of Paolo Freire in bilingual classrooms.

In one scene, Escalante tells his class, “Did you know that neither the Greeks nor the Romans were capable of using the concept of zero? It was our ancestors, the Mayans, who first contemplated the zero. The absence of value…You burros have math in your blood.”

Math was my least favorite subject but this knowledge thrilled me. It validated my intellectual aspirations. I could claim my place within a lineage of Brown thinkers whose brilliance shone on this continent long before White people brought guns and measles.

Inspired by my parents, and Escalante’s story, I earned a teaching credential and went to work in Long Beach, California, a city once so White it was nicknamed “Iowa by the sea.” Those Midwestern days are now gone. Long Beach no longer smells like corn casserole, white bread, and Bengay. Instead, akara, arepas, chin chin, pho, birria, adobo, and fried catfish make our air scrumptious and the 2010 United States Census confirms what the nose knows: White people no longer make up Long Beach’s electoral majority. They account for 46.1% of our population. At 40.8%, Latinx people make up Long Beach’s largest racial “minority” and most of this Brown group shares Mexican heritage.

At school, I’m the only Latinx teacher in my building and during passing period, I stand at my classroom door, watching teenagers hurry up and down the hall. What I see brings to mind the work of Black intellectual W.E.B. Dubois. “The problem of the twentieth century,” Dubois wrote, “is the problem of the color line.” The way color and power circulate through American schools in 2019 shows that the problem Dubois identified remains far from solved.

Racism has always been integral to the American system of education and racism is why education is largely left up to state instead of federal government. These days, in California, there’s a unique Trumpian dread carried by students of color, Latinx students in particular. During the 2017-2018 school year, Long Beach Unified School District primarily served Latinx students. They represented 56.8% of those enrolled. Black students composed the second largest racial minority and we also served native Hawaiian, Pacific Islander, Filipino, and Asian students. Only 13% of those enrolled were White.

The day after his election, many Latinx kids stayed home from school out of fear. On campus, White kids yelled at Latinx kids that they were going to get deported. Students asked if I’d be willing to hide them in cabinets if state actors came looking for them. Trump created this atmosphere of terror. No child should feel that if they attend school they’ll be racially profiled and taken into state custody. If children do feel that, they’re experiencing terrorism.

I know of White male teachers working at my predominantly Latinx school who use their instructional time to praise Trump’s policies.

“Ms. Gurba,” one student recently told me, “Mr. So-and-so talks about how the president keeps doing great things and what a great leader he is. He tells us that Trump has done good things for us.” Shaking her head, she adds, “Ms. Gurba, we’re Latinos.”

A Black student seated nearby declared, “He’s not my President.”

My classroom is a safe space for political dissent but in some school spaces, it isn’t even safe to be Latinx.

Some years ago, when I ran a remedial education program at a high school in one of the Whitest parts of Long Beach, I was not given my own classroom. I was placed in a bungalow which I had to share with a White assistant principal who handled discipline. Most students, and a fair number of faculty and staff, didn’t respect this administrator. She took pleasure in cruelty, especially when it came to humiliating people of color and poor students. I witnessed her red-faced, yelling right in teenagers’ faces, spit flying, finger wagging an inch from their terrified cheeks. On a rainy day, I saw her point at a Latinx student and yell, “Give me your jacket!”

In a teasing voice, she said, “Your jacket violates the dress code. It’s the wrong color.”

The boy peeled off his jacket and handed it over. She crumpled it into a ball and walked away with it as if she was carrying a trophy.

One day, I was stuck in the bungalow with this administrator. She had a Latinx student who was classified as LEP, limited English proficient and the administrator was loudly and aggressively interrogating this student about an absence because SOMETIMES WHITE PEOPLE THINK THAT YELLING FACILITATES LANGUAGE ACQUISITION.

Finally, the administrator looked at me and barked, “Come here! You’re gonna translate!”

This commandment came in violation of federal law. According to the Department of Education, “Schools must provide translation or interpretation from appropriate and competent individuals and may not rely on or ask students, siblings, friends, or untrained school staff to translate or interpret for parents.” I may be bilingual but I’m not a trained translator.

However, I obeyed the order to translate because I lacked tenure and felt bullied by this administrator. I didn’t want to lose my job.

“Ask her who signed the note excusing her absence.”

I asked and then told the administrator, “Her godfather did.”

“That’s not a valid family member. Tell her that.”

I told the student that future notes would have to be signed by a legal guardian. I started to sweat.

“Ask her why she was absent.”

I asked but gave only part of her answer to the administrator: “She had a doctor’s appointment.”

“FOR WHAT?!” the administrator screamed.

I quietly answered, “A pregnancy test.”

The administrator got a slut-shaming look on her face.

“You tell this girl that she won’t amount to anything unless she keeps her legs closed!”

I thought of Mexican history, about the daughter of a Mayan chief, Malinal. Malinal’s superpower was that she spoke many indigenous languages and she was given as a slave to Hernan Cortez. He quickly discovered her political and linguistic brilliance and exploited these powers for his benefit. Some see Malinal as a traitor for having “worked” for Cortez. I, however, see Malinal’s mother as the traitor: she sold her daughter into slavery. No need for loyalty there.

I turned my back to the administrator and addressed the student, telling her, “We, at this high school, want to do everything we can to ensure your success, safety, and health. I promise you that that is our concern…”

The student relaxed at this news and took a deep breath.

The administrator leaned back in her chair, pleased that her opprobrium had worked.

Myriam Gurba is a writer, artist, and teacher. The New York Times has described her as having a “distinct and infectious voice.” O, the Oprah Magazine, hailed her most recent work, MEAN, as one of the “Best LGBTQ Books of All Time.” Her art work has been shown in galleries, museums, and community centers. She loves photography, strong espresso, and her mother’s laugh. Don’t ever tell her to be quiet.