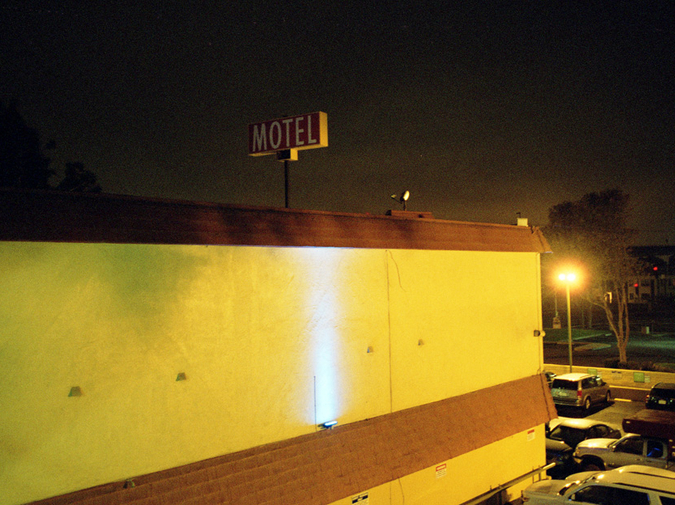 A few years ago. A couple months after my wife and I moved to Montréal. I'd fallen asleep on the couch.

My wife was working on the other side of the room. It was about midnight. She told me I jumped up in an instant.

'Where you goin,' she asked?

No shirt no shoes. Just a pair of old black jeans. I tore out of our apartment.

I walked down the wide concrete corridor. To the laundry room. I went in. The angles were all off. Twisting. Turning.  And the light came at me softer than normal.

With my back to the washer and dryer I started pissing down the wall.

The room was pulsing. I thought of lungs. Of heavy doses of poisonous mushrooms. I felt something there with me. I took a look over my shoulder. Jumped.

Got piss on my foot while trying to stop.

Crouching, with her feet flat on the top of the washing machine was a woman. Her arms hanging between her knees. She looked to be in her mid thirties. Long greasy hair. Pale skin.

'Shit,' I said, 'I didn't see you there.' I politely tucked my cock back in my underwear. Apologized. I even bowed while backing out of the room.

The woman said nothing. But I felt her eyes on me. From behind her hair.

When I got back in our apartment my wife asked me where the hell I went.

'Oh, I was pissing in the laundry room. But there was a woman sitting on the washing machine. I had to stop. '

She told me in the morning, when I woke up, that before she could ask 'what the fuck did you just say?' I was fast asleep.

And she was too scared to go check.

So we're still not sure if the woman was there or not.

But this is just an example. Of something that's been with me for longer.

The first time I found out I did this I was young. Maybe nine. Maybe less.

I dreamt that my uncle Smokey was at our house. He was furious. And it was all my fault.

He was coming for me.

In the dream I left my room, I knew he'd look for me there. So I went into the attic. Where all the years of my father’s and stepmother’s collected junk lived.

There was a terror I've never felt again running through me. Cold sweat poured off me. I was certain he was going to kill me.

His emotions were thick in the air.

I could here him smashing things. Yelling. Climbing the stairs to the second floor. Getting closer.

I trembled. I had to hide. I moved crates and boxes. Curled myself into a little ball behind them. Pulled a filthy old rug up over myself.

From the sounds of things. My uncle was in my bedroom now. The sounds of him furiously beating my mattress rang in my ears.

His growls of disappointment. When he found I wasn't there.

He footsteps stomped out of my room. He passed by the stairs to the attic. My sweat got colder.

And I held my breath.

But I heard him go down the stairs instead. The sound of the back door slamming shut. The engine of his van starting. His tires peeling out of the driveway.

In my dream I stayed where I was. Frightened to move. Until I fell asleep. Behind the boxes and under the rug.

When I woke up in the morning I was in my bed. I wiped the sleep from my eyes. But I could still feel the hatred of my uncle in my heart.

Since I was in my bed though, it all had to be a dream?

I got dressed and went downstairs. The kitchen was empty. I poured a bowl of cereal. Some milk. Sat down to eat. Read the back of the box.

My stepmother came in. Asked me what the hell I was doing last night.

Without looking up, I told her I was sleeping.

‘Well, it sure didn't sound like it,’ she said, ‘you were crashing around in the god damned attic. Woke me up.’

I couldn't say a thing. All the fear and cold sweat of the night before came back. My vision blurred. There was no more kitchen. Or questioning stepmother.

There was just the thought. That maybe it had been real.

Around the same time I picked up another bad habit. It started at my grandmother's place. I couldn't sleep. So I got up. Moved to a chair. The floor. Even the bathtub.

I was desperate that night. Because I didn’t know what the fuck was going on. I'd never been able to sleep in. An early riser since the beginning. But this, it was maddening.

Of course I chalked it up to the shitty pull out couch I was on. But it didn’t stop when I went home.

I brought the disease with me. And right on into adulthood.

These days. I never spend a full night in bed. Or keep to a regular sleeping schedule.

The next night, though. I'm in store for something completely different. Only one consistent variable.

And each time I get up. I come to violently. Eyes wide open. Knowing there's no hope of just rolling over. Pulling the blanket up. And going back to sleep.

So I leave the bed. I leave my wife. Sleeping. Soundly. While I drag my blankets behind me.

In the living room I throw my blankets on the couch. Sit beside them. My forehead in my palms. Staring between my legs at the floor.

Because I feel like everyone else out there knows the steps to some fabulous dance. And here I am. Leaning against the wall. Watching.

So I sit there in the dark for a while. Knowing that I have at least an hour before I can even try and close my eyes again.

I have to let the sleep call to me, I tell myself.

And after I've dismissed going into the kitchen to get whatever booze has been left lying around. Or rolling a joint.  I open a book. Or my computer. And try and read.

Until I feel sleep tap me on the shoulder. And my eyelids get a little heavier. Just enough to exploit into slumber.

And then the ritual begins. I lie down on the couch. Every blanket I have must be covering me in a perfect manner. All the weight of them evenly distributed. And enough room all around to cocoon myself.

After that, I have to wrap another blanket around my face.

There's no way I can fall asleep without it. Even in the summer humidity. If I think about it. It has to be some obsession. With the blanket I dragged around as a child.

Once I'm settled. And I'm lying there. Bodily functions at a bare minimum. My mind picks up the slack left.

I review all the conversations I've had during the day. And imagine all the ones I might have tomorrow. Looking for all the things I probably missed. And thinking of all the things I'll probably have to say.

There's never a recollection of this review period ending. I just shut down. Total darkness. Which feels like a blink. But when I check my phone. A couple hours of passed.

And I don't feel any more rested.

My wife and I both agree that something is fucking amiss. That’s for sure. So lately, we've talking about talking to a doctor. Maybe seeing if I can get into some kind of sleep clinic.

Which I'm not so sure about. Because all I can imagine is those scenes from A Nightmare On Elm Street. When Christie spends the night in one.

And I'm pretty sure she wakes up with slash marks on her nightie. Clutching the fedora of a mutilated child molester to her chest.

Which I just don’t think I'm strong enough for.