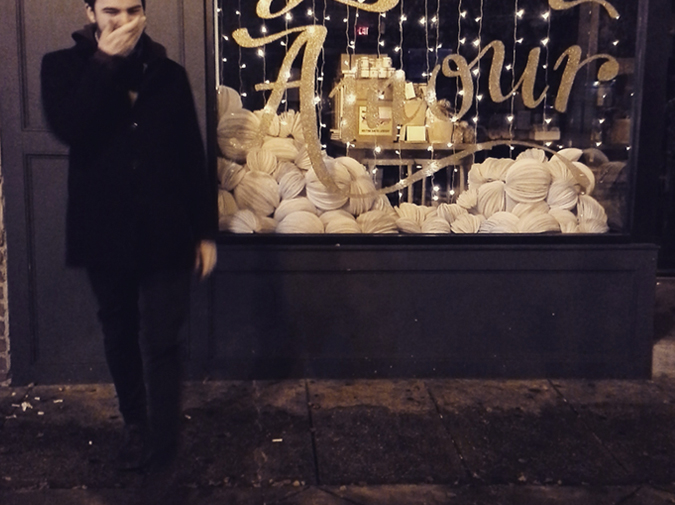 That summer was brutal in its heat, in his un-airconditioned apartment that housed us both when my house sprung a leak and filled like a fish tank, in the humid wall we walked through to go everywhere because we both wanted to drink more than usual, in the looming day on which he’d fly to a new job in another country, which neither one of us out loud called a breakup date.

That summer was lovely in neither of us teaching, in lying around naked, in bathing rice paper to wrap spring rolls, in daily using up his American coins at the ice cream shop across the pedestrian bridge that blended vanilla frozen yogurt with our choice of two fruits.

That summer held the moment, in real time and in my memory for several years, of something he said that I didn’t hear. He was arcing his body up toward the head of the bed as he said it. Half-defined in the dark. I was already settled on my pillow, a side-sleeper, only one ear to the world.

That summer he said something I didn’t hear seeped into a fall when I paid to expedite my passport renewal before he told me our half-planned visit wasn’t such a good idea after all; and then into a dirty midwestern winter everyone called mild with my arm in a cast that didn’t fit in my coat sleeve and chains of days when we talked on skype, late-night for him; and then into a spring when the dates of our new, actually-planned trip – a chunk of that next summer on a continent I’d never been to, his new city and others connected by a train in an underwater tunnel – didn’t arrive quickly enough. But in late April I didn’t hear from him for a week; but he emailed he’d met someone else; but I boarded my flight anyway and bloodied my feet walking alone from museum to museum and didn’t tell many people at home I wasn’t visiting him and didn’t take the underwater train and cried in the tiny European hotel shower.

That summer he’d said something that I didn’t hear, and I didn’t respond by asking him to repeat himself. I didn’t say anything to the grumbly sound coming out of the hot shadows.

For longer than I want to tell you, my brain became a possessed printer spitting out page after page of the possible things he had said.

Had he said, that night and at no other time before or after I dropped him off at the tiny airport in the departure lane because he insisted I not park and drove away past the wind turbines and stopped to buy deodorant of all things with my sunglasses on inside the store, I love you?

My memory can fill in the visual details if he’d leaned closer to repeat himself, even in the dark: where the stretches of his body that were covered in hair ebbed to shores of skin; the hank of hair that flopped across his face no matter how many times he pushed it back; the bottom lip the same shape as the stirrup of his jaw; the eyes that changed depending on the colors around him. My imagination can – has – conjured all the times his expression, leaving me, turned flippant and when, other times, I could see pain in the way the skin pulled over the bones of his face. My memory holds his voice, which always made my name sound alive with a new rhythm, but not those words.

That summer I didn’t call out into the darkness, what?

Rebecca Entel is the author of a novel, Fingerprints of Previous Owners, and of stories and essays in such journals as Guernica, Catapult, Joyland, Literary Hub, Electric Literature, and Cleaver. She teaches U.S. and Caribbean literature, creative writing, and the literature of social justice at Cornell College. You can find her on twitter @rebeccaentel and on instagram @rebeccaentel.