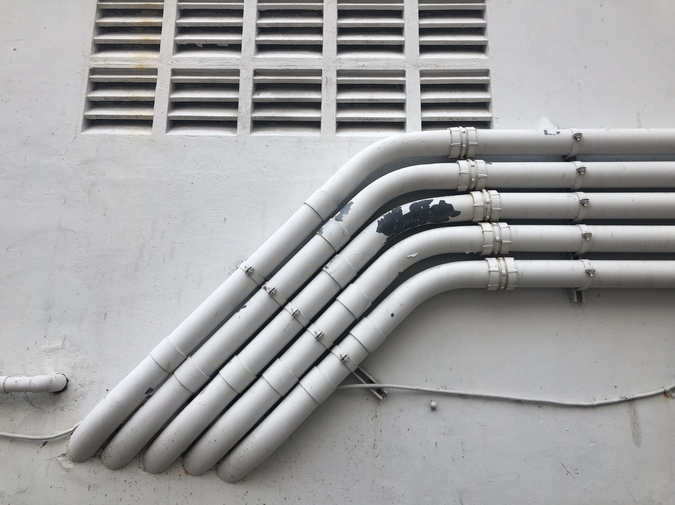 We noticed the smell even before we bought the house. At least, we noticed the masking aroma—a vanilla-scented plug-in device that did a decent job of overwhelming the dank, moldy odor seeming to seep into the master bedroom from the southern wall.

But my wife and I had toured about 10 different homes already, and in a tight Seattle housing market, even four years ago, we were willing to overlook this small stain. We’d found our home. A 1948, single-family brick house carved into Seattle’s Beacon Hill. The jagged peaks of the Cascades, punctuated by two crests the shape of cats’ ears, cut across the expansive view of the living room’s corner window. Original hardwood flooring lined almost the entire upstairs. Meanwhile, the downstairs had been converted from basement to master bedroom and lounge, complete with new tile and carpet. The home inspector declared it, “a diamond in the rough,” and aside from a few patchwork repairs, he said it was move-in ready. He mentioned nothing about the downstairs odor.

The problems with the drain started almost immediately. First, the dishwasher backed up. By design, there is a drain in the basement floor so that if the pipe running from our kitchen sink to underneath our downstairs tile is clogged with, say, egg shells, coffee grinds and vegetable bits, water will pool from the drain rather than putting stress on the 50-plus-year galvanized metal pipe.

That’s well and good, unless your bedroom is down there and you find sudsy water riding the mortar of the tile toward your wall-to-wall carpet. We called a plumber. He snaked the drain. Problem abated. Until a few months later when a similar thing happened—this time the clog was the result of a visitor placing a bundle of asparagus stalks into our purring, rather than roaring, garbage disposal. Another snake, another cleared drain. Until it wasn’t clear anymore. We grew accustomed to this routine, and the plumbing company grew to love us. They even applied the same $45-off coupon without collecting it, knowing we’d use it again soon.

Eventually, I acquired a 50-foot snake of my own. Sometimes it worked, sometimes it didn’t. The plumber’s number remained on our refrigerator. Once, I asked the plumber if there was a way to stick a camera inside the drain to see firsthand where the problem originated. He said our access point was too narrow for their basic scopes. He could do it, but it was going to cost us. My wife and I opted to keep snaking, to keep relying on scented oils and baking soda, and to keep living with the odor.

The blood clots arrived without any smell, and in fact, without much warning at all. At first, I thought indigestion lasting a week after eating a sub must be food poisoning. I saw a doctor for the first time in three years. Based on my symptoms, she diagnosed me with gastritis (inflammation in the gut) and prescribed Prilosec, which typically clears gastritis within a few days, if not a few hours.

She also suggested I visit the lab for bloodwork to get a more complete picture. I declined. I’m terrified of needles. Ever since my 30th birthday, a year and half ago, I’d been meaning to get more serious about monitoring my health. But I never actually did it. I told myself I was in good shape. I lift weights three times a week, I ride my bike, I chase my 1-year-old around the house and do squats with her like she’s a 20-pound giggling medicine ball. So even faced with this perfect opportunity—this pressing need, really—to take a closer look at my body’s innerworkings, I said no.

The doctor told me it was ultimately my decision. Besides, she seemed fairly confident in her gastritis diagnosis, and if the Prilosec didn’t make things better in a few days, I could always reassess.

That visit was on a Thursday morning in early December. By Saturday afternoon, pain had me in a ball on the couch. By late Saturday night, I was on my knees at the edge of our bed, asking my wife if I should go to the emergency room. I checked into the hospital at 3:39 a.m. on Sunday following an Uber ride spent dry-heaving out the back window, with the driver telling me, “Not to worry, man. It was probably just something you ate.”

At the emergency room, technicians immediately infused my system with an ultra-robust version of Prilosec that should have cleared the gastritis in minutes. The pain got worse. Technicians also drew my blood, and I had zero choice but to let them. The ER doctor ordered a CT scan, which revealed three blood clots. Another would eventually be discovered in my leg. The most pressing clot had already shut down all blood flow between my stomach and small intestine. Surgeons advised an emergency bowel resection to rescue whatever portion of my small intestine was still alive.

I spent nearly a week in the hospital, where I could focus only on the narrow cubby of the world into which I'd been wedged. I knew those blood tests days ago probably would have detected clotting. I could have avoided the surgery entirely, retained the more than 2-foot, charred-looking section of dead intestine that surgeons removed. For a week, I did almost nothing but think about this. Weeks after that, I was still sore where the knot from my gown pressed into my hospital bed.

All the while, doctors traipsed in, telling me my bloodwork came out clean for this test, spotless for that. They'd been able to treat the clots with blood thinners, but the cause remains a mystery. They've declared mine a zebra case: one for which a more common explanation likely exists, and yet it's defined by its own uniqueness, conceivable but not totally knowable. It’s frustrating not to have an answer, especially because I’m sure that the underlying issue is probably something that more frequent appraisals could have helped minimize. But at least the problem’s been fixed. At least I’m still here.

The day I came home from the hospital, the drain backed up again. The backlog was worse than ever. Instead of flowing from the floor drain, sewage and rainwater leaked along our bedroom wall, saturating the edge of our carpet with pungent dampness. We called the plumber again, and this time, I knew, the only option was to pay for the expensive scoping. No more band-aid fixes. No more simply pushing the clog farther down the line. No more masking problems with pleasant scents. No more avoiding the cracked and corroded truth.

It turns out, the concrete drain pipe that runs along our house and toward the city’s plumbing system had been damaged, probably has been for years. So every time we snaked from the inside, we simply pushed the sludge to the broken end of the pipe, where it absorbed into the mud edging our house. Eventually, of course, the water would drain somewhere—likely settling against our foundation, where the ground was constantly replenished with toilet flushes and dirty dish water.

The cause of the break? Unknown. But what does it matter? We can guess, just as doctors can guess that a recent long flight might have been the impetus for my blood clots, even though I don’t fit the profile of someone who should be affected. Sitting still can be tough on a body, just as the shifting earth, and plunging and thawing temperatures can be hard on a pipe. Neither concrete nor human plumbing always last half a century.

What matters was that the plumbers, once armed with information like the doctors, had a solution. Dig a hole, install a section of plastic piping to replace the busted stretch of concrete, and add an access point so that any future issues can be diagnosed from outside the house. It was an expensive, labor-intensive job, but it’s done now. Our water drains far away from our home, the moldy smell has faded.

My wife said I was remarkably Zen about all of this, particularly in light of the inopportune timing. But the way I see it, I’m no longer willing to let clogs and clots impede my life. Let’s fix them for good and move on. I need more flow. I need to have more fun every day. More childlike thrills, please. More bike rides and that feeling I get in my stomach when I drop into a perfect section of downhill. More time savoring the hearty roast of that coffee and the hearty laugh of the person I'm sharing it with. Hell, forget coffee. How about more hot chocolate? And top it with frothy marshmallows, would you? Give me more plunges into cold water, all of my blood rushing to the surface. More being there as my daughter explores the world and finds her own joys. What I need is to embrace my zebrahood, to gallop freely across the grasslands, wind bending at the shape of me, gliding seamlessly over my stripes.

Andrew Waite has an MFA in creative writing from Pacific University, a bachelor's degree in journalism from Boston University, and he currently works as an editor at Alaska Beyond, the inflight magazine for Alaska Airlines. He lives with his wife and one-year-old daughter on Seattle's Beacon Hill, where gravity and repaired pipes help the plumbing flow smoothly.