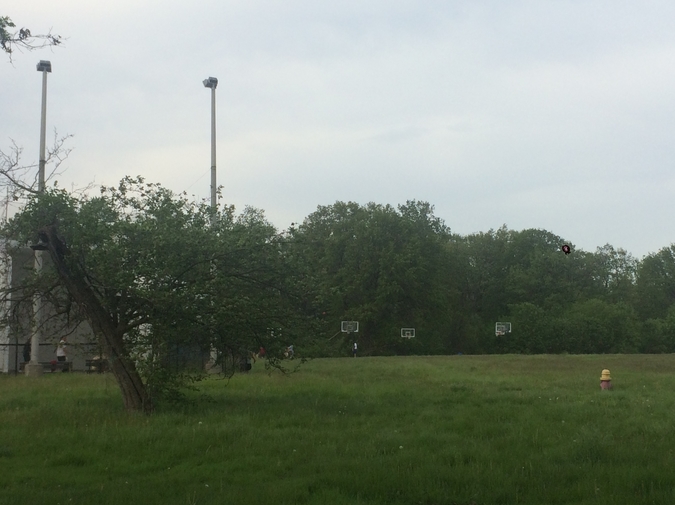 Outside my office window is a green dumpster. All four of the businesses in this building use it.

This is my everyday view, this little parking lot at the edge of an overgrown baseball diamond.

Throughout the day smokers step outside and prop open the building’s metal security door. They can’t see me. At least I don’t think they can. They never look at me.

I like to watch their awkward flirtations, their posing while they exhale. I like to watch the solo smokers puff away while thumbing their phones. The ending is always the same: cigarettes are mashed against the brick wall and flicked into the dumpster. The door slams.

I produce web copy for a Midwest chain of long-term care facilities. I used to write the copy. Now I supervise tech writers – three men, one woman – who handle the grunt work. I’m essentially the editor, the guy who puts a final stamp of approval on phrases such as “Your loved ones will enjoy 24-hour access to an exercise room featuring light barbells and state-of-the-art treadmills.”

We had a healthy debate about the term state-of-the-art as a descriptor for our treadmills.  We don’t want to make any promises we can’t keep, yet we need this world to sound idyllic, beyond reality. It’s a delicate balance between truth and other.

I smoked for twenty-five years. Recently I had to quit because my wife is pregnant. She’s younger than me by a couple of decades. People tend to think our age difference is scandalous until they meet her. Then they understand that she’s the sort of person who was forty by the time she turned twenty. Nothing titillating about it.

So now I’m going to be a dad. I can’t say it thrills me, the idea. Lately I’ve been reading our website and thinking, that sounds kind of nice. Sitting around on benches in a grassy area, shaded by oaks, tossing bread to pigeons. Playing checkers. I’d be the hot young man in the kennel, comparatively, surrounded by lonely old ladies. You could find worse ways to wind down your spin cycle, that’s for sure.

My wife’s mother is a resident in one of our homes. That’s how I met her. My wife, that is. She filed a lawsuit against our company for false advertising. She said our website implied we would provide vegetarian options at every dinner.

Her mom’s not even a vegetarian. But when my wife found out there weren’t always meat-less options, she litigated. The judge agreed that the language was misleading. He seemed annoyed, however, that the issue didn’t affect my wife personally. He didn’t award any damages. He ordered us to revise the web copy. My reputation was dinged.

But I couldn’t help falling in love with the lady with the giant glasses. During the hearing I became accustomed to gazing at her frowning face – so impassioned, so focused. My first wife lacked such qualities, or else she said I lacked them, I can’t remember. That was a while ago.

My mother-in-law loves the meatloaf at Valley Glen Estates.

The last couple weeks I’ve noticed a homeless guy. He seems to favor our dumpster. Spends ten minutes a day on his tiptoes, reaching in there, examining one piece of garbage at a time. He’ll pull up a crushed juice box and study it like an ancient relic before eventually tossing it back. What’s he searching for?

When the smokers come out he slinks away with his plastic bags of who-knows-what.

Our baby is a girl. I taped her ultrasound photo to the side of my computer. Everyone in the office gushes about it, about her. My wife told me to tape it up there. Personally, I’m uncomfortable that people are staring at my daughter in this, her most private of spaces. Like voyeurs. She has no idea she’s being photographed. How fair is that?

I really want to smoke.

I chew Orbit Bubblemint at every waking moment. Each paycheck is $100 lighter because of this gum. My jaw is like a gym rat’s thigh. I’m no good with metaphors, which is why I quit writing stories. I realize my deficiencies, most of them anyway, which people tell me is an admirable trait. I have my doubts.

The homeless guy is pawing around in the dumpster one morning. On the Internet the world is abuzz about how rotten some new comic book movie is. People are threatening violence over it. My baby daughter is one month from breathing air. The homeless guy’s beard looks like brown cotton candy. That’s a pretty spot-on metaphor.

I’ve never seen him actually keep anything from our dumpster. Today is no exception. He must get pleasure from foraging. I’ve read about people like that.

No one should become a new parent at my age. I’m old enough that I despise seeing photos of myself. I’ve kept myself in decent shape, and even still, it looks like I have breasts. Very small breasts, but god, it’s weird. Balding and breasted. Women don’t grow penises. Mustaches, I guess, some of them. Fair enough.

The writers I supervise call me sir. I never asked them to. They know I quit smoking so they don’t invite me to join them. In fact, they can’t stop congratulating me for quitting. I say, Really?

My boss tells me I should regulate their breaks. He says smokers get away with slacking off. I tell him they’re going to die soon. I’m kidding, he knows.

I let them smoke whenever they want.

Eight months into her pregnancy, my wife is nimbler than ever. I don’t get it. She’s doing yoga, contorting and squatting, bearing this huge protrusion that houses our daughter. She says it will relax the baby, and furthermore it will relax herself when she endures labor, which she intends to face without the help of pain-killing drugs. She’s way stronger than I’ve ever been. Some days I wonder if that’s a good thing.

One week before the due date, I bum a cigarette from one of my tech writers. A male one. Tech writer, that is. It feels unseemly to bum a smoke from a woman. It might be interpreted the wrong way. These are the sorts of considerations one has to make as a supervisor.

As I’m smoking I’m keenly aware of how rested my jaw feels. The deadly carcinogens are delicious mixed with the trace Bubblemint flavor.

I look beyond the parking lot at the baseball diamond; such a sad sight. Hairy with weeds. Littered with beer cans. The baselines are still visible, but barely. It’s tough to look at without imagining the way it was meant to be, full of life.

When I’m finished I squash the cigarette until there is no ember. I flick it into the dumpster.

Before heading back inside, I also drop the ultrasound photo in there.

Later, I’m going to watch the homeless guy paw through the garbage.

Darrin Doyle is the author of a story collection (The Dark Will End the Dark) and two novels (The Girl Who Ate Kalamazoo and Revenge of the Teacher's Pet: A Love Story).  His fiction has appeared recently in Spelk, The Offbeat, Summerset Review, Squawk Back, Passages North, and Word Riot.  He teaches at Central Michigan University.