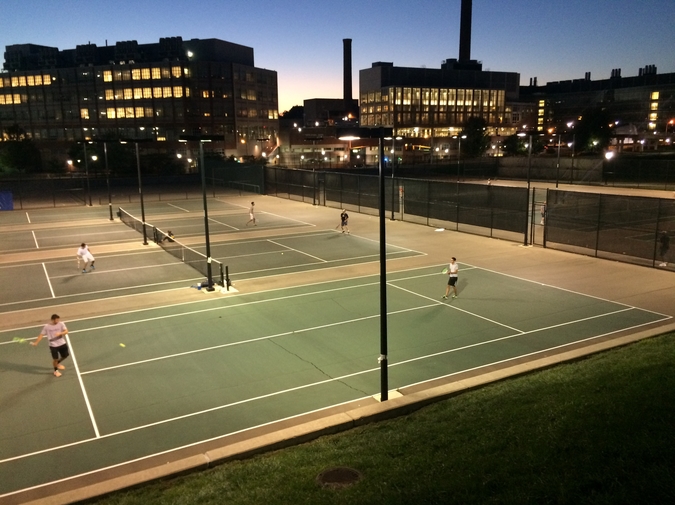 This is a true story insofar as I was on the street walking to get lunch and thought I’d heard someone call my name behind me. I had over an hour to kill before my next class and figured I could use the walk and could use lunch and by the end of both it might be time for class again. So much of life is deciding how to kill time so that it’s good and dead and doesn’t Lazarus its way back to haunt you later.

The story is entirely true, except it isn’t a story at all. It’s one triviality, walking to lunch and maybe hearing someone call my name, which could potentially trigger another triviality, another lunch date with the person who may’ve called out to me on the street.

Time has been manipulated to make it seem reasonably coherent. Time is always the problem with everything, but so are the people time makes a mess out of day-by-day, year-by-year.

I used to go home between classes but I moved recently and now going home isn’t an option. There isn’t time to go home, although I have gamed it out and maybe getting to spend twenty minutes at home is worth the hassle of finding parking, which often includes driving around the block once or twice and cutting down two different side-streets, but even then there’s often a five minute walk to my new apartment. So then I’d get to eat lunch and waste twenty glorious minutes, which isn’t enough time to get undressed but at least I wouldn’t be subjected to other people. But then after all that I’d have to drive back to campus and find parking there, which is the same drill without the side street Easter-egg hunt and so the upshot is fuck it all to hell.

That is if I didn’t leave enough time in the morning to take the subway or bus, which eliminates the parking problem but exacerbates the people problem.

I never take the subway or bus if I can help it.

This was all before Covid and quarantine. Now I stay home to teach and don’t have to park the car unless it’s to shuffle it from one side of the street to the other on Monday or Thursday depending on the side. You’d think this would be easy to remember, but I have the tickets to prove you wrong.

I always like going home best or I did when I used to leave the house. Almost anytime I left the house what I looked forward to most was returning. I used to find myself rushing home even if I didn’t have anything I needed to do once I arrived there. My pace would quicken to the point where I could feel the lactic acid building and burning in my legs.

I imagine all of this will become relevant again once I re-enter the world and I can’t decide if I’m looking forward to such a thing.

I’ve tried to become aware of this useless mindset and slow the hell down whenever I’m out on the streets. It only works sometimes.

These days I try to enjoy the walk home, if such a thing is possible, but it’s not from school anymore. The only time I leave the house is to shop for groceries or play tennis. If it’s too hot or cold the walk is never enjoyable. If it’s raining or snowing or there’s too much pollen in the air then it’s best to remain inside until order has been restored.

I remember reading once that lunch is a poor reflection on breakfast and an insult to dinner. This morning breakfast was yogurt and the crumbled detritus of an almost empty bag of granola. There was also half of a banana as the bananas I’ve been buying recently are freakishly oversized, so much so that I wonder what crimes have been committed against nature to achieve such a thing.

I didn’t turn around because I wasn’t entirely sure my name was being called and even so there was no one I wanted to talk to on the street in the middle of this particular Tuesday.

It’s a bonanza when there’s no pit, when the olive has been pitted. This saves time, though not much.

Later for dinner I would have pasta primavera, so I’m not sure which reflected what or who was insulted.

It turned out there was someone calling for me on the street because he hustled up behind me and called out my name again, asked if I’d heard him the first time.

There was no way to answer this honestly so I said something like, I wasn’t sure if someone called out Robert or said something that sounded like Robert.

Once I passed someone on the street and heard this person say my full name out loud into his cellphone. At first I thought it was a student I didn’t recognize, but the person’s head was down and thus couldn’t have noticed me coming from the other direction. This was a different Robert Lopez he was referring to, most likely the songwriter who has won Oscars and Tonys or perhaps it was El Vez, the Mexican Elvis impersonator, whose big hit is You Ain’t Nothin’ But A Chihuahua.

I probably hate both of them, but it’s my own fault having such a common name.

It was strange to hear my full name called out loud and somewhat disconcerting. I had half a mind to stop this person on the street, show him my driver’s license, and keep moving. I wouldn’t have said a word and it would’ve been excellent.

The person who called out to me when I was walking to lunch is a colleague and also between classes.  He teaches fiction writing and film, is handsome and stylish, smart and funny. We’ve played tennis together, so we share something like a bond. He’s one of the very few players who hit two-fisted on both forehand and backhand. His groundstrokes are consistent and he hits with pace and heavy topspin.

It’s the following week and no one has emailed anyone about lunch or anything else.

The truth is I would like to have lunch with my friend and colleague and I’m going to make it a point to email him to reschedule. I’m sure he also wants to have lunch with me but we’ve fallen into a habit of saying let’s get together for a drink or for a hit and that one of us is dying to play and it’d be great to catch up but then time has a way of collecting at the bottom of an almost empty bag of granola, untouched and ignored and finally thrown away.

Now, though, it’s months later. Since we made this plan there’s been a pandemic and the subsequent lockdown and quarantine and a long overdue uprising that seems to be affecting some real change across the country.

Everything is different, including how we make plans and how we experience time. I haven’t made a plan with anyone since early March, other than to play tennis, but not with my friend and colleague.

I still rush home and in the early days of quarantine, this was understandable, encouraged even.

Outside everyone was a terrorist, everyone a biological hazard.

I’ve threatened to make a backyard plan with another friend, drinks but probably not food and maybe even BYOB, but like so many plans to make plans, no actual dates have been suggested.

My colleague and I have been in touch since the pandemic and the quarantining, about specific school business, but not since George Floyd was lynched and the country finally said with (almost) one voice, enough.

I’m sure we’d talk about how one of us is a black man and the other Latino and how our mostly white students are on the right side of all this and thank god for that. So many of them taking to the streets and protesting, so many posting on social media every day. We’ll talk about how great they are, while pointing out what’s troubling about the institution’s student population and the obvious dearth of black and Latino students.

Maybe it’s because we teach at an Arts school and only rich white kids are either interested or can afford to be interested in such follies. Maybe spending four years and hundreds of thousands of dollars studying negative space and character development isn’t a good idea.

Maybe it’s good that young black and brown people are at other colleges studying other disciplines. Maybe they’ll make money someday and get to exploit other people because this is America and making money and exploiting other people is why we go to school in the first place.

Maybe money is the only path to change, either as individuals or as a society.

We won’t have any answers because there aren’t any, but it’ll feel good to hear each other talk about this.

We’d talk about time and how it moves.

We’d talk about what we’ve been up to, our experience with the quarantining. How at first it was entirely unsettling, like hearing someone call out your full name on the street while talking on a cellphone, but then we got used to it. How we weren’t able to concentrate on anything at first and had to watch disaster movies and reruns of bad 70s television as a relief to the constant barrage of bad news.

Maybe we’d both say that after a while it wasn’t that bad and maybe this means that people can get used to anything. Maybe it means that a lot of us were already waiting for the world to end and it turned out to be as boring as everything else.

The trouble with the end of the world is what to do the day after.

The trouble is I like eating meals alone. In this way I’m a little like my grandfather, who I assume enjoyed eating alone because he always had to when my family and I left him alone at the table. All of us were finished and scattered about the apartment and he was only getting started. I’ve never seen anyone eat slower or seem to enjoy food more.

I always eat too fast, but I always do enjoy it. Sometimes I read a book while I eat and sometimes I concentrate solely on the eating.

I’m certain my friend and colleague also enjoys eating alone, although I have no idea if he likes to read at the same time or what he might concentrate on.

I sometimes think about changing my grip on the forehand and my grandfather’s arroz con chuletas and whatever triviality occupies me on a given day.

But I always think about going home and how I can kill the rest of the day once I get there.

Robert Lopez is the author of three novels, Part of the World, Kamby Bolongo Mean River —named one of 25 important books of the decade by HTML Giant, All Back Full, and two story collections, Asunder and Good People. A new book, A Better Class Of People, will be published by Dzanc Books in 2022. He teaches at Stony Brook University and lives in Brooklyn.