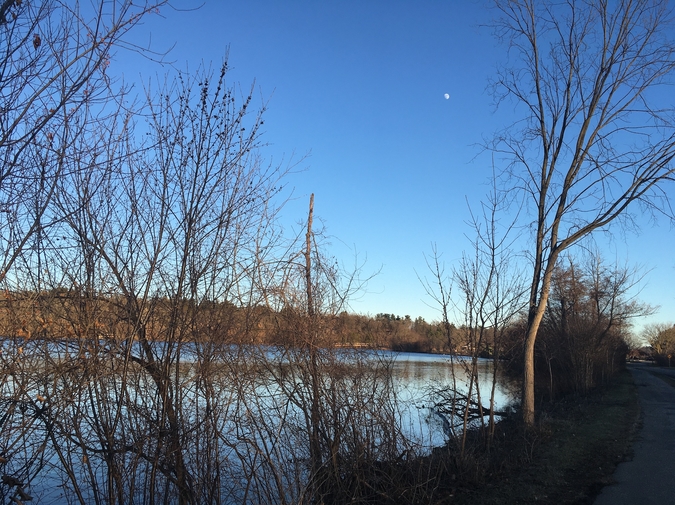 I can't think about my daddy without thinking about fishing. He loved fishing. He'd take me and my brothers out to this huge blue lake in the North Alabama mountains. Ancient pines grew all around it, shaking their scent into the breeze.

We'd stand on the shore and my feet would sink two inches into the dark black mud, and we'd put little red beads on the fishing line, right above the hook because it looked like salmon roe. Daddy had heard somewhere that doing that would catch you a big one.

Most of the time we only pulled in little trash fish. Bony fan-bodied things that shook the water off their tails like a happy dog. But one time we finally found the perfect spot. We spent all day throwing those little red beads off the shoreline, and we pulled in six huge rainbow trout that had probably been stocked there from some hatchery in Tennessee. Boy were they beautiful. Streaks of pastel pink running down their sides, covered in little black specks; constellations shimmering in an iridescent pine-green sky.

We put them in an igloo cooler we kept in the truck along with some lakewater to keep them fresh, and they kept knocking on the plastic sides of it the whole way home. The knot in my stomach grew bigger and bigger as I thought about how we'd lay them on the plywood workbench in the garage and hack their heads clean off.

We had this spring-fed pond that backed up to our property. I used to go poking around some blackberry bushes that grew there looking for buried treasure. One time I found an old rusted out pot and a plastic spatula. When my daddy went in to put the fishing junk away and get the workbench ready for the slaughter, I hauled that igloo cooler down to that pond and dumped everything right in.

By the time I got back to the truck with the empty cooler daddy was already yelling for me. When I told him what I'd done I saw lightning flash across his face.

"Six fine fish in that dirty pond! They're gonna die there anyway!" he told me. "They're gonna suffocate on all that mud." And I believed him. He slammed the trailer door so hard it cracked the linoleum around the threshold.

I rode into town with daddy shortly after the cooler thing. We had to pick up mineral blocks for the cows since winter was coming on. I sat in the truck holding my breath, trying to imagine what suffocation was like  when I heard daddy talking to his buddies about me.

He was full of fire and disappointment. They all looked at me like I wasn’t right; hands on their heads, squinting real hard like they couldn’t believe their eyes. I stopped going into town with daddy after that.

He never took me fishing again. When he and my brothers would go out to the lake I'd go down to the pond and eat those blackberries and talk to my rainbows.

I started high school the next year and tried out for the football team, but I was only 110 pounds and all them big boys ran over me like I was made of paper. I lasted two weeks and then I gave daddy the form to sign that said I was quitting. He wrote his name in the empty block without even looking up at me. I turned in my helmet and my shoulder pads and the coach told me “quitters don’t get nowhere in life” like he was doing me a favor.

When it came time to pick a college I chose the one that was as far away from home as I could imagine. I’d dream about the big city tucked into the mountains, and the bridges, and the steel like I dreamed of those rainbows.

I expected the big city to be salvation but it turned out to be hellfire with more traffic. I spent six years reading novels that were supposed to mean something and got two degrees that said I could write a story.  Nobody there cared about the fact that I was a wimp, but they all wanted to tell me what my voice should be. Apparently, if you say y’all or  ain’t as a modern American writer then you’re expected to write a lot about small towns dying or people dying or relationships dying and live-oak trees and spanish moss.

I got a gig managing a grocery store produce section that I had worked in since sophomore year of college. I stopped calling daddy every week because I got tired of him telling me I’m gonna die without Jesus.  I traded in my pearl snap shirts for polos and white sneakers that squeak on the tile.  I wrote my stories in the little laminate wood office where I sign for oranges every week.

This morning I went back to the old place for the first time in a decade. I saw the white headstone and the big block letters that read "Floyd Moore Jr. 1958-2019". I saw the engraving of a fishing pole and basket.

Daddy had died of a heart attack a month ago. My older brother told me in an email. He sprawled out on the kitchen tile and that was it. They had his funeral at the baptist church and they buried him next to a cypress tree with knees that reached right out into that murky pondwater.

I sat down by the pond and ran my hands across the surface like I used to when I was a kid. Right before I went to leave I caught sight of one black eye staring up at me from under the water and this great speckled fish turned to show me the streaks of pink running down its side before lighting out for cooler water.

Steve Comstock was born and raised in Baldwin County, Alabama. He served in Afghanistan with the U.S. Army and now works as a diesel mechanic in Pittsburgh, Pennsylvania.