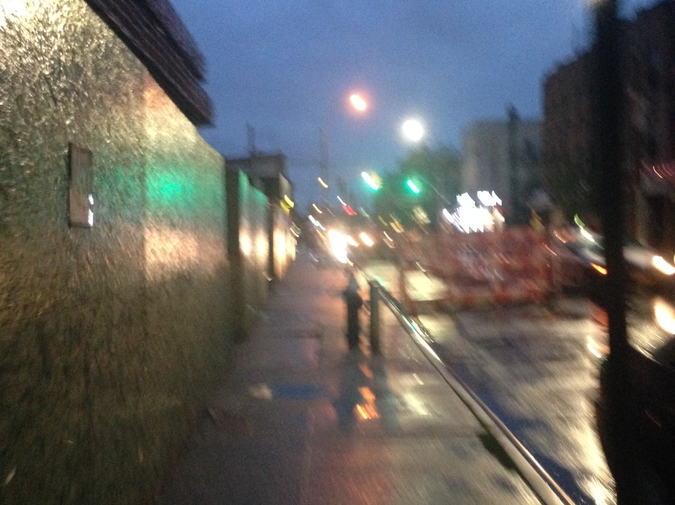 He suggested we go to the rooftop where it was quiet, and I said yes, though I knew he didn’t really want to talk with me. I knew what he wanted. That hadn’t changed. Then and now he wanted go to a place we could fuck, though he never said the words, let’s go fuck, much less, I want to fuck you. He was obvious but never forthright, which is why I couldn’t blame him afterwards, for misleading me, or for disappearing.

Hollywood Hills. A panoramic view of the city, lit up for night. We stood before a parapet so low any fall would have been deemed an accident, though he wasn’t thinking about that, all this time and he still hadn’t learned to be afraid of women. He was smiling expectantly. What has it been, sixteen years since college? he said. You haven’t aged a day. This was a lie, though it was true I looked younger than he, he’d kept his hair but he was fleshier now, with a paunch. He was a VP at a tire company in St. Louis. He was in town visiting a former colleague, whose brother was a partner at my firm and the host of this party. So you’re a big-time lawyer now. Do you like it? I always knew you were smart.

He inched closer. Our elbows kissed. A swift shove and it would be over — or would it? He’d fall two tall stories then the hill’s cliff-like drop, but maybe in the dark below was a soft tree. People had survived stranger things. The world was designed to protect men like him. Then I would really be the crazy one, vindictive, pathetic.

Downtown. Century City. Santa Monica. He pointed these out to me from left to right like a knowing guide, though I was the one who’d been living in Los Angeles for sixteen years. He’d looked uncomfortable when I’d first spotted him that night, the only person at the party sweating it out in a corporate suit and tie. Now that he had me alone he was more self-assured, back to acting the big guy on the small campus, president of the frat house that the pretty girls went to. He and his roommates had the corner room with the shot dispenser mounted on the wall.

The sky was starless, only an occasional plane streaking across then disappearing, disappearing. I held my glass of sangiovese over the edge of the roof, considering a test drop. Hold that, he said. He took a picture of the glass against the city lights, then me against the city lights. Then that smile again. I can’t believe it, he said, shaking his head. What are the chances, I haven’t seen you since graduation. This wasn’t true, I hadn’t gone to my graduation, let alone his two years before mine. Wasn’t that a great day? Without prompting he told me about his life since: five years at a business consulting firm in Chicago, then stints at Panasonic and RCA, then the tire company made him an offer he couldn’t refuse. He didn’t mention Elise, the girl he’d had an off-and-on thing with his senior year, she’d dropped out as a sophomore to follow him to Chicago and somehow, eventually, got him to marry her. They were divorced now, I assumed, his hands looked like they’d been ringless for a while.

The night I’d first met him, I’d just turned eighteen. His room was crowded but he’d homed in on me right away, took my beer and poured me a Jim Beam and Coke, found space for us on a couch, his easy arm around my shoulders, asked how I liked college so far. In the dim room I glowed under his attention, I felt pretty, until Deb whispered in my ear: You don’t know him like I do, he always does this, he’s hooked up with so many girls, trust me, I know, let’s go to the next party. I left him that night but not long after he invited me back, and Deb wasn’t there.

The crazy girls are the ones that won’t disappear. Even after you start ignoring them they keep returning to your room, pretending it’s all cool, you’re friends now. They are too easy. They are too angry. They drink your Beam then whisper shitty things about you to the new girl. They shoot daggers at you all night then tell you they love Elise, Elise is so cool, they say. They make her get up and dance with them to Dave Matthews Band. They won’t leave and won’t leave and won’t leave until one night finally they get you alone, then they let you take their clothes off and start crying, they yell at you when you say maybe it’s time to go home. They leave their earrings in your sheets and then call when Elise is over to ask if you’ve seen them, you say no and hide them under the mattress. They’re too sloppy. They’re too messy. They’re too much on a hair trigger, you never know what you’ll get from them, everything you want and too much more besides, even after sixteen years they’re wearing a fuck me dress and eyeing you on a rooftop, quiet and ready and thinking god knows what.

Siel Ju writes the newsletter Love notes from Siel and is the author of Cake Time, winner of the Red Hen Press Fiction Manuscript Award. Her stories appear in ZYZZYVA, The Southern Review, Confrontation, and other places.