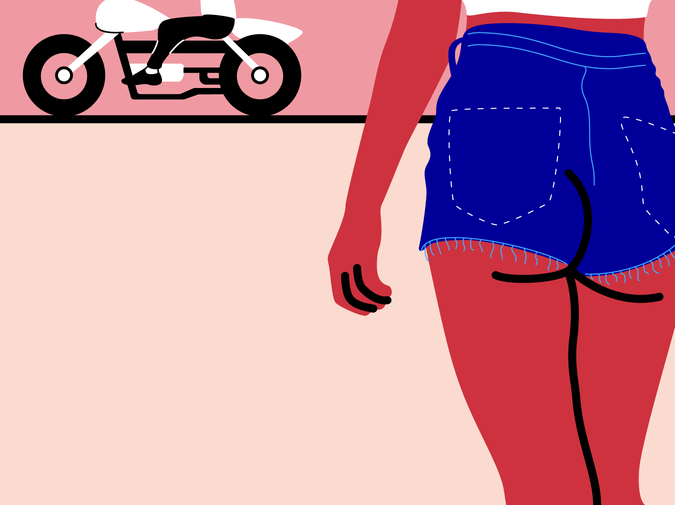 The man who came out of the bathroom at the Quikstop was tan, hair down to his shoulders, a smile that was lazy and wide. I was seventeen, so he was a man — had I been older, maybe not.

He looked at my eyes. He smelled like red wine and olives.

“Hey,” I said, really low key. He shook his head, like in disbelief. “Oh man, look at you.” I felt thin and cute and hot. He looked at me, up and down. I wish I could look at me, but there was no mirror. I knew that my shorts were tight around my pelvis and up my butt.

“Give it your all in there,” he said, and then he was gone. I locked myself in the bathroom, one with toilet paper streaming from the overflowing garbage, and now, I wanted to have sex. But I had to pee, so I did that instead, and I gave it my all, per his request. I squeezed my pee out with force, a powerful stream of gold. You’d think I was an Olympic fountain.

I returned to my boyfriend waiting in his Mustang. The Mustang was brown and smelled like Burger King, like dust on fabric. My hands smelled like the cotton flowers of the rest stop bathroom’s soap. I handed Jack a bag of Bugles.

“No pizza flavor? Man,” he said. He opened the bag and the fried chip smell made sense with the BK and the dust. We were making our way back from Wildwood, taking the Garden State Parkway all the way up. It was July, and I was going through a very interesting phase where, for the first time ever, I liked myself. I liked my thoughts, the shirt-and-shorts combinations I wore, the way they looked on my body, my sense of humor. And I was feeling woozy from the weekend with Jack. We’d drunk and smoked at old men bars for three nights straight, morning after morning and into the next, until today’s morning, when we’d woken up sweaty in the bed. The cooling system had died overnight. I thought it was inferno. We called it our honeymoon, but it wasn’t, in all honesty. This was the honeymoon. This man.

Jack was fidgeting with his sandal with one hand and eating Bugels with the other. The car idling in its parking space.

“Hold on. I think I know that man,” I said, catching a glimpse of my honeymoon filling up his motorcycle, at another pump. His motorcycle was red.

“Excuse me,” I said. I hopped out of Jack’s Mustang and slammed the door too hard. I walked towards the man in my flip flops. I made sure each step slightly crossed the other, so my hips swayed and my butt squeezed. I pretended my legs were giraffe long.

“Now it’s my turn,” I said softly when I reached him. “What’s up?” He looked amused and surprised. I took my sunglasses off so he could see my eyes. I could see his, and how they twinkled in the hot heat. Maybe if our pupils connected on one same line of sight, the gas station would blow up, magically.

“Why don’t you come with me?” the man said, flat out. He patted his motorcycle like it was his horse. It had leather seats. His hand was big and well-manicured and I watched it reach for the gas hose. With purpose, his hand finessed the hose off the kiosk and directly into a metal-rimmed hole, a fuel tank. The sight was too much for me.

“To where?” I only came up to his biceps, if that.

“Where do you need to go versus where are you going?” he asked.

“Up north. But my boyfriend’s here.”

“Your boyfriend’s where?” the man said. He outstretched his big arm, flung it around the circumference of his body once, twice. I wanted to jump up and grab onto it, like it was a branch on an oak tree, and swing, and stretch. I wanted to let all the pressure in my body fall to the spot between my legs.

I swiveled around on my feet, heels up, doing the giraffe walk again. I twitched my ass and popped my legs because I swore I could feel his stare boring holes in the buns of my shorts. Get a look now, I was saying to him in my head. Get a good look now, get a better look later.

I had dreams of diving across a valley on the back of that bike. Of landing in flowers, or in a bayou. Of love through the metal hole.

I got back to the Mustang and Jack wiped his Bugle hands by ruffling my hair. He joked, “Is that your uncle?”

That man put me in a chute, one I’ll hurl down forever, when he merged onto the highway and rode away.

Christina Drill's short fiction has been published in The Florida Review and Chicago Quarterly Review, and is forthcoming in Blue Earth Review. Her non-fiction has been published in The Adroit Journal, The Miami Rail, and New York Magazine. She is currently an MFA candidate in fiction at the University of Miami, working on a collection of stories and a novel. She grew up in New Jersey.