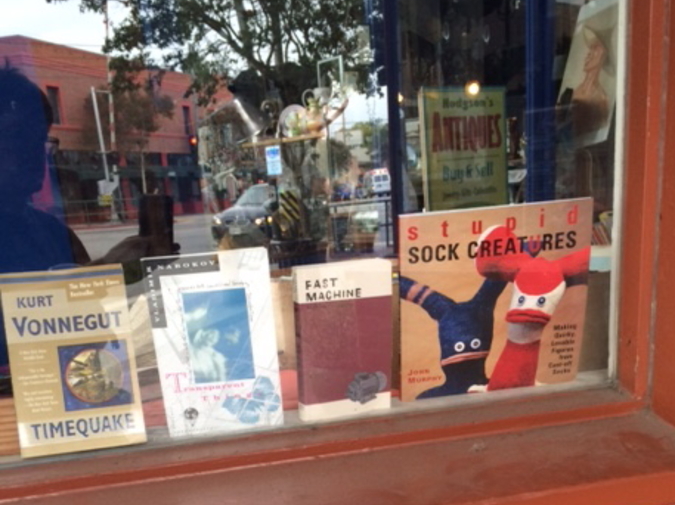 I was visiting an old friend at her parents’ house.
I had brought with me an iced coffee.
It was summer and humid and I wasn’t drinking alcohol.
When I finished the iced coffee I rinsed the plastic cup in the sink.
I couldn’t remember where the garbage can was located.
I asked my friend for help locating the garbage can.
She pointed to a location beside the fridge and I walked over.
I used my foot to open the lid like I’d seen people do on TV and in the movies.
I was about to drop the plastic cup into the garbage can when my friend took it from my hand.
“They’ll want to recycle that,” she said, meaning her parents.
She took the plastic cup somewhere I couldn’t see and when she returned we didn’t discuss it further.
“Who wants to play Go Fish,” my friend said. And I said I did. Because I’d brought the deck of cards that said Go Fish on the outside.
My friend and I sat cross-legged on the floor and oh yeah my friend has two daughters who sat on the floor with us.
We’re not psychopaths.
We were playing Go Fish with two small girls.

On the drive home I had time to think about the plastic cup.
I imagined a scenario in which I asked for it back.
“Just, you know, I brought it here and I thought I’d take it with me,” I imagined myself saying.
“You don’t want my parents to recycle it?” I imagined my friend asking.
I imagined my friend’s parents, who would be home from their golf game by now, looking up over the tops of their newspaper at me.
Maybe I was a psychopath, was what they were intimating.
“I don’t know,” I would say. “I just…I thought I’d make that decision later – to recycle or not – at home, after I’ve thought about it a while.”
I wouldn’t mention feeling offended earlier when my original choice had been overturned.


Today (like, five minutes ago) I was masturbating on my bed with a hairbrush and thinking about volunteering later today at the therapeutic equestrian center where I volunteer on Mondays and sometimes Tuesdays. I was thinking about writing this story I have wanted to write for a while now, which is a story about Gerald, a rider at the therapeutic equestrian center where I volunteer. Gerald is nineteen or twenty or maybe he is twenty-one now, I’m not sure. Gerald has Down syndrome and you aren’t supposed to ‘talk down to’ or ‘baby talk’ him or anyone else who rides but inevitably people do. Gerald’s mother also volunteers at the therapeutic equestrian center and one day I was walking on one side of a horse while she was walking on the other and she was telling us (the horse leader and me) about a day recently in which she discovered Gerald had created a Facebook account for himself. “There were quite a few less than desirable people he had friended on there,” she said. “I defriended them and explained to Gerald…and now I keep an eye on his account.” I wondered what she meant by ‘less than desirable people.” I thought she could mean someone like me. Or me, even. (But very quickly I remembered I’m not on Facebook so I guess it wasn’t me.) Later, during one of our break periods between riders, I was sitting with Gerald and a couple other volunteers. Gerald’s mother wasn’t in the break room with us. She was in the barn putting away a horse or talking to another horse leader. Gerald was drinking a juice box and one of the other volunteers, a young woman in high school, said, “Gerald, what flavor is your juice box?” and Gerald said, “Apple!” and the young woman in high school said, “That sounds yummy,” and Gerald said, “Yes, it’s very yummy,” in a way that sort of ran all of the syllables of all of the words together in one robotic sound. I thought about how we had been told not to talk down to or baby talk the riders but I didn’t say anything. I never said anything in the break room (or to Gerald) other than “hey” or “it sure is hot/cold/raining.” Another volunteer, a middle aged woman with hip problems, came in from outside and said, “Hey, there’s a double rainbow!” and we all got up from the plastic chairs and went to the windows to look at the double rainbow. Gerald came too. Someone had called Gerald over. The young woman in high school, maybe. We all stepped back and encouraged Gerald to look out the window. “See the double rainbow?” we said. “Yeah!” Gerald said. One of us traced an outline for each rainbow on the window in front of Gerald to make sure he saw. Then we sat back down in the plastic chairs. One of us went outside to get a better picture of the double rainbow on our phone. Gerald’s mother came into the break room from the back. She said, “So-and-so said there’s a double rainbow. Gerald, did you see the double rainbow?” “Yeah!” Gerald said. Then the rest of us echoed him. “Yeah,” we said. “We showed Gerald the double rainbow.” But Gerald’s mother seemed like she wasn’t listening. Or Gerald’s mother wanted to show Gerald herself. She held open the door for Gerald. “Come on out and see the double rainbow, Gerald,” she said. We watched as she took Gerald outside and traced the rainbows in front of Gerald as we had already done five minutes earlier. “You see them?” she said.  “Yeah!” Gerald said. I watched, wondering again about the ‘less than desirable people’ Gerald had followed on Facebook. I imagined the less than desirable people were female porn stars. I wondered if Gerald had ever watched a porn or masturbated. I wondered if “not talking down to’ or ‘talking baby talk’ to Gerald included allowing him to be a pervert like the rest of us. I thought of all this with the hairbrush inside me. Now I am typing this up. In a few minutes I will take a bath so I don’t smell like my sex before I go to the therapeutic equestrian facility where I will see Gerald. I will say, “ Hey!”


I hadn’t had any alcohol to drink in forty-two days.
I had told myself I wouldn’t drink for thirty but once you stop doing something it’s hard to start doing it again.
A week earlier I had told my friends I would drink wine with them.
Then when the time came to drink wine I couldn’t bring myself to drink it.
I kept filling their glasses hoping they wouldn’t notice.
I made myself a cup of licorice tea after they left and drank it by myself in the basement.
I was procrastinating my return to drinking a while longer.
I couldn’t tell if I feared alcohol or myself and it didn’t seem to matter which.

Yesterday I found a bottle of Maker’s Mark Mint Julep on the top shelf of a bookcase in the basement (it was Day Forty-Two).
Instead of red wax it had green.
It had been there on the top shelf a long time.
I had to rinse the dust off of it before I opened it.
I filled a glass with ice and poured some in.
It tasted sweet and the sweetness helped to ease my fears.

I was watching Henry and June in the basement.
I had seen the movie before but not in a long time.
In the movie Henry Miller’s wife June is unhappy with the way Henry has portrayed her on the page.

“You make everything ugly!” the movie-version June says.

This was the reason I didn’t want to write about myself anymore.
I was afraid of making myself  - and everyone around me – ugly.


Mickey and Mallory Are My Spirit Animals

I was in a casino in California
You weren’t allowed to use dice in a casino in California
But I was playing slots (so that didn’t apply to me)
The slot machine I was playing featured white tigers
I didn’t care about white tigers
I’d picked the machine for the absence of people on the neighboring machines
(I didn’t like people)
I put in twenty dollars
The most I had ever won playing twenty dollars was sixty dollars
I played for ten minutes
I was up to forty dollars
I thought I might top my highest win
A cocktail waitress came around and I waved her away
I didn’t drink in casinos
(I only drank alone in my basement!)
I was up to fifty-five
Two men sat down next to me
I caught myself catch my breath
Outwardly I pulled a lever
Inwardly I made this sound: fuuuuuuuuuuuck
One of the men put money in one of the machines
(fuuuuuuuuuck)
I couldn’t see what he looked like
It didn’t matter
I pulled a lever and lost five dollars
I pulled the lever again and lost five more
“How do you play these?” one of the men said to me
(fuuuuuuuuuuck)
it didn’t matter which one
“I don’t know,” I said, staring straight ahead at my machine
I increased my bet and pulled the lever
“What’s your name?” one of the men said
I stared ahead
It didn’t matter which one
“I don’t speak,” I said
I increased my betting
I was down to nine dollars
I was down to six dollars
I increased my bet
I waited to bottom out
I couldn’t wait to bottom out


I was watching Eternal Sunshine of the Spotless Mind. I had only planned to watch the first fifteen minutes but after fifteen minutes I couldn’t stop watching. At one point, after the fight that leads to their break up, Jim Carrey is driving in a car and Kate Winslet is walking on the sidewalk trying to get away from him, and Kate Winslet yells, “Get out of my face, faggot!” I had been smoking a cigarette when Kate Winslet yelled this and I sort of reverse-inhaled the smoke and coughed it back out several times. It’d been eleven years since I’d seen the film in the theater. A lot had happened in the culture since then. Social media had happened, I mean. I got out my computer. I looked on Twitter to see if there was any outrage already in place to which I could add my name. I did a Google search of Charlie Kaufman’s name to see if his star on the walk of fame had been revoked. I couldn’t find anything right off the bat but I kept looking!

Elizabeth Ellen has a book of poems coming out sometime. And this tumblr.