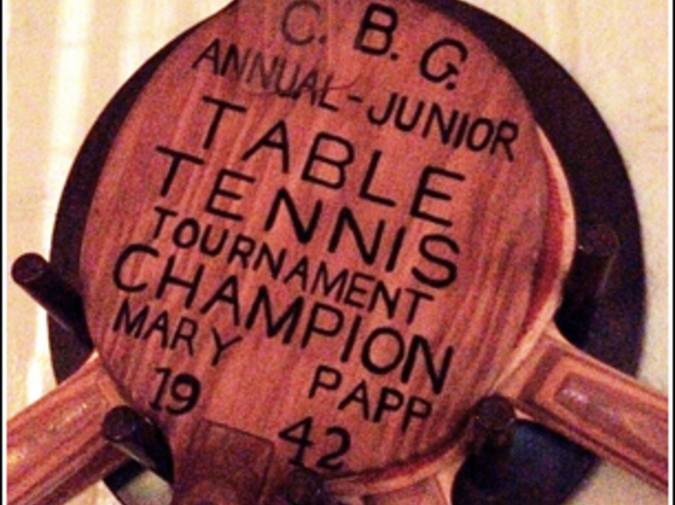 It was the day after Christmas when our parents began to argue and we went down to the basement, to our new Titan 360 Pro ping-pong table, my brother Ari and I. We were unsure about the game itself. We’d never had any use for actual tennis, for the precision of serving, the expensive rackets, the white shorts and sneakers the tennis players wore at the snooty club across town. We were soccer kids, preferred our games messy and earthy and fluid, our black cleats worn and cracked with age, our fields all mud and divots and geese shit, our polyester jerseys stained with dirt, streaked with blood.

But the argument upstairs was painful—another woman, the bottles of wine our mother kept hidden in her rock garden, tucked inside the holly—and we were restless. It had already been a bad winter, the snow piled high on either side of our driveway like bunkers for an arctic, suburban war. We’d spent too many days sitting in our own stink watching The Price is Right,guessing the cost of blenders and entertainment centers while our mother read novels about the Holocaust and our father went to work in his Highlander, extolling the benefits of four-wheel drive.

Underground, we picked up the wooden paddles, ran our fingers across their red, stippled faces, served our first, awkward serves, volleyed. And it felt silly at first, the ball light as a hollowed out Easter egg, its bounce a cartoonish click. We were trained to do so much more with our bodies, to Cruyff and scissor and corner kick, our arms and legs muscled from dribbling through strings of cones, from weaving up and down sidelines, from thousands of suicides. We laughed, shrugged our shoulders. We used too much force, the ball careening against the gray basement walls, or hitting the ceiling, flying away from us to die on the industrial carpet.

Slowly, though, we developed what our soccer coaches called “touch,” learned the nuances of top spin and back spin, experimented with the flick, the block, the chop shot. Our rallies grew longer, more heated, our bodies slamming into the gray walls as we struggled to return the push, the loop, the lob. We played best out of three, best out of five, best out of seven, the sun shining cold and hard outside the tiny basement windows. When we were hungry, we snuck upstairs for turkey and Doritos sandwiches. Or we microwaved American cheese on Ritz crackers, or chicken nuggets, the pale centers burning our tongues. Soon our paddle handles shown with sweat and grease.

Best of twenty-one, best of thirty-nine, the light out the windows gone blue-gray, and we decided to create our own honorary paddles, crept into the unfinished side of the basement, which our father had used as an art studio, before we were born. We took out his old tempera, revived his stiffened brushes with warm water, painted the wooden sides red and gold, wrote our ping-pong nicknames in black sharpie.

“Sarah Ballerina,” my brother wrote on mine, for the way I sometimes spun when I served, and leapt gracefully for returns, my girlhood dance training seeping into my game.

“The Fireball,” I wrote on my brother’s, for his temper, our mother’s Irish temper, everyone said. The year before, when a teacher accused him of cheating on a spelling test, he had overturned his desk, ran away, had to be coaxed out of the a crook of the playground’s curly slide.

“Control yourself,” our parents were always telling him, handing him his Ritalin.

Though in other ways, he seemed more comfortable in the world above the basement than I ever was, with his pack of soccer-playing boys, his confident slouch, his button down shirts from American Condor in the Hawthorne Mall. Up there, I was a pale, thin-voiced girl dressed in boy’s clothing, a girl who read horror novels in band practice rooms during lunch, a girl who looked at her feet when we she walked, who already had her mother’s hunch.

Down here, I looked for any advantage, took pleasure in goading my brother into fits, singing “We are the Champions My Friend,” when I won, which was rare; he was the better athlete. His face would turn red. He would hit the ball across the room, then throw his paddle, so that it became chipped at the edges. He would demand another game—best out of sixty-three, best out of seventy-seven, best out of eight-nine, and if I didn’t agree I was a quitter, and thus automatically forfeited the championship.

“Okay, okay, okay,” I would say, smiling, collecting the ball from behind the water heater.

And I wish I could tell you that as the games went on, I grew more sensitive. I wish I could say that as the argument upstairs intensified, and outside the neighbors took down their Christmas lights, dumped their bare Christmas trees at the bottoms of their driveways to shiver in the wind, I became a better sister, that when, at best of four-hundred and fifty-three, my first boyfriend appeared on the basement steps, I didn’t leave Ari mid-volley to make out with him in the art studio, didn’t lose track of how much time I spent there, in the fetid dark, tunneling into my own heat, my own blood roaring in my ears. I wish I could say that at best out of seven-hundred and one, when the sun set and the windows went dark and my brother’s face flushed with acne and the words upstairs changed to the sound of objects being thrown, I knew the value of our ritual, knew to protect it from my own selfishness.

Instead, I disappeared again and again, emerging, tired and hickied and eventually, sore, to find Ari fallen asleep watching the Knicks, a plate of cracker crumbs on the coffee table in front of him. Or he and his friends would be playing Madden NFL and drinking Red Bulls.

“Hey,” I would say, while they virtually tackled each other.

He’ll feel that one tomorrow, John Madden would proclaim.

“We’re playing,” Ari would answer, refusing to look at me.

Other times, though, I’d come back and it would be just us again, a brother and sister alone in a quiet basement, in the middle of a winter that would not end. We’d listen to the crashes upstairs, guess at which objects were being thrown: Our father’s paintings from the seventies? Our mother’s Fiesta Ware? The expensive paperweights she got as teacher’s gifts, golden apples shining in watery glass, prehistoric insects we didn’t know the names of, stuck in amber?

Better not to listen too hard. Better to take up our paddles, to begin again, then again, while outside the sun rose and the air warmed, and the snow, at last, melted, spilled down the driveway in dirty rivers. Better to master our regulation 9 foot by 5 foot, black top surface, to angle our shots to nick that pro-quality edge banding and striping, to brush against the padded corners, while our mother threw away the bottles hidden in the holly and our father threw his clothes into garbage bags, got in his Highlander, and moved out.

It was summer, the basement windows full of black-eyed susans, when our mother stood at the top of the stairs and told us to come on up, it was time to quit playing, it was time to pack our things, I was going to college and she was selling the house, buying a smaller one, without a basement, without room for a ping-pong table. By then our paddles were barely functional, the stippled rubber worn away from the faces, the red and gold paint dulled, the nicknames blurred with sweat. Before we left, Ari put them in a shoebox, along with his old soccer cleats and my Debbie Gibson mix tapes, buried it all in the backyard as a kind of time capsule.

I haven’t played our old game since. My mother tells me Ari and his wife have a table for their children, in their new house, down the street from 12 Loring Place. I’ve never seen it. I live far from there, don’t get back much. I have reasons for this, and they are sound, but I regret that I don’t know my brother well as an adult, don’t know if his marriage is good, don’t know the ways in which it breaks down, as all marriages must, at times, break down. I don’t know how often his children go underground to escape that powerful breaking.

And I don’t know what he remembers of our childhood, or if he wonders, the way I sometimes wonder, when my own walls have gone gray, if the next family at 12 Loring Place ever dug up our capsule, and if they did, what would they think of it? Would they guess that we spent more time at a ping-pong table than we ever did at the expensive, mahogany one upstairs, the one bought at an antique shop in Rhinebeck, the one meant for families to eat and talk and love each other at? Would they guess, from these tarnished artifacts, that we played until our wrists ached and our bodies thrummed with heat, until the walls were scuffed with paddle marks like cave wall paintings, like hieroglyphics, until we had made, with that light, airy ball, a language of our own, an intricate, rhythmic click, click, click, that, however broken, however halting, however flawed, was better than staying still, better than sitting in silence, listening to that other back and forth, that other song that played, with such force, above us?

Meagan Cass's fiction has appeared or is forthcoming in Hayden's Ferry Review, The Pinch, Grist, NOÖ Journal, South Carolina Review, and elsewhere. She is currently an Assistant Professor of Creative Writing at the University of Illinois Springfield.