photo essay to accompany "We Shall Fill Our House With Spoil" 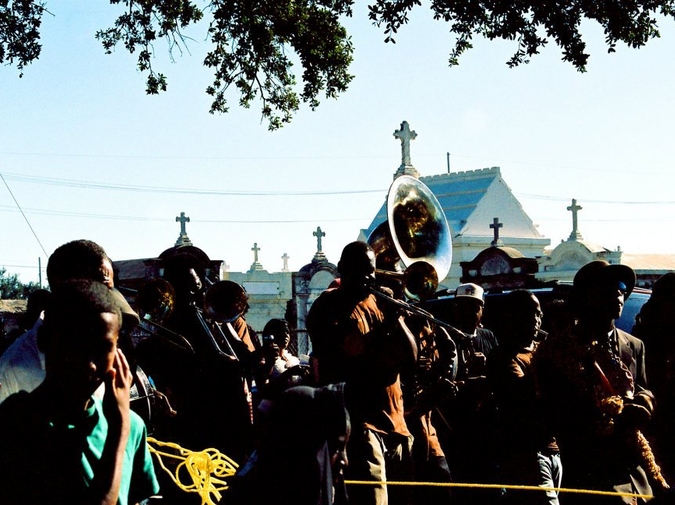 Below is a photo essay by Delaney Nolan to accompany her story, "We Shall Fill Our House With Spoil" included in Hobart 14. 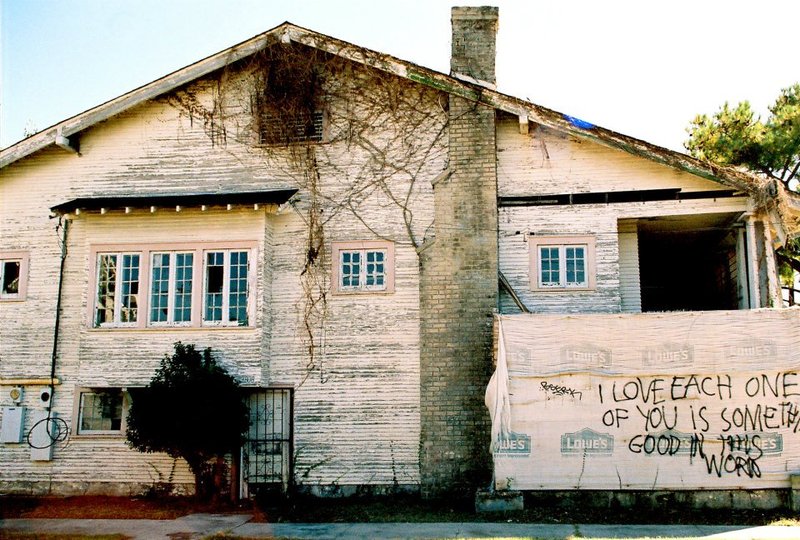 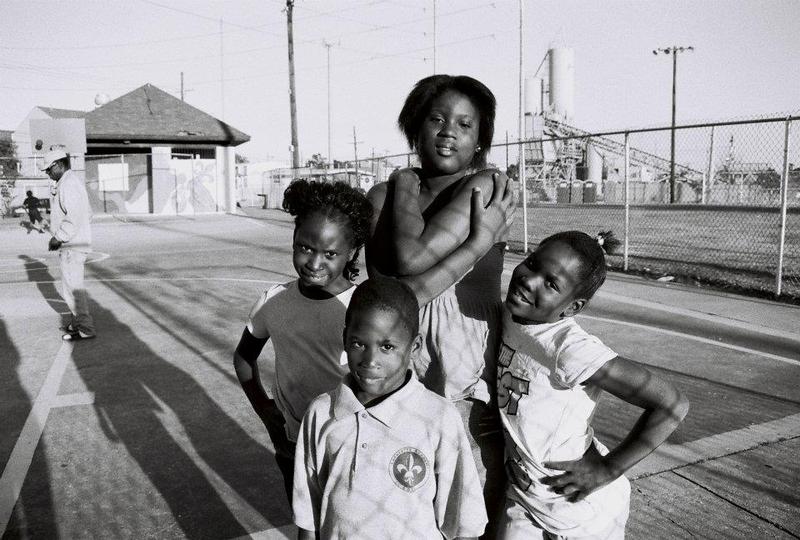 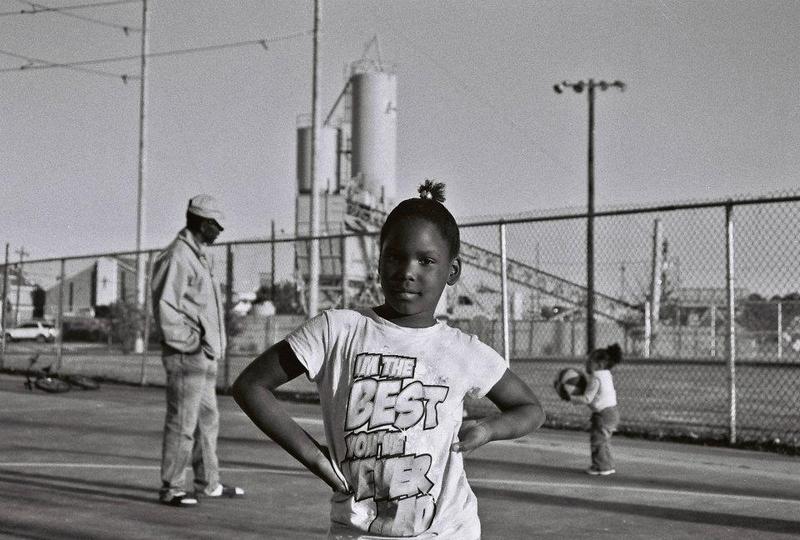 2 & 3 -- a playground somewhere near central city. i went to photograph the factory in the background, but ended up playing a little bit of basketball with these kids. they wanted to see their own selves in the camera. they kept running up to check the back. they liked to look through the viewfinder, even though they saw the same things with the naked eye. they were disappointed to find it wasn't  a digital camera. they were still pretty excited to pose. 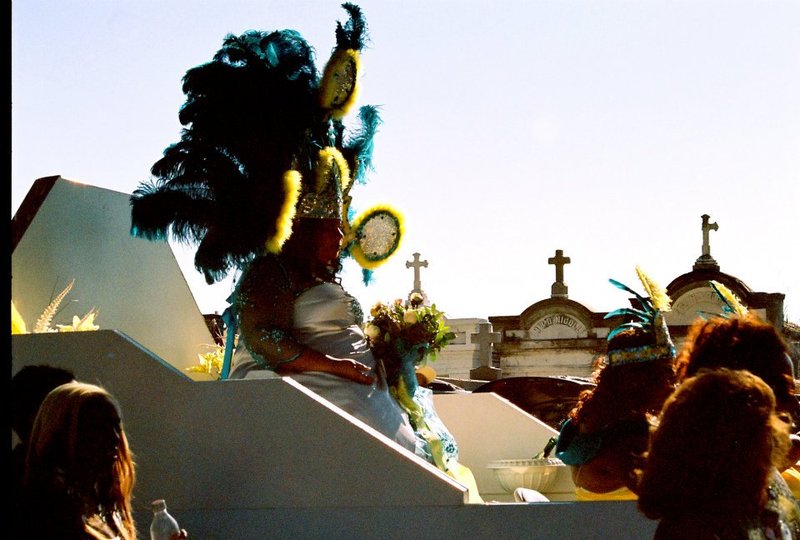 4. this is a float from a secondline parade. during the season, secondlines happen every Sunday: a big neighborhood outpouring where different Krewes get dressed up real pretty and get on floats and brass bands and dancing and barbecues and drinking down the street. it's difficult to explain, but you oughta dance in one. here it's passing Lafayette Cemetery #2. i guess this girl was the queen. what i'm trying to say is: it is a time for dancing and streetbeers; nevermind the graves. 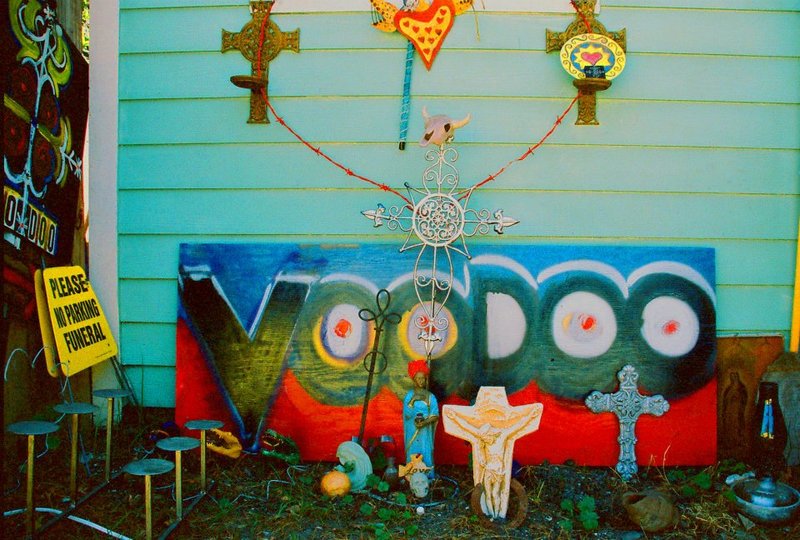 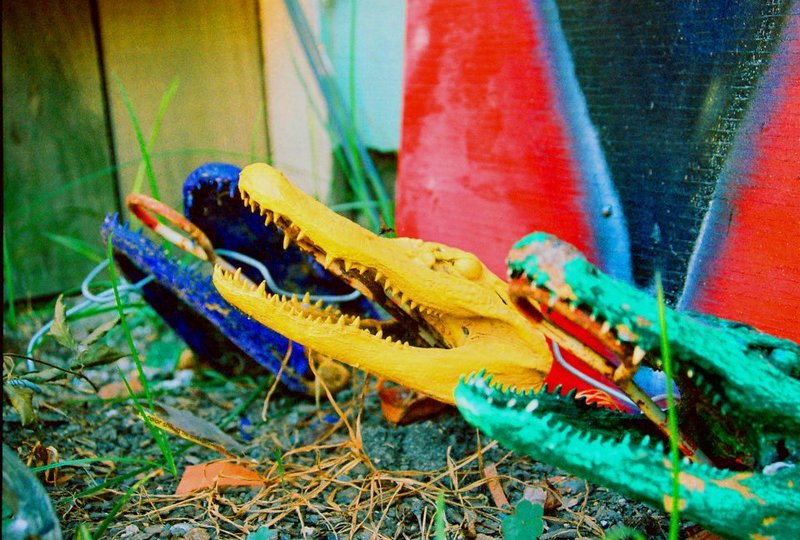 5 & 6 -- these are actually installations that an artist in my old neighborhood near the tracks made. my friend and i passed him one day and we ended up talking. he gave us a 5 to run get mixer because he'd been getting paid in cases of Smirnoff. then he gave us a canvas and let us go crazy; paint everywhere, acrylics on our hands, on our faces, outside under the streetlamp. we hung that big crazy heart in our kitchen. didn't have a frame. six feet high. he ended up being that weird old guy who still has his parents do his laundry and called us every couple of days for a while and we were like MM-MM NOPE, SORRY BUDDY. but yes to: voodoo, sharp teeth, primary colors. 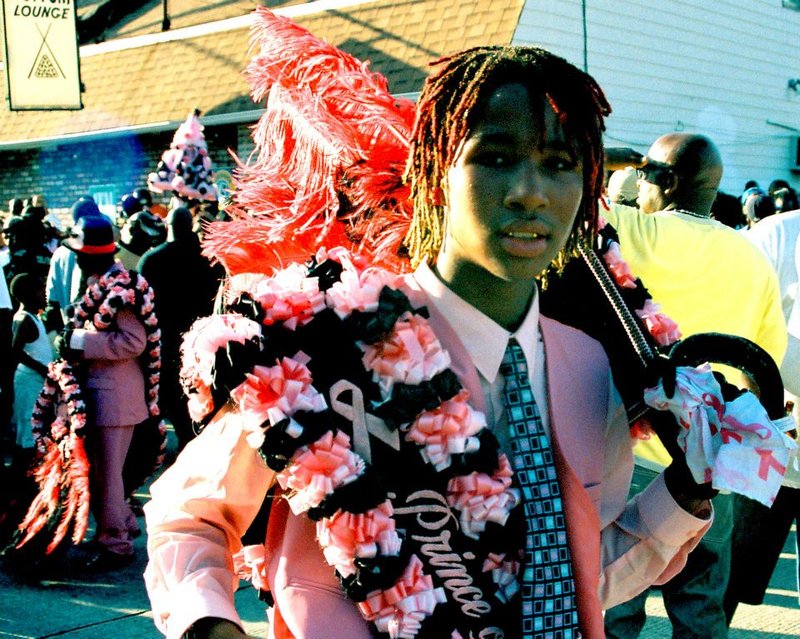 7. this boy was at the end of a secondline. 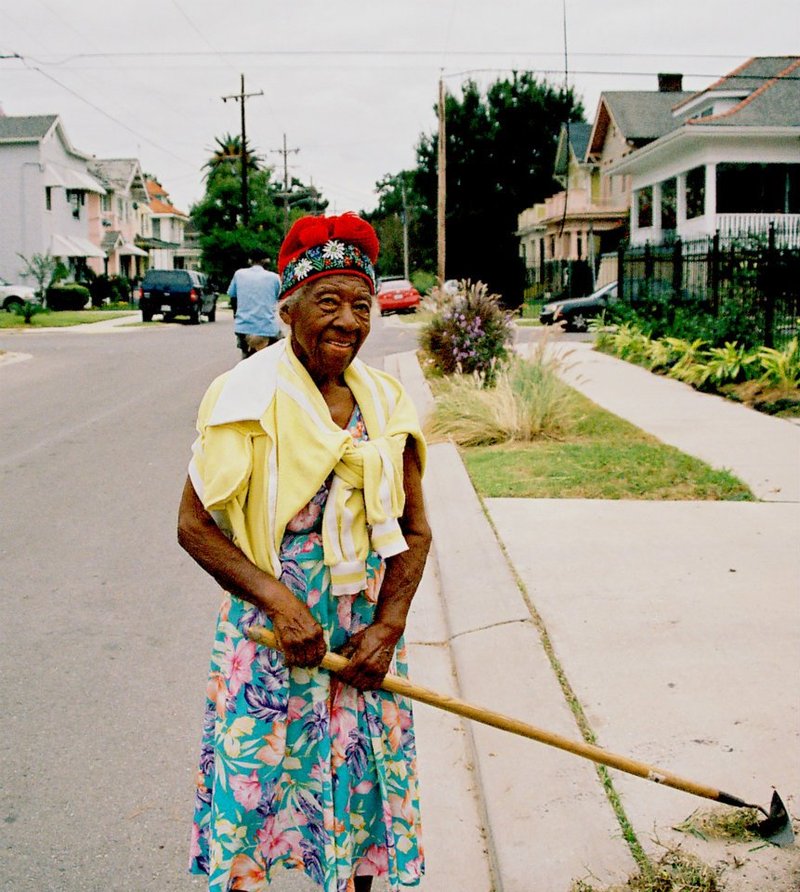 8. this my old neighbor. wouldn't tell me how old she is. her house all covered with faces and signs and little animals. she gotta be 100+ but rakes her own goddamn yard. got a child's shoes, a child's hat. gloamy eyes. couldn't see a thing. 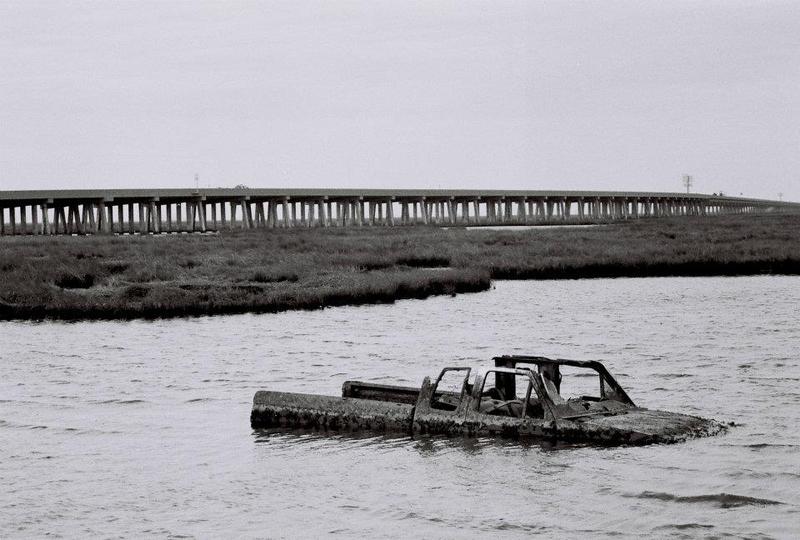 9. down by grand isle, way south Louisiana, by the gulf. you go to Grand Isle you cross miles of highway arcing over bayou, like you could fly out and hit the water any second. we'd gone down to plant dune grass. got there late. we shucked oysters by the fire with raw and idiot hands, knifing into the soft joint the animal tried to hide, and threw them onto the hot grate, wiping grit and freezing mud on the legs of our jeans. they were hot and cold at once down your throat. we pulled waders over stiff legs and walked carefully into the sea. half-blind, gilded silver. standing in the open ocean like reckless, take that. moon leering. scared of crabs. all of us, moved by tides, waltzing in pairs. the blue and alien moon, the horizon in every direction. rigs winking. and yeah, the next morning, this is what we saw. sitting in the water, rusted. 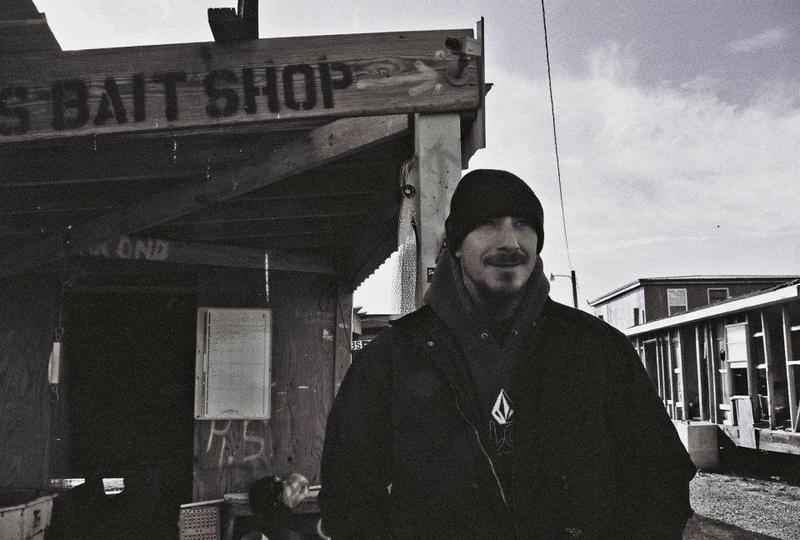 10. Raydo we met on the way back from Grand Isle. his cousin owns the bait shop. he told us business been bad since the spill. he told he is part Houma and the best time to plant grass is near a full moon. he waved us off to play on the nearby boats. 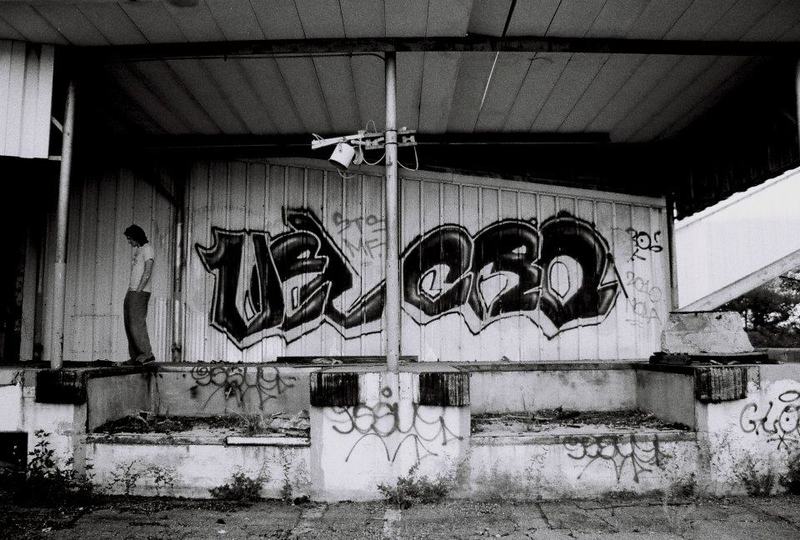 11. this is the outside of an abandoned Dixie Beer factory. on the left is my ex-boyfriend, who actually had the Video Classifieds job from the story-- his friend's dad started the company, which, of course, failed miserably. he told me about it one night, which is how the story got started. then he dumped me, which is how the story got finished. now he works in a pizza place or something, so who's laughing now, huh bitch? huh?! yeah, i thought so. hippie. 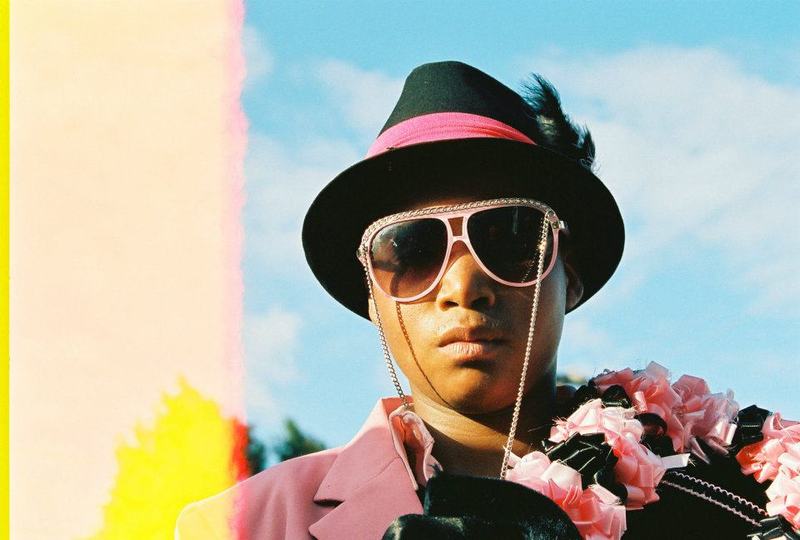 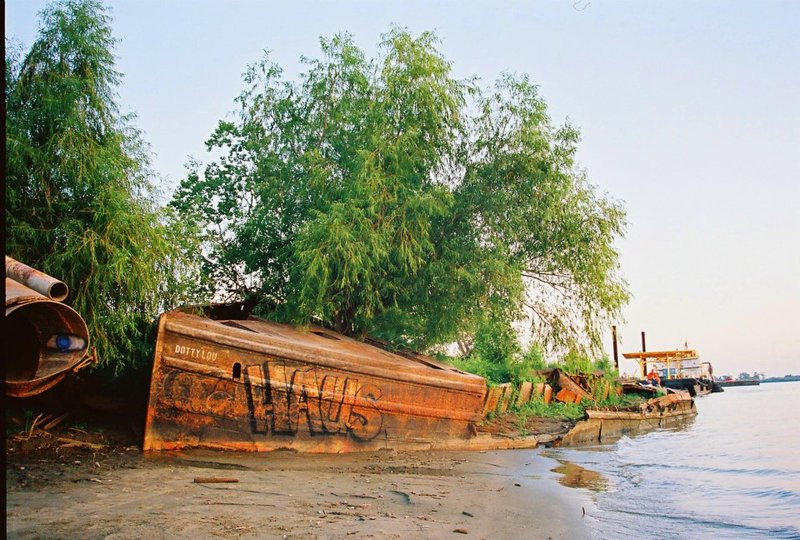 13. cross the tracks, cross the levee, down the Mississippi bank, you can find some tilted over platform that they maybe used to use for fixing boats, it got washed up by some storm maybe. now it's covered in graffiti and you can climb all over it. at the bottom of it is the Dottie Lou: this rusted ship with a tree growing through her middle. in the spring, she blooms.

Delaney Nolan's fiction has appeared or is forthcoming in Apt, Gargoyle, Guernica, Grist, PANK, Post Road and elsewhere. She is the recipient of a Sozopol Fiction Fellowship, a Bread Loaf work-study scholarship, and the Ropewalk Press Fiction Editor's Chapbook Prize for her forthcoming chapbook Louisiana Maps. She will be the artist-in-residence at Klaustrid in Skriðuklaustur, Iceland this winter, where she plans to eat a reindeer.