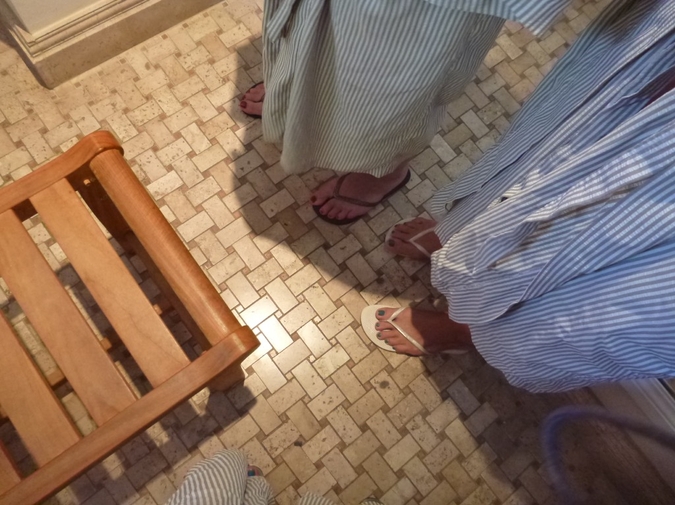 I didn’t ask why you spent all that time and energy making a hole with all the wrong tools instead of calling the landlord. You would have said something about having to explain and getting mansplained in return, about having to deal with that useless pile of handyman whose words and time fell out of a mouth like a freeway exit. And it would’ve taken him days or even hours to do what you managed in a few minutes even without that fucking drill. With only a screw, a screwdriver, and a pair of old scissors, you leaned in hard and bored a hole right through that cheap, hollow door. A perfect hole like you’d drawn it with a compass or carefully traced around a quarter. First you drove the screw in and out over and over on the inside of the door and carefully carved out what was left with the scissors that are probably ruined now but who gives a shit. Then the outside in, standing in the hall, hoping the new neighbor’s creep of a boyfriend doesn’t come out for a smoke, which is just his excuse for getting in the fucking way so we have to talk to him, making a stinking cloud of himself we have to walk through. The outside took less time because you’d already perfected your technique or maybe because you didn’t care and were rushing to get it over with. Because the peephole itself, a cylinder of brass and glass like some old-time ship’s instrument until you stuck it inside that cheap door, would cover up any imperfections anyway. It just had to be a tight fit so nothing could sneak around its infinite sides. So I didn’t ask because I knew by the way you hurried me into the room to look through the fish-eye lens at the distorted hallway with only you in it, smiling, that you just didn’t want him or any man looking through the hole you’d made first.

Melissa Moorer's work has been published in many luminous journals including Electric Literature, Broad!, The Butter/The Toast, The Offing Mag (forthcoming), LCRW, Hot Metal Bridge, FLAPPERHOUSE, Vestal Review. She was Assistant Editor at The Butter where she wrote 'This Writer's On Fire' series for Roxane Gay.