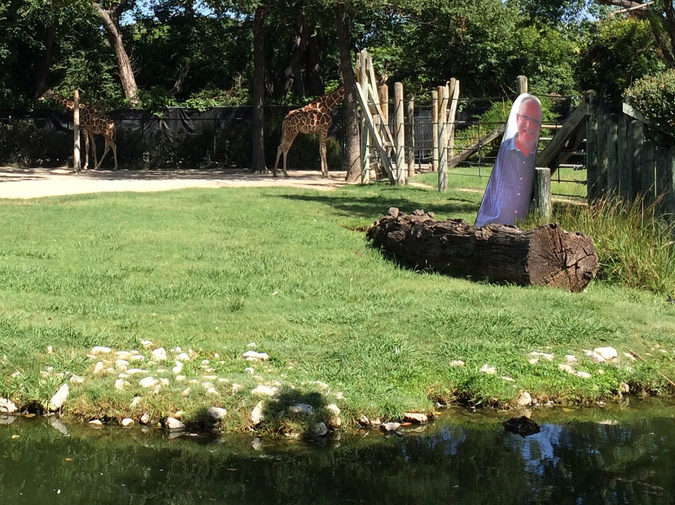 For our one-year anniversary I give Amanda a photograph of the two of us in Madrid. We’ve set the table to approximate our favorite Spanish restaurant, with the blue-and-white checkered tablecloths, the tall, skinny pitchers of Sangria bursting with citrus. It’s early in the evening. She’s turned up the Flamenco music, and she’s stomping and clapping, shaking her soul loose under the living room skylight. I rise to join her, but she’s off somewhere, dancing to the coat closet, and seconds later she’s back, with something—someone—in her arms. Dancing to me, she smiles, and when the music ends, her smile breaks into laughter.

I look at the strange object. It’s a white cylinder or, more accurately, a tall egg, tapering at the top, roughly two-thirds her size. It has a full-body photograph of a man printed on it. He’s about my father’s age. He’s happy and ordinary and unassuming in his brown braided leather belt. He’s definitely someone’s dad or granddad, some customized gift whose gag has played itself out and now for some reason is in our living room, in Amanda’s arms.

“I read online that whimsical gifts are perfect for first anniversaries,” she says. “When I ran into this guy at a garage sale, I couldn’t resist.”

“I thought you might like to photograph him.” She balances the inflatable dad in front of her and puts her arms around him, pretending to laugh at something he said like she's posing for one of those stock photos that come in picture frames. Her delight infects me. I pull out my camera and snap a few shots, adjusting the aperture as I go.

Our Man, as we now call him, lives in the kitchen. Amanda has set up a spot in front of the breakfast table where every morning she props him in a tableau for me to photograph—eating breakfast and reading the paper, wearing an apron and cleaning the table or windows, chopping vegetables. He’s wonderfully absurd doing chores with his two-dimensional arms that never move from his sides.

After a few days, I find a new, exciting addition next to Our Man: dry-erase markers. Amanda has begun to draw on him—mustaches or make-up or sometimes both. I marvel at how well she seems to know what will inspire me. I spend more and more time in the kitchen, photographing Our Man in these domestic scenes, capturing the shine of his lips and the glare on his bald spot.

When I’ve run out of ways to photograph him at home, I seek bigger and better photo opportunities, taking him out on the town, taking pictures of him at the zoo, the park, the art museum, the lake. When I break for lunch, I bring him with me into restaurants and seat him in a chair next to me, and the servers always bring him a side dish and a drink on the house. His unusual shape makes him interesting to strangers, who pet him and laugh like he’s some nice, funny animal. Everywhere we go, he draws attention, and soon I realize I can use this to my advantage.

Instead of setting up my own tableaus, I leave Our Man out by himself, with two boxes: one filled with clothing and one with markers. I wander off behind a tree or a wall and wait. It’s amazing how many people not only stop to gawk at him but also dig right in, dressing and making him up as they laugh, propping him up to look like he’s watching the lake or the animals or the art. When they leave, I get to work. It’s surprisingly intimate, photographing the work of strangers, the results of their hands on Our Man, smelling on him the traces of their shampoo or whatever they ate for lunch. I see that intimacy in every picture, all of which have gone beyond the absurd to take on a strange emotional tenor. When strangers dress Our Man, he becomes vulnerable—to their touch, to their admiration as well as their mockery. Once, after some teenagers clothe him in a dress of Amanda’s and draw full beauty make-up on him, a woman follows behind and deflates him. We’re at the water’s edge and I photograph him limp and lifeless, waves lapping at his face, threatening to drag him out to sea. When Amanda sees these photos, she cries and says maybe the project is going too far. I think she may be right, but I can’t stop. I still have too much learn.

I search thrift stores for new outfits and experiment with what clothes and props I leave out with Our Man. Nine out of ten times if I leave both men’s and women’s clothes, people choose the women’s or both. But when I leave only women’s clothes, no one touches them. I make notes. Men in women’s clothes only funny if choice.

By and large, people love Our Man. His unassuming smile, his vanilla outfit. He can be anything to them—a pal, an uncle, a man about town. There are no more acts of hate, but still Amanda worries about him. About us. She leaves notes on Our Man like, Be careful today! And, Look over both shoulders. I photograph them.

I feel close to understanding something important about Our Man. I come up with a new idea. Instead of photographing him, I take pictures of the people who dress him up, first with Our Man in the shot, and then without him, close-ups of their expressions as they examine the fruits of their labor—laughter, amusement, curiosity, and even sometimes doubt or regret, fear or shock. Our Man elicits so many feelings. He’s showing me so much about the human heart. Amanda says she has to admit these photos might be my best work yet.

But something is still missing. One morning I meditate over the photos, losing myself in Our Man’s happy gaze, in the stares of the people who’ve dressed him, in everything their eyes seem to know—or think they know—about him.

When I leave for my photo shoot, I leave Our Man behind and bring the clothes and some of Amanda’s makeup. I go to the park in a black tank top and bicycle shorts and hang a sign on my chest that says “DRESS ME.” I remain perfectly still until someone stops. At first he merely circles, like a cat sniffing, but soon he takes a careful leap. A fedora, gently placed. He assesses me, deciding if it’s right, planning what’s next. My pulse quickens at the sight of blue lipstick and eyeshadow and again at the tickle of the stranger’s hand on my lips and eyes. With every addition, I feel myself coming alive. As he clothes me in a man’s pinstripe suit with a pink, frilly apron on top, I’m grateful for the sensation of being held.

When he departs, I photograph myself, then peel off the suit and wait again.

An hour goes by before finally another person stops. With confident hands, they make for a floral sun hat to protect my head. Then slide me into baggy overalls, leaving my arms and ankles to be teased by the wind. Snap. A few minutes later someone else approaches, reads me anew: bubble-gum lipstick, blush, and pigtails. My giddiness increases. Snap. Another: plaid dress shirt and dark tie—impenetrable armor. Snap. Soon I’m submitting to a pair of strong arms enfolding me in a tight black dress ablaze with embroidered fire, allowing my feet to be steered into combat boots.

When the sun gets low in the sky, I pack up and hurry to the darkroom.

Photographs in hand, I rush home, eager to show Amanda my many faces—the ones she’s seemed to know even before I have. I find her in the living room, scanning the bookshelf and swaying to a silent rhythm. “Guess who,” I say.

Beaming, she waltzes to me, her arms an invitation. She glances at my pictures. “That’s easy,” she says.