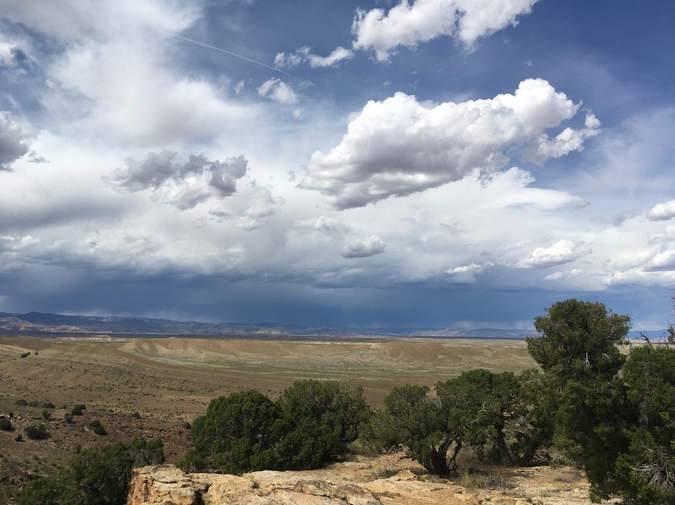 I murdered the cat on a Tuesday and by Wednesday morning I was back to work, saying nothing to anyone, scanning milk cartons and zucchinis and rolls of toilet paper. I spent the day saying, “That’ll be twelve ninety-five,” and “Would you like to sign up for our rewards card?” and “Would you like to round up for the Humane Society today?” I didn’t tell anyone I murdered the cat. They’d have been shocked or they wouldn’t have cared, and either response would have been unsatisfactory.

Anyway, technically speaking, I did not murder the cat. I did not hold the syringe.

But I did hold the cat. And not long before that, I held a pen. How different is a pen from a syringe, really? Both long instruments with tapered ends. Both used to administer crucial substances. Poison. Ink. I did so little and so much. I scribbled my signature, and after that I held the cat.

It occurred to me, in those moments before the vet came in, that I could get up and walk the cat past the grainy brown door, out of the lamplight, through the fluorescent lobby and into the drizzle outside. In the final dim setting of that skeletal wraith’s life, I was his landing place, his transportation, his ground. I could have walked him out of there, but I didn’t. I stayed still and let them fill him with poison, and my hand worried the white head, and I whispered nonsense words to the cat.

The cat had a name.

The cat had a name, but I won’t speak it yet. That name is still alive, and if I expose it to open air, it will crumble like an unearthed mummy. I will speak the name Dad instead. I will speak the name Dad and see an overstuffed magazine rack in a hospital waiting room. Time blocking People, People blocking Time. I will speak the name Dad and find myself bent over in a scratchy grey chair, staring at the glossy faces, my hands curled against the bony caps of my knees. I’ll return to the place I never really left, trapped in the immediacy of the moment, my mind screaming: this is happening it can’t not happen it will never not happen there is no getting out of it. The chorus of shock will drown out the options I’m supposed to be weighing, options for whether and when to help murder my dad.

There are all kinds of other words. Mercy, passing on, letting go, a difficult choice. Part of life. Sending to heaven. Saying goodbye. So many soothing words with the consistency of quicksand. Murder is a word made of stone. I’d rather call myself a murderer than drown in false ground.

If I stay in that waiting room long enough—the armrests digging into my palms, the celebrities’ smiles bleached by harsh ceiling lights—eventually I will stand and walk down the hall.

I will talk to the doctor in what my dad used to call a church voice, low and hesitant, about morphine and dosages, about extraordinary measures and ordinary ones.

I will guide the pen tip across the open space above the line.

I will pause before a threshold and then cross it to enter a room.

I will let my hand hover over a maze of wrinkled flesh, knowing not to expect a response, and I will tell my dad about how I murdered him.

But maybe this time I’ll allow himself to touch him. Maybe this time he’ll be sitting up in bed, breathing with his own lungs, and he’ll look at me with his glacier-blue eyes and say, Oh, well, not every cat gets nine lives. And we’ll try for a laugh and play cards until he starts coughing, fives and aces strewn across the sheets with the gravity of foreknowledge that this is the one we’ll remember, this is the one I’ll remember. We’ll hold time hostage until the deck runs out, suspended in the moment between the pen tip and the syringe. And somewhere out there the cat will still be alive.

Kaely Horton received her MFA from the University of New Hampshire. Her work has appeared in Smokelong Quarterly, Stonecoast Review, Isthmus, Fourth River: Tributaries, Flash Fiction Online, and others. She currently lives in Oregon.