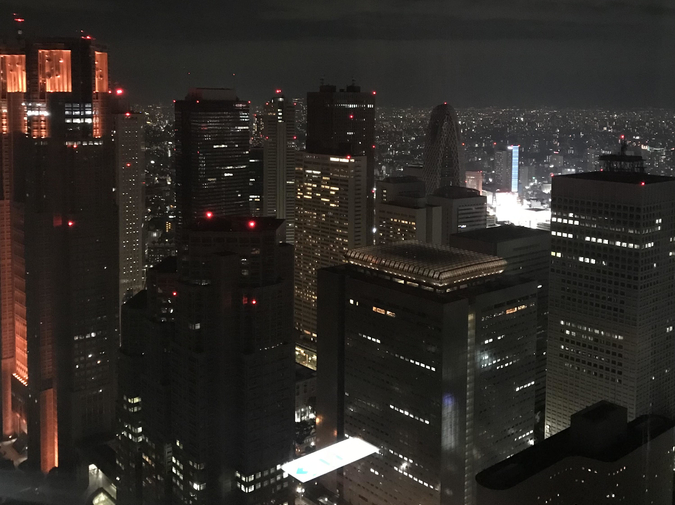 What they wanted was a drink after dinner. It was a long, lush meal, paid for with a corporate card. They had taken up four of the ten seats in the sushi restaurant, and the smallness of the room made them serious and giddy, as if they were being admitted to a secret. Because none of them spoke Japanese, they nodded at whatever the chef placed in front of them, self-consciously tried not to take too many pictures, and gestured for a steady supply of sake. Nominally they were toasting a successful week of meetings, but in truth it was the open expanse of a Saturday night away from home with someone else picking up the tab.

She didn’t want to go out and suggested a nightcap at their hotel instead. Her body still conformed to the phantom constriction of her dark suits, and although she took care to dress more casually for dinner, her jeans were starting to itch and she wanted to take a hot shower and change into pajamas. Her coworkers outvoted her easily, and one of them suggested the Park Hyatt, not too far from their hotel and where, he reminded them, Lost in Translation was filmed. He heard the rooftop bar had amazing views of Tokyo, like what they’d see in New York, but also, you know, different.

The reservation for dinner had been made for them by their business partners, and their lack of one for drinks was slightly worrying. But haven’t we all talked our way into bars before, her coworker offered. She pursed her lips. Technically when they crossed the International Date Line over the Pacific Ocean, they had each gained a day, but the afterglow of indulgence and the warm October night air made it feel like she was shedding days instead. She glanced at her coworkers and could see it was the case for them too.

On the way to the Park Hyatt, she looked up and saw round, stony blank faces staring out from the top of a tall building. Or maybe satellite dishes?  Backlit alien aircrafts?  She couldn’t tell, and for a moment, the disorientation felt particularly acute.

They were told to head to the New York Bar on the 52nd floor, and the irony of the name didn’t escape them – of course they had flown fourteen hours to go to a bar named after the place they had just left – but it didn’t deter them either. How do we look, they asked each other, and in turn, they looked at themselves in the mirrored walls of the elevator. The unavoidable pallor and paunch of office people speeding towards middle age looked back at them.

Quick, we need a backstory, she said, suddenly struck. Who are we?  We should pretend we’re –, she paused and considered. Two of her coworkers wore button-down shirts, but one of them had on an oversized hoodie and the garish sneakers he acquired that afternoon in Shibuya.

You, she pointed, you are a…up and coming rapper, and we’re going to be your entourage.

Ok, but don’t I need a rapper name?

Yes. You should have a Li’l in there, like one of those Soundcloud rappers. Something weird. Li’l Pumpkin?  Li’l Grate?

They were all laughing now.

She thought about the dinner they just had. Li’l Clam?

Fine, and are you my manager?  Wait, here. Li’l Clam reached into his pocket, pulled out a pair of sunglasses, and popped them on his face.

Well, no, I’m your publicist. But they can be your manager and driver. Ok guys, that’s the story. Let’s walk out there and say we’re with Li’l Clam, he’s in town for a showcase but only for tonight. Their expressions equidistant between amused and ambivalent, Li’l Clam’s manager and driver nodded. She looked at herself again as the display flashed 51, feeling undercover.

The elevator dinged. She pushed Li’l Clam’s manager to the front. Hey, remember – , but before she could finish, she could already hear his polite inquiry with no mention of Li’l Clam and see the host’s studied apologetic headshake.

Wait, but, Li’l Clam, she said, rolling the name around like a mantra. Li’l Clam, meanwhile, stood at the back in his sunglasses, glancing out at the clusters of bright skyline. No go, his manager answered. They’re booked solid.

Let’s just go back to our hotel, Li’l Clam’s driver said, even though he had advocated strenuously for the Park Hyatt. Maybe we’ll meet a Scarlett Johansson type, he had said.

But she, rising on the effervescence of make-believe only a minute ago, felt strangely let down. You sure we can’t have even just one drink at the bar, she asked no one in particular, a rhetorical question with no need for an answer.

On their way back to the lobby, they joked about getting drinks from a convenience store and making a dash for it into the bar, all swagger, security be damned. Li’l Clam seemed to wake up from his detachment and was now acting like he was drunk, requiring his entourage to hold him up. He stumbled and said he wanted to lie down. The spectacle turned their laughter sharper and a little breathless. As your publicist, Li’l Clam, I’m not sure I can advise that. She found herself slipping back into the same low clipped tone she used during the negotiations as if it were a favorite robe.

Li’l Clam walked over to a couch and lay down in front of it. His manager wheezed out, what are you doing, get up. Why not, she thought.

On the carpet, she closed her eyes and took the fingers of her right hand to her sternum. She pressed hard with three fingers, until she could feel the ridges of the bone. Breathe, she thought, as she forced her fingers down and her lungs to expand. Breathe before someone walks over and says, Excuse me, ma’am.

Mingpei Li was born in China and lives in New York City. Her poems have appeared or are forthcoming in Black Warrior Review, Cherry Tree, The Massachusetts Review, and Muzzle Magazine, and have been nominated for the Pushcart Prize and for Best New Poets. This is her first fiction publication.