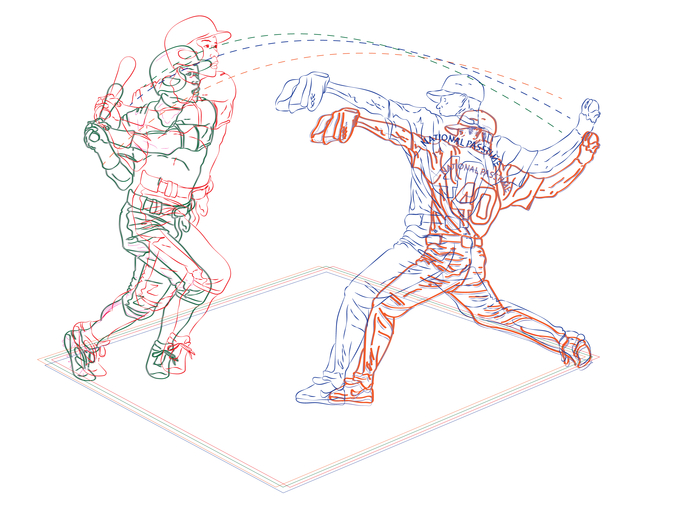 Somewhere in the archives of Baseball America, there’s a story by an Italian journalist named Giovanna de la something or other, and she attempts to verify, through old box scores and personal testimony, an at-bat that supposedly took place in the Venezuelan Winter League in the early 1980s.  Technically, it was a plate appearance.  Ended up HBP, but that only happened after four hours.  Three different pitchers.  Foul ball after foul ball and a series of minor delays instigated by, depending on the version, a pigeon or a goose or a troupial (or, according to one old man she interviewed just outside a prison in El Dorado, a pinche carpincho, which she translates as “fucking water pig”), and the hitter was from Missoula, Montana or thereabouts.  Didn’t speak the language.  Not very well, anyway.  Burger, they called him, but nobody could say if this was official or a nickname or an epithet, and the manager offered to take him out.  Twice.  Giovanna gets most of this on the outskirts of Caracas, and the men look at her with a mix of suspicion and lust while they drink Tizana and Cuba Libres and gesture emphatically with cigars, or at least that’s how she tells it.  There’s no way to know what kind of narrative she’s constructing.  Apparently, the editors say she provided copious notes.  Photographs.  And Burger gets these blisters on his hands.  Wobbly legs.  After a while, he doesn’t even leave the box, and there are people who tell her that it seemed like it was a game, like he was doing it on purpose, just sticking the bat out and fouling off pitch after pitch, and the article came out in 1996, and she took the trip in ’95, and in old, extant interviews or blog posts (whose authorship is often disputed), she argues that, in hindsight, you could see these latent elements of Chavism in the number of sources who claimed that the whole thing was meant as a subtle display of American imperialism, a sort of athletic version of gunboat diplomacy, and she often wonders if that was present in the earliest accounts or if it merely got added over time, and it is occasionally cited as the thing that motivates the third pitcher to finally hit Burger in the ribs.  To fire a fastball that catches him just underneath the heart, and he staggers a bit, and, though some people claim he died right then and there, the most common version is that he walks to first and takes an insane lead and is promptly picked off by a young Germán González, and that last part (she speculates) is almost certainly untrue, but she wonders if, somewhere across all baseball-playing nations, there isn’t a version of this same story, this same obsession with time and the sport’s theoretical infinity, and maybe it’s in humid Latin America and indoor Japan and even the good ‘ol U S of A, and she suggests that certain cultural values would be enshrined by the ending of all these hypothetical legends, the quick quelling of a long uprising, for example, or the act of suffering, of self-sacrifice for a greater goal, and here’s her final bet.  The final thesis.  She writes, “In your America, the story takes place in the bottom of the ninth, and it ends on a home run, and Robert Redford rounds the bases while light is exploding everywhere, and it's all the biggest display of pyrotechnics the world has ever seen.”

Brett Biebel teaches writing and literature at Augustana College in Rock Island, IL. His (mostly very) short fiction has appeared in Chautauqua, SmokeLong Quarterly, The Masters Review, Emrys Journal, and elsewhere.  48 Blitz, his debut story collection, is available from Split/Lip Press. You can follow him on Twitter @bbl_brett.