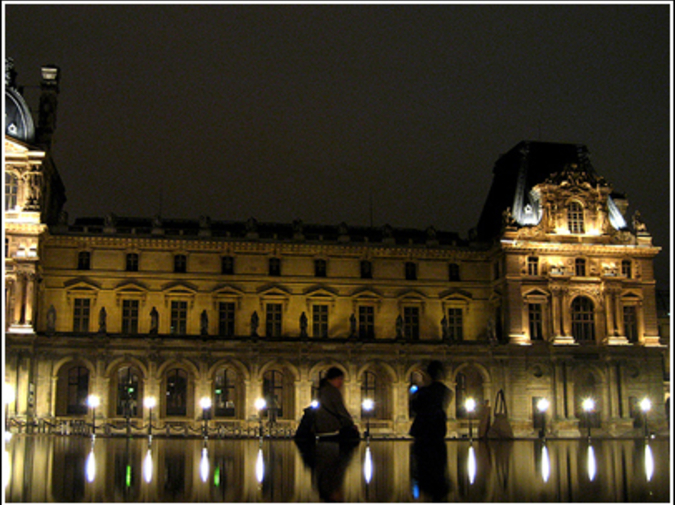 His accent was cute at first, but it's starting to get on my nerves. If he asks for another glass of Beaujolais I'm gonna go to jail for child abuse.

Yesterday, I walked upstairs to make him turn his new Jacques Brel album down and I swear it smelled like unfiltered cigarettes. To top it all off, Leah and I caught him wearing a beret.

I didn't buy it, my wife didn't buy it. The kid's six, for God's sake. Gimme a break, where does a little boy get a fancy hat like that?

I blame cable. In order to get the new ESPN, we had to beef up our monthly subscription. Now our household receives two separate channels of Eurovision.

But still, it's Eurovision, not French-ovision. I've never watched. It's supposed to cover lots of other countries, right? My boy could easily pretend he's Italian or Spanish or Dutch, even. I'd buy the little guy wooden shoes until he got splinters.

Instead, my son thinks he's French. Sure, it's not the end of the world, but it's just so French. You know?

Whenever I bring this up to Leah, she shrugs it off. She always paints me into a corner, saying something like, "well, would you rather he sing Barney tunes or Serge Gainsbourg?" She claims it's healthy because most kids his age have a skull full of grey pudding from too much Baby Einstein.

Actually, thinking back, she's fallen hook-line-and-sinker into this whole deal. Last week she watered down his pancakes and called them crepes. I don't have any proof, but I'm pretty sure we never used to buy Nutella, either.

Maybe we did. I don't know. You see, due to certain circumstances, I've only recently started paying attention around here.

But back to the problem at hand, a few nights ago I couldn't sleep and was watching the new ESPN channel. Bored stiff with men's curling, I dug through some old photo albums and stumbled onto my wife's college scrapbook. Never paid attention before, but at three in the morning it beat Canadians sliding rocks across ice.

Halfway through her senior year is a little page – a shrine is more like it. There's a snapshot with a big Magic Marker heart drawn around the face of a strange man with lipstick kisses all over. The guy is skinny, real skinny. He's wearing sunglasses indoors and drops a cool, bored expression into the lens. Underneath, in Leah's handwriting, it says "Pierre" with the i dotted by a heart. Call me crazy, but this dude looks a little like our son.

Don't worry, I didn't flip out. Though I was real close to shaking Leah awake, screaming about infidelity and all that. Then I realized her senior year of college was almost a decade ago. The math doesn't work. Leah loves me. She hates goose liver pâté. Case closed. That still didn't help me get any shut-eye. I've heard kids who learn a second language end up something like nine-times smarter. A sweaty guilt burned in my chest, knowing I am holding our boy back.

It's really important for kids to get every opportunity possible, even a heaping spoonful of French culture. I totally support that sort of stuff, really. But he is only halfway through kindergarten. Little boys shouldn't be able to pronounce existentialism, let alone quote Jean-Paul Sartre, should they?

How long has this French obsession really been going on? I admit I wasn't the best husband or dad for a while there. See, just before our son was born I snagged a whopper of a promotion. Now spending all those extra hours at the office helps keep the company afloat and keeps Leah in her gorgeous house, not to mention it keeps our son in capri-length slacks.

I know that's a terrible excuse. I'm a workaholic, no argument here. Leah and I even went to counseling for a while. But I couldn't stay away. I'm good at my job and people depend on me, it's a wonderful feeling to be so important. It's addictive.

However, my work ethic crash-landed a few days ago. An epileptic seizure hadn't snuck up on me since before we were married. Out of the blue, one blasted through my brain at dinner. I'd forgotten that sensation, that helpless surge of dying. Let me tell you, lying flat on your back waiting for your heart to turn to cement changes a man's priorities.

Luckily, I survived and vowed to be a better person. Now it's a strict forty-hour workweek and I spend so much time with my beautiful family Leah seems kind of annoyed. Coincidentally, that's when I started to notice my son thinks he is French.

Who cares, right? I agree, but it's an everyday struggle. He's still my boy and I still love him. I'll stick by that little rascal no matter what crazy country he pretends to be from. But this particular phase is just more of a challenge than most.

In my pursuit of being a better husband, I volunteered to clean out the garage yesterday. Digging through boxes, I found a clump of Leah's pictures. Big shocker, there was old Pierre again. It was impossible to tell just how short he was in that earlier headshot. Looks like he barely reaches past Leah's waist. The guy is tiny. Behind that cigarette and five-o'clock shadow, he's not so cool. A regular Napoleon. No need to be jealous, but still, I can't shake how he looks more than a touch like our little guy.

That same night, my tyke enthusiastically interrupted tuck-in time, stating his intent to grow up and become a socialist. I told myself, after kissing his forehead and checking the closet for Le Boogie Man, that was the final straw. I needed to do something. That's not the boy I've always loved.

But the more I think about it, who is the boy I've always loved? What did he look like as an infant? I don't remember him toddling around, learning to walk. No idea what his first words in English were. Couldn't even tell you if he prefers hotdogs or hamburgers, though I suspect escargot wins. I was at the office during those moments.

I'm a shitty father. You know it and I know it. My slugger's childhood is sweeping past me. This called for drastic measures.

I don't have a revolutionary plan. I'm still new at being father of the year. I'm supporting my son and his Franco-American ways the best I can and picking up another Jerry Lewis DVD isn't the answer. I decide to surprise the family with a vacation.

I buy three tickets to Paris and leave work early to surprise Leah and the boy.

I imagine their priceless, stunned faces. I'll hoist daddy's little buddy on my shoulders and sing whatever happy French people sing. Leah will smooch me a big wet kiss and whip up dinner while I watch ESPN. Father of the year, here we come.

Sadly, walking into the house this afternoon, my vacation plans belly-flop. It's a difficult day in a man's life when he discovers his six-year-old son has man-sized genitals and pubic hair. However, the really tough part is digesting this while the dude you thought was your innocent little boy nails your wife on the couch as she moans, "Pierre," loud enough to crack a window.

Patrick Wensink lives in Portland, OR. His stories appear in Monkeybicycle and Thieves Jargon. He is currently working to find a publisher for his first novel: BROKEN PIANO FOR PRESIDENT.