My Name is Kook 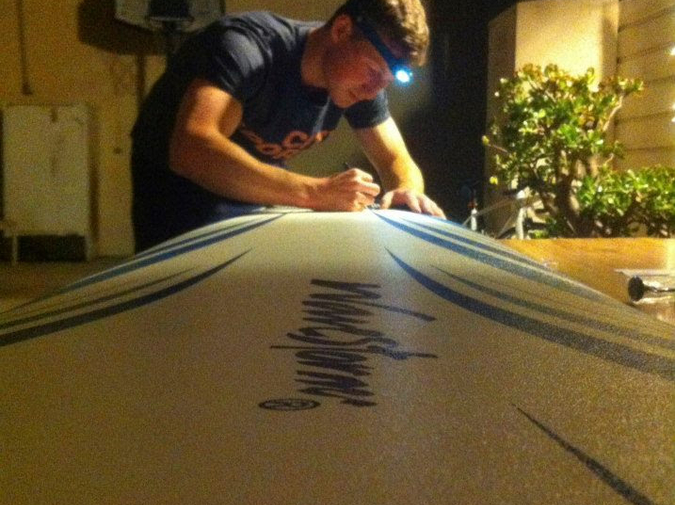 It’s a canned line from happy hours, job interviews, and attempts to appear geographically informed amongst West Coast expats: “I actually lived in LA my first year out of college.” The older I get, the more tenaciously I hang onto remaining badges of cool. And as elsewhere, my mind has gutted the mundane and retroactively added a veneer of California ease to this epoch – sunrise bike rides en route to dawn patrol surf sessions, artfully packed bowls puffed on the back patio, the half mile stretch of perfect longboard pavement where I’d clear my head.

It was a year well-lived, but glamorous only in its simplicity– I had 6 roommates, all of us year-long volunteers packed into a one story house, where minus rent and Costco we each earned only $100-a-month in stipend. Musical consumption was daily bread but limited to our collective iTunes library. Thus Weezer’s eponymous album soundracked both chores and indulgences – we scrubbed dishes to “The Sweater Song,” sipped Saturday night Keystones to “Buddy Holly,” dodged traffic in my roommate’s stick-shift Prius with the grungy “In The Garage” wiring through the car’s tinny, treble-forward speakers. The band’s ability to weave optimistic power chords with angsty choruses (“The World Has Turned and Left Me Here”) was an apt microcosm for the 22 year old – projecting confidence and experience, but not entirely free from the aftershocks of adolescence.

If the house was cramped our backyard was sublime, someone’s sarcastic ideal of West LA living – replete with a careworn cloth hammock and an avocado tree which bore fruit but was terrorized by an eccentric squirrel. It’s one of few places that my memory can recreate brick by brick, from the faded Mel Gibson poster under the awning to the chain-link hoop where my roommate Matt and I took turns lobbing alley-oops.

Matt and I worked blocks from the beach, so after months of saving up and falling off the preceding tenants’ short board, we coughed up $100 bucks for a Costco Wavestorm surfboard. The Wavestorm was our big ticket, our Red Ryder Carbine Action 200-shot Range Model, eight feet of plastic-foam fusion that sacrificed any semblance of cool for affordability and safety. As Matt studied surf culture through YouTube and stolen conversations with those in the know, we learned that owning a Wavestorm made us “kooks,” surfdom’s all-encompassing term for those at the sport’s fringe. A kook was someone who wore the t-shirts, spoke the lingo, but in actuality couldn’t catch a wave. In essence, it was us.

Regardless, we could scarcely contain ourselves when christening the new board – we went out back, cranked the speakers to “Surf Wax America,” inscribed her name (“Kahuna”) in Sharpie, and screwed in the plastic fins. We finished as Rivers Cuomo crooned the album’s penultimate track – night had fallen, but Kahuna was seaworthy. As we stepped back to admire our work Matt frowned slightly. “Wait,” he started, “we, uh, faced the fins in the wrong direction.” Kooks.

Sean O'Neill is a law student in Washington, DC, where he watches the White House's folly unfold from down the street. He aspires to write more and add to his underwhelming page at  https://medium.com/@SeanOfromBuffalo, but evenings often find him with a guitar in hand and an unfinished to-do list, wondering where the day's more productive hours have gone.