My Little Ponies™ and the Search for the Blue Crystal 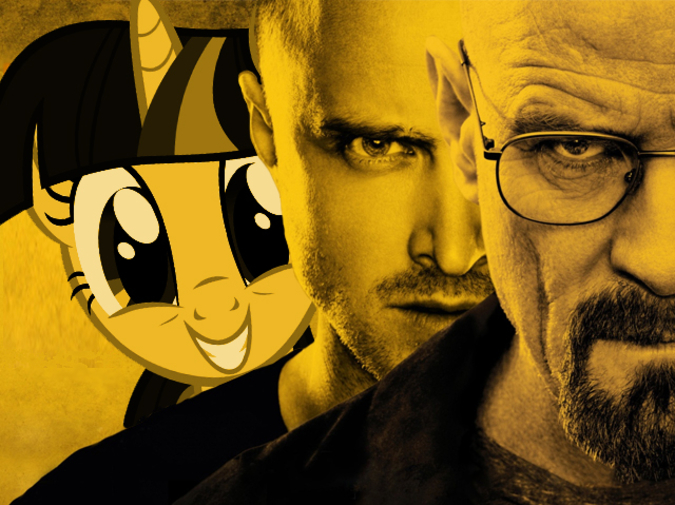 The sun rises on the great and beautiful land of Equestria. Applejack trots through town with a bushel of apples to share with her friends. When she arrives at Sugarcube Corner, no one is there. She continues past the Carousel Boutique, where a sign in the window says “Closed” and on to the Golden Oak Library. It also seems closed, but she goes around back. Rainbow Dash ushers her in. The other Ponies™—Pinkie Pie, Fluttershy, and Rarity—are all gathered around Twilight Sparkle’s bed.

Applejack: What’s goin’ on, y’all? Your shops are closed, and I couldn’t find anyone.

Rainbow Dash: We’re going on a quest to save her. Legend has it that when the White Stallion got sick, he was healed by the powers of the Blue Crystal.

Applejack: I’ve heard of the Blue Crystal. It’s supposed to be the purest in the land. But where can we get some for Twilight, y’all?

Rainbow Dash: We have to travel over the Magic Mountains and beyond the Salted Sea to the Desert Land of Albuquerque.

Applejack: Cool. I’ve got a cousin in El Paso we could stay with on the way.

Rainbow Dash: Okay. You, Pinkie Pie, and Rarity are going to stay here and take care of Twilight, because you don’t have wings…but also because even though this is an ensemble cast, it’s too hard to keep track of so many characters, especially if we’re going to meet up with more in Albuquerque.

And so Rainbow Dash and Fluttershy (the other Pegasus in the group) fly over the Magic Mountains, and across the Salted Sea, stopping to rest only once when they spend the night with Applejack’s cousin in El Paso (which is, admittedly, a little awkward considering that Applejack isn’t there) on their way to the Desert Land of Albuquerque. They search and search for the White Stallion, at every barn and pasture they can find, but no one seems to know who he is. Exhausted, and disheartened, they stop into a local diner to regroup and eat waffles.

Fluttershy: We’ll never help Twilight get her Sparkle back!

Rainbow Dash: We can’t give up now. We’ve come so far.

Fluttershy: But we’ve looked everywhere and asked everyone. They all seem confused, or a little afraid.

Rainbow Dash: We just haven’t asked the right people yet.

Coincidentally, despite the fact that Albuquerque is a city of over 550,000 people, Walter White (aka Heisenberg, aka the Alchemist, aka White Stallion) is sitting two tables over with his soulful and unkempt assistant Jesse. They are also having waffles, though Jesse hasn’t eaten any of his yet. The two are arguing. Their conversation gets more and more heated, and words start to filter over to the Ponies’™ table. When a guttural “Bitch” comes out of Jesse’s mouth, Rainbow Dash turns and makes eye contact. There’s a palpable moment between Dash and Jesse. (She has never seen this kind of desperation/desire in someone else, and immediately recalls her own emotional journey in Season 1 Episode 16 “Sonic Rainboom” when she entered the Best Young Flyer Competition. He, in turn, is drawn to her punky rainbow hairstyle and the depth of her sensuous purple eyes.) She bats her lashes and excuses herself from the table, brushing past Jesse on her way to the bathroom. Her long rainbow tail leaves a sweet scent that Jesse can’t help but to follow.

Walter White: Don’t walk away when I’m talking to you. What are we going to do about the cartel?

Jesse: You’re so smart, you figure it out, bitch.

Jesse throws down his napkin and heads for the bathroom. In the back hallway, Rainbow Dash is there waiting for him. She doesn’t say a word, just leans in and starts making out with him in a really soulful and sensuous way. It’s like they’ve known each other all of their lives, and they don’t even need to speak. Jesse runs his fingers through her mane which feels like the softest silk. He’s never been so turned on in his life. The kissing gets even more passionate, and pretty soon, they’re practically on the floor. Rainbow Dash is tapping her back hoof in ecstasy and fluttering her wings. Jesse’s rubbing all over her, and practically passing out from how totally amazing and awesome it all is. He pulls away to catch his breath.

Jesse (breathless): My place is just around the corner.

Jesse: There’s a dude out there who I don’t really want to be talking to anymore.

Jesse looks at her incredulously, then shrugs his shoulders and jumps onto her back. Dash flies out the nearest window and takes them right to Jesse’s house where they make sweet sweaty love.

Rainbow Dash: … and that’s why we’re looking for the Blue Crystal.

Jesse: Is that what this is about? You just want me to cook for you?

Jesse: You come up here acting like you care about me, making me fall for you, and then happen to mention that you’re looking for the Blue? You’re just like every beautiful woman: a user.

Rainbow Dash: You know where to find the Blue Crystal?

Jesse: Don’t give me that shit. Of course I do. What am I, some stupid freshman you get to do your math homework for you, just because I think you might one day show me your tits?

Rainbow Dash: Of course not, Jesse. First of all, you’ve definitely seen my tits already, and from a lot of different angles. And I had no idea that you knew about the Blue Crystal. I was just drawn to you and couldn’t resist your soulful charm.

Jesse: Yeah, but I’m not like a typical “hottie.”

Rainbow Dash: Exactly! You’re different from all those brain dead jocks. Special. You’re so skinny and young looking, with those delicate hands, and that smooth, hairless chest. And I can tell you’ve got a sweet and loyal heart.

Jesse: I guess. So what’s wrong with this friend of yours?

Rainbow Dash: Her magic, she can’t find her magic. Ever since she turned into an Alicorn (Season 3, Episode 13 “Magical Mystery Cure”) her power’s been draining.

Rainbow Dash: No, an Alicorn.

Rainbow Dash: There’s a Wiki site, with over 700 pages maintained by a small group of really loyal, diehard fans if you want to look it up.

At this point, Jesse and Rainbow Dash have sex again, a few more times, in really slow and sexy ways, with lots of close up camera shots, and soft focus on their eyes meeting and locking for deep soulful moments as if they’re truly seeing each other and connecting on some deep and profound level.

Jesse: So, yeah, I can get you some of the Blue Crystal.

Rainbow Dash: The one that cured White Stallion?!

Jesse: You mean Mr. White? Yeah, that’s the shit. But he don’t take it himself.

Rainbow Dash: So how did he get his Sparkle back?

Jesse: Well, we sold that shit, made a lot of money, and I think Mr. White paid for a bunch of chemo or whatever with it, and now he’s better. I wouldn’t say he “sparkles” though.

Jesse: Well, I mean, smoke a little and you will definitely feel the sparkle, or whatever. But no, yo. Long term, you gotta keep clean, get the money.

Jesse: I don’t know, potion or whatever.

Rainbow Dash: OH! A potion to bring Twilight’s Sparkle back!

Jesse: Sure. Yeah. That.

And so Jesse and Rainbow Dash did it three more times in a variety of positions that could only be accomplished with a Pegasus for a lover, and Rainbow Dash was totally satisfied and fulfilled, and head over hoofs in love with Jesse, so much so that she promised to come back as soon as Twilight Sparkle was herself again so she and Jesse could keep doing it all the time and discover all the different and incredible ways that a young man could make love to an attractive and punky cartoon Pony™.

She went back to the diner and got Fluttershy who wasn’t even pissed about getting left there for six hours because her Element of Harmony is Kindness, and together they flew across the Salted Sea and over the Magic Mountains to bring the Blue Crystal back to Equestria where they traded it to an old wizard/hobo for some “potion” which fully cured Twilight Sparkle.

Everyone cheered, and Twilight insisted on going back to Albuquerque with Rainbow Dash to thank Jesse for herself, which turned into just the kind of wild and sensuous Pony™ ménage a trois that you would imagine, with neither Pony™ getting jealous of the other, and both of them just worshipping Jesse’s body and bringing him to climax over and over and over again.

Mika Taylor lives in Willimantic, CT (aka Romantic Willimantic, aka Heroin Town USA, aka Thread City, aka Vulture Town) with her writer husband, PR Griffis, and Petunia von Scampers, their crime-solving dog. Her stories have appeared or forthcoming in The Southern Review, The Kenyon Review, Black Warrior Review and Diagram.