MY JUNKIE DREAMS NEVER END IN SHOOTING UP 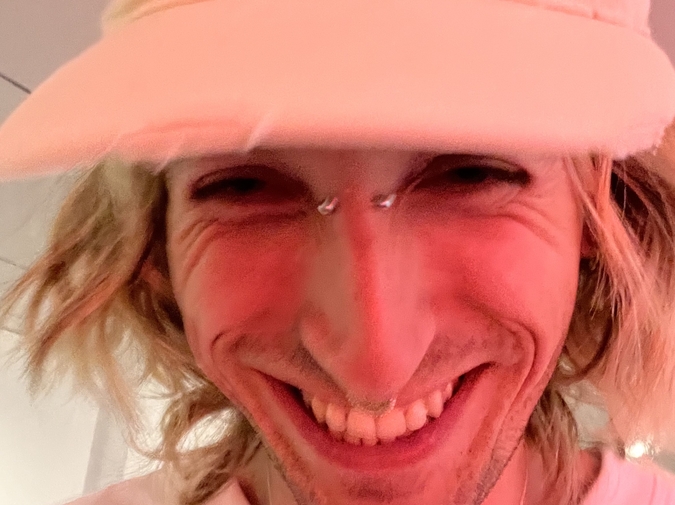 Only once have I ever gotten high in a dream and I mean high high, the real deal, the rush and all.

It’s a clean junkie’s mystery, a rare and sacred event: the occurrence of the one and only using dream that ends in getting high.

I have no idea where I am: the only concerns with setting are my body and the paraphernalia. Even the “I”  is nearly absent, melting away.

I heat the spoon: the heroin cooking smells like honey and vinegar.

I insert the cotton filter and aspirate the dope: be gentle with a needle.

I tie off: it’s the black leather belt with the bite marks.

I flick my main vein: the big one, center stage and below the bicep.

It registers: I’m in the vein; I see the blood flower give birth into the plunger and it arouses me more than anything in my entire life.

I shoot up and away I go.

It’s weird, falling into the deep sleep of an opioid dream within a dream.

When I wake up, I smile, feel refreshed.

It’s one of the best sleeps of my life.

It’s an intricate puzzle of how to fix that keeps changing as I solve it.

Can you help me fix? I say to a sexy drifter with a needle in her arm.

She says stuff back to me that sounds meaningful.

It doesn’t make sense but I go along with it.

Meaning and nonsense are quite related.

It’s a long list of what I need to do in order to score.

And it just keeps going.

I do everything she says, but I’m getting restless.

Eventually, I give up.

But I need my holes filled, I need to fill my holes.

Do you want to fuck, I ask her.

Without hesitating, she takes off her clothes and turns from this sexy drifter into an image of end stage addiction: skin covered in dirt, toothless, nails like Scissorhands.

Question: what’s worse than a dream that doesn’t end in shooting up?

Answer: a dream that involves being in opioid withdrawal.

The sensation is less intense, of course. Like a car left running, but I’m not inside it. It’s still there, puffing gas out of the exhaust pipe, motionless.

In the dream, I’m with an old drug dealer and we are talking the talk and I’m sick and nothing much else happens.

Junkies are in and out of his apartment copping but not me, I’m just sitting there, stuck in my head, suspended in time.

There are thoughts: a rat in a cage, the wheel is spinning, but I’m just sitting on his emerald velvet sofa, sick.

In reality, no junkie is ever just hanging out with their drug dealer without being high.

I wake up glad to not be strung out.

I wonder how my drug dealers are doing.

I’m strung out with my junkie ex-girlfriend, Haley.

We are in my apartment.

There is a conversation but it is inaudible to me.

Like that, we are somewhere else that we used to get high.

The setting keeps changing: apartments to hostels to motel rooms to homeless shelters.

It’s the same thing: a conversation that goes nowhere.

I keep thinking that there has to be a way out of here, but I don’t know that I’m dreaming.

I do know that I’m strung-out.

We aren’t sick, but we are just there, occupying space, and not getting high.

Needles are all around us: the coffee table, the floor, my jean pockets, in the Sharps container.

But I can’t grab them, they are formless like water and adapt to my hand, becoming it.

Baggies of dope are on the table but for some reason, shooting up isn’t our concern.

There’s a sense of impending doom.

I wake up wishing that I got high.

There’s no point in being strung out if I can’t get high.

That is quite literally the point.

Side note: a point is slang for a syringe.

I wish I could point myself in the right direction.

A long one, trippy and awful.

My memory of the dream is vivid, filmy.

I’m in a half-way house in the middle of summer.

It’s the same half-way house that I stayed in years ago, but somehow, I’m back here.

The city is on fire, but even in its hellish conflagration, everything appears normal, business as usual.

I want to wake up.

The rain isn’t putting out the fire.

There’s a surge and like that, I’m somewhere else.

A cop is arresting me for what I assume are crimes I committed in order to score, but I never make it to prison because I’m getting clean and getting clean isn’t allowed.

Prison is for the good boys, the cop says, brushing donut crumbs from his mustache.

He takes me back to the half-way house and oinks while he does it: red and blue flashing lights blend well with the infernal landscape.

This one tried to make a run for it, the cop tells the half-way house manager.

All the cops and all the d-boys are on the half-way house’s payroll, providing their services, making sure that all aspiring sobriety is high and incoherent.

The half-way house is a part of a hospital that treats addiction.

The hospital is only a few blocks away.

The cop handcuffs me to my bedpost until morning.

Eventually, he’ll give in, the half-way house manager says.

This is the truth.

The d-boys are coming for me: they stand outside my half-way house apartment door, and they drive past me when I smoke cigarettes on the balcony blaring their music, catcalling me, and they block the entrances to all of the support groups, charging a fee to enter.

I’m not allowed to leave.

Don’t you want to get high, they say, like it’s not even a question.

Doctor, the d-boys are coming for me, I say to my doctor at the partial hospitalization program.

His nose is long and flushed red with noticeable black hairs sticking out in every direction.

Sure, sure, he responds.

He looks at his chart, mumbles to himself.

Doctor, I shit you not, the d-boys are coming for me! I say again with even more urgency.

Well, let them come, he says smiling and slightly in a daze.

I am driven to the hospital everyday by the half-way house workers and I stay here from 9 AM until 3 PM.

The hospital is a horrible place: the doctor’s inject themselves with barbiturates and play duck duck goose but all wobbly-like while we are tied down and forced to watch movies about drugs: Candy and Trainspotting and Requiem for a Dream.

If they are triggered, they won’t last long, the doctor says.

I return to the half-way house and outside my door is a d-boy dressed like a Power Ranger.

This isn’t real, I tell myself.

The sample is real; I can feel it in my hand.

It has the words Comatose stamped on it underneath an image of Snoopy but all fucked up and dreaming.

Why isn’t getting clean allowed?

And they are killing us!

It doesn’t seem possible, but I swear to you, it’s happening: I’m tapping my slippers but I’m not waking up, and by this point, my slippers are checkered black and white Vans.

And when they can’t run, they relapse.

And the night before they relapse, they set fire to alcohol.

And after they set fire to alcohol, they throw it into the half-way house’s windows.

And after they throw it into the half-way house’s windows, everyone takes the plunge and walks right in.

Away we go, they say.

Off to the races.

Getting high, getting low.

This is why the city is on fire.

It happens every single night.

I have to leave.

I have to stay clean.

A woman appears out of thin air like the DeLorean from Back to the Future.

She waves me over.

I get in her car.

And they chase me, so I hide harder.

I’m homeless for months, in and out of the alleys and tunnels and bridges and traphouses and whorehouses and cheap motels where everyone is shooting dope but me, no I’m clean and it’s this way for months!

There is a hit out on my life: the half-way house and the d-boys and the cops and the hospital, they want me dead for getting clean.

They patrol the neighborhoods and flash their lights and blow their whistles and laugh this awful laugh.

Getting clean is not allowed! they say.

I have to get out of town.

I do a lot of networking, junkie business without using the junk and it’s awful.

Finally, I meet the right stranger.

I’ll rescue you, you little princess, he says.

I’m fine with being called a princess, but I’m just hoping he isn’t expecting any sexual favors in return.

At all of the checkpoints located across the city, the cops and the d-boys and the half-way house workers inspect the car.

Fuck, I’m muttering beneath my breath.

I feel my chest inside my belly like a pounding war drum with fish swimming in it.

I hide in the stranger’s backseat at every checkpoint with a blanket tossed over me.

At every checkpoint, they wave us through.

I’m going to make it, I think, but I can’t be hopeful in a time like this.

I’m going to meet my family and friends, I tell the stranger once we are passed all of the checkpoints, having crossed the border into some other country that I once knew but is now unfamiliar.

He never tells me his name.

He has a Dalmatian named Otto that jumps up and licks me before I leave.

He drops me off at the pick-up point where my parents told me they would be.

I stand there on the side of the road with all of the blowing tumbleweeds.

His car drives off and I notice the little dents everywhere from all of the hailing little baggies of dope.

I briefly reflect on what was a stranger’s act of kindness.

They’ll be here, I know they will, they said they would come.

And when I spot my dad’s little beater in the far off distance, I think, I knew it, and I feel an overwhelming sense of relief.

Everything has gone according to plan.

I run to my mom, and jump like Otto to give her a hug, but my mom is reserved, her hug is detached, in a way, hugless.

Why!? My mom screams and slaps me.

Mascara drips from her face.

Why was I gone for all of these months?

They had no idea what had happened to me.

I got clean, I tell them.

That’s not what the half-way house says, my dad responds, they told us that you ran away.

His demeanor is dismissive and I feel like Otto getting his face shoved in shit.

No, no! I got clean, I plead, on my knees, pulling on their shirts, and it feels like they are floating up, up and away like balloons.

They don’t believe me.

You’re a liar, they say.

I wake up in the morgue.

And then I wake up in my bed, and sometimes, this is exactly how life feels.

Christian Bodney lives in Brooklyn, NY. He/they is an MFA candidate at New York University. He is currently working on a hybrid collection of linked essays/memoirs.