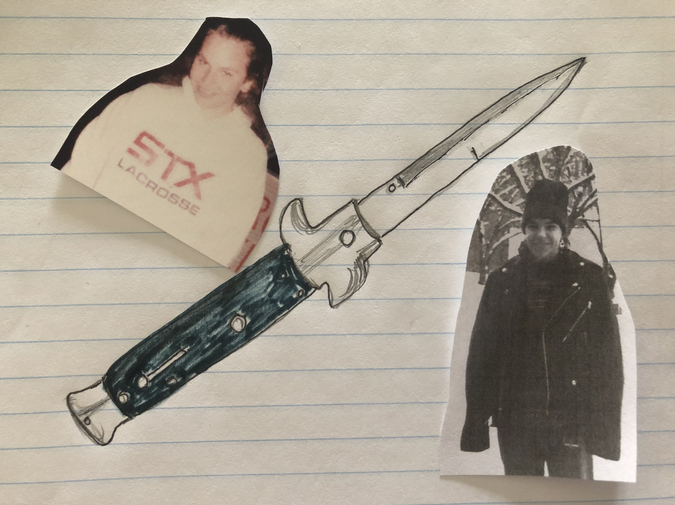 My first boyfriend collected knives. He was the kind of boy who listened to Metallica and Ozzy Osbourne, who liked to draw superheroes and werewolves, and was drawn to darkness and violence with the fascination of one whose life was as yet unmarked by it. He wore black t-shirts and cargo shorts with an asthma inhaler tucked in the pocket. He had braces and a wrestler’s muscles and long eyelashes. He was impossibly beautiful and inexplicably in love with me.

He was so young. We both were – 14 and 15 years old – but I already had the world-weariness of someone who had seen too much. I was boiling over with a toxic blend of rage and hopelessness. I was marred by wounds that were still tender and raw. The world had treated me roughly, and sometimes I flinched at the slightest touch. He had seen nothing, done nothing, and was hungry for all of it. He was infinitely patient with my flinching. I learned to find joy in the feel of my own skin under his gentle touch.

Very quickly, we became so close, we could barely find the boundary between us. Our hunger for one another was obsessive and intoxicating. Our parents frowned. They set limits, tried to keep us apart, talked about “balance” and “healthy” and “finding time for other interests.” We ignored them. Instead, we climbed out of windows and spent late-night hours curled into the back of his family’s Volvo, the glider on my porch, the bottom bunk of his bed. Together, we explored a universe of firsts.

He had a trunk in his room, an old footlocker like kids used to take to camp, or the army. Hidden under stacks of drawings and cello recital programs and souvenir t-shirts were his collection of knives. A butterfly knife, a stiletto, a switchblade. One by one, he placed them in my hands, like he was bestowing something holy upon me. I marveled at the weight of them, the solidity of these terrifying things. These were nothing like the knives in my mother’s kitchen. These had been crafted for violence, for harm, for fear. My skin tingled from the cold of them.

“Do you want to borrow one?”

I chose the switchblade. He showed me how to slip off the safety and press the latch. I felt the blade spring to life in my hands. This slender thing held so much power, I could almost feel it buzzing in my hand. I closed it by pressing the dull side against the thigh of my jeans, and it was inert again, harnessed. But at any moment, I could press the latch again and feel it come to life. I could transform it from an ordinary object – a comb, a key, a stick of gum – into an instrument of violence. I held this power.

I slipped it into my pocket. It was a secret, hidden, a weapon I wielded unseen. I moved through the world feeling changed. I wondered if strangers on the street noticed. Did they know I was carrying this thing with me? My blood was charged. I felt like I was wearing invisible combat boots. The knife in my pocket made me feel like a character in a movie, the kind of person who leaves a wake, the kind of person others make way for.

Of course, this particular knife was illegal. Or so we believed anyway. This was before the internet, when urban legends were whispered between kids with no way to verify them. The very word switchblade rang with menace and transgression. I felt like I had gained access to a forbidden kingdom.

I sought out places that used to scare me – dimly-lit parking lots, alleys, crowded subway trains. I made eye contact with the creepy older men on the bus. Instead of trying to dissolve into the vinyl seat, I stared back with defiance. They looked away, embarrassed and confused. I put my hand on my pocket, feeling the shape of the knife through the fabric of my jeans.

I never imagined using the knife. I could not envision actually pressing that little button, brandishing the unsheathed blade at anyone. That moment of potential confrontation didn’t seem connected to the power I felt while carrying it, not in any literal way. But with it tucked in my pocket, I was taller, my muscles more alert, my senses heightened. I was a person not to be fucked with.

Later, I found other ways to protect myself. I developed other kinds of armor to wrap around my tender and vulnerable center. I wore actual combat boots, a motorcycle jacket – the costume of a confident and invulnerable person. My wounds healed over, covered by thick, rough scars. I learned how to turn my pain inside out, to use it to my own ends. But I didn’t have those tools when I was 14, 15.

What I had was a switchblade in my pocket, given to me by a boy who loved me and wished to shelter me from harm. It was a weapon I never used, its force harnessed and controlled within its sheath. But until I grew strong enough to protect myself on my own, I borrowed its power. For a time, the switchblade made me feel larger than I was, allowed me to take up space I wouldn’t have dared to otherwise.

That switchblade is still the only weapon I’ve ever carried. But I remember vividly its shape and heft, the satisfying click of the latch when I pressed the button and the blade came to life in my hands. Sometimes, it feels like I’m still carrying it.

Laura Todd Carns was raised in Washington, DC and Gaborone, Botswana. She spent her formative years channeling Harriet the Spy, and still finds herself compulsively scribbling in notebooks. Her work has appeared in The Washington Post, Electric Literature, Quartz, Pigeon Pages, and Medium. Find her on Twitter @lauratoddcarns.