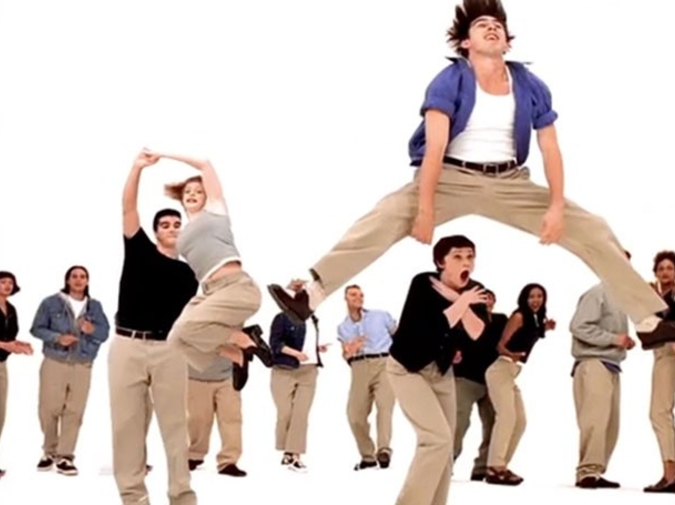 One day at Old Navy in 1998 I was trying on a yellow long-sleeve with a tiny embroidered sun on the chest and my dad said, in front of the whole dressing room, that maybe it was time I should think about wearing a bra, and I don’t know why he said it instead of my mom, and I don’t know why anyone had to say it at all actually, especially in a room full of strangers, and I don’t know why we were all at Old Navy as a family, trying on clothes, which is something I think only happened that one time. The edges of the memory bleed, fuzz out, but not that shirt, not the thin, ribbed René Rofé training bra my mom got me at Bradlees soon after. But this isn’t about getting boobs. Although, maybe it kind of is. Some of it’s about two stores owned by the same company, about the chasm, economically at least, between Old Navy, where you could outfit your whole family for a pretty reasonable price, and the Gap, where you couldn’t, or rather where we couldn’t, and where they had that swing commercial.

Okay, maybe it’s mainly about that swing commercial. Or maybe it’s about Now That’s What I Call Music! (v.1), which was technically the first CD of current pop music I ever owned. I played NOW! constantly, since it was exactly like listening to the radio but with a playback option and without commercials. My sisters and the one solid friend I had tried swing dancing in my living room to “Zoot Suit Riot,” accidentally kicking the coffee table, getting rug-burned knees from our blue carpet.

Or maybe this is about that sunny yellow long-sleeve that I got anyway, and my favorite purple corduroy overalls, and even the bright orange Performance Fleece I wore every day over my Catholic school uniform. There was all that stuff, kids’ stuff, which I loved, but then I got invited to my first girl/boy party. And parties were pretty much the only opportunity to wear something other than a uniform in front of the kids in school. And there was that Gap swing commercial. There was Brian Setzer crooning, everyone jumping and jiving and wailing, cool girls and cool boys touching, moving, then frozen as the camera zoomed around, a slight exposure of skin, of bellybutton, and the Cherry Poppin’ Daddies were playing off that NOW! CD, and they were called what they were called, and I was a few months away from getting my first period, and I was watching MTV more and more, and over and over, all the replays and reruns of the VMAs and the Real World marathons, and God, mom, can we please just go to the Gap?

And somehow, she took me: another fuzzed-out memory, devoid of the begging I must’ve done. My little sisters ran in and out of the circular clearance racks in the back, hiding, jostling jeans. I did my best among the racks, tried to capture a look I’d perfected in my head. The shirt I picked, in a muted version of that gorgeous ’98 lime green I loved, the green of my dream car (’98 VW Bug obviously), the green of my inflatable chair, was a size 14 boys. The khakis didn’t fit exactly right, but it was fine. More than fine. I had them. I had GAP KHAKIS. I was halfway to the Drew Barrymore/Gwen Stefani hybrid image of my dreams; a few more years, I thought, and I’ll work at the Coffee Beanery at the mall. Maybe I’d even save for some mocha lipstick.

At the party, I wore the polo and khakis with white sneakers. Like just my sneakers I used for everything. The sneakers I climbed trees with. I looked bad—I felt it as soon as I walked in. I looked baggy and wrong and I never had the hair I wanted. It was as if no one else had heard of the Swing Revival. It was as if no one else watched TV until they had a headache. It was as if they spent all that time with each other, talking, shopping, cutting in baby bangs. And worst of all, that one good friend, the friend I’d tried Lindy hopping or whatever with in my living room—she wasn’t even there. What had I done? What had I misunderstood?

The basement was dimly lit. The girls moved as one shiny, tight-jeaned mass, like a handful of silver minnows lifted from a lake, and I felt like a hanger-on, lucky to even be there. The basement had doors that opened to a patio. The boys didn’t yet know they were supposed to be in the basement, too, nervously asking girls to dance to slow songs from a boombox, so instead, they were outside, tossing a ball around, yelling, whooping. Inside, the girls forced Cassie, the new girl at our school, whose clothes fit right, who knew what to do with her boobs, to call the new boy at school who wasn’t at the party. The girls were trying to pair everyone up. I pulled on my orange Performance Fleece, sat at the picnic table outside.

So maybe this is about that, some other, non-retail-based chasm. And maybe I’m saying all of this, trying to lay out meaning instead of letting it blur, letting it get murky, because as a pre-teen I couldn’t see the signs, couldn’t interpret. I’m still not good at it. This is about the first time I felt like I was about to get something right, like dead right, but was so painfully off; about how all the possibilities in the universe seemed to hang within reach, twinkling, beckoning, like the string of lights I imagined twisted around the headboard of one of those Coffee Beanery girls. And instead, there I was, dirty-sneakered, dimly-lit, sliding squeaking hangers on a clearance rack.

Emily Costa teaches freshmen at Southern Connecticut State University, where she received her MFA. Her writing can be found in Barrelhouse, The RS 500, McSweeney’s Internet Tendency, Memoir Mixtapes, and elsewhere. You can follow her on twitter @emilylauracosta.