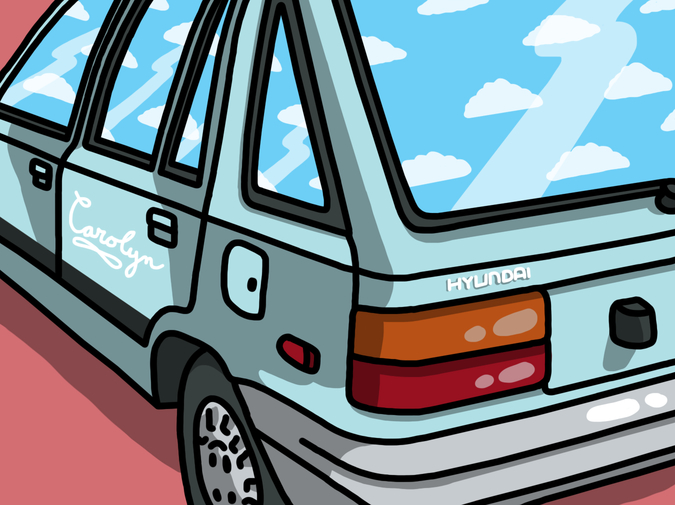 That first year of having her, I would drive by myself, just to feel that relief of no anxiety. I felt tense even around my friends not because I didn't want to be around them, but because I needed a break. A valve to let out exhaust. How could I learn who I was if I never spent quality time with myself?

I drove down roads, the scenery changing from playground to strip mall to undeveloped lots to farm stands to train trestles painted high school colors to a statue of a bull named Whisper. The stretches between towns, you could go as fast as you wanted. The wind made the car shake and whistle through the crack where the window wouldn't go quite all the way up. The car was so light, I had to hold on tight to the wheel so the wind wouldn’t push us into oncoming lanes.

I can tell you the stories of what I did in that car. All the typical things that make up the myth of middle-class suburban kid culture at the end of the century.

Driving friends three towns over to the gas station that sold 40s and didn't ask for ID.

The long line of us idling in the Taco Bell drive thru with only fifty minutes for lunch period and in the hurry to get back to class, stomping on sauce packets under the brake pedal.

The time my friend and I drove out to the Hamptons to see a Lemonheads concert and the lead singer wound up platonically sitting in the back seat with me, smoking and drinking coffee while I pathetically wore his face on my oversized t-shirt.

I could even go back in time and tell the stories of the previous owner, my uncle’s girlfriend, Carolyn. How she kept it vacuumed and waxed for her kick line friends. How they blasted power ballads on the Hair Metal station. Europe’s Carrie preferred over The Final Countdown. They flicked on mascara in the rear views and pulled out the biggest cans of hairspray they could safely shoplift from Woolworth’s. How she’d had the driver’s side door detailed with her name, Carolyn, stenciled in a white Carrie Bradshaw nameplate-necklace kind of font.

All that happened and maybe similar happened to you or to the people you know. Maybe you’ve seen these antics in a hundred different movies. That's not what this is about.

I didn't have my own bedroom until Senior year. My life up until then was spent sharing a room with my mother, experimenting with under-dining-room-table forts, and waiting until everyone else went to bed so I could have the couch. All I wanted was a place to let my guard down, not feel watched. A trunk to put a diary no one would snoop through.

Carolyn, with her four doors, let me shut out everything else around me. I didn't even care you could see through the windows, it still felt private. The air inside—fresh scented pine from tree-shaped air fresheners—was easier to breathe because I was the only one breathing it.

Alone, the car vibrating around me, I played my cassettes. Audio of things I’d held my recorder up to the television to capture. Sandra Bernhard on David Letterman, her saying Daaaaave in mock flirtatiousness and him sounding all squirmy about it. MTV News segments of Kurt Loder interviewing Madonna while she sipped tea (you could hear the slurps). A Def Leppard song I could never find on any album but whose video was sometimes on Headbangers Ball. My car was just a car, no magic or weirdly scientific things about it. But it did churn out a less imperfect version of me.

Sometimes I just listened to nothing.

Melissa Ragsly's work has appeared or forthcoming in Best American Nonrequired Reading, Best Short Fictions, Iowa Review, Epiphany, Hobart, Joyland and other journals. She is an Associate Editor for A Public Space and a Program Coordinator at the Authors Guild. More can be found at melissaragsly.com.

Robert James Russell is the author of the novellas Mesilla (Dock Street Press) and Sea of Trees (Winter Goose Publishing). He is a founding editor of the literary journals Midwestern Gothic and CHEAP POP. You can find his illustrations and writing at robertjamesrussell.com, or on Twitter/Instagram at @robhollywood.