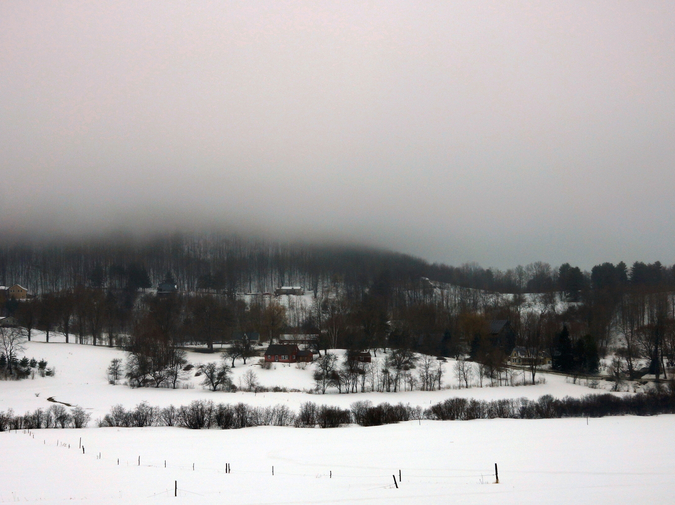 My father bottles howls. Meaning that--on the briskest of days--he wanders through a temple of waterlogged firewood, over knee-deep mounds of snow like the turned-away backs of blanketed sleeping children, and listens. On these days he carries a leather bandolier modified to transport small glass jars. When he finds an appropriate spot of listening, he squats--anxious but steady--and removes the lid of a single jar. He sets the topless thing before himself with the ritual of sacrament and the weakness of hunger. There is a long moment when the winter struggles to solve itself--the air is striated into layers of cold like sediment, the sky becomes a fogged-breath window to somewhere else, the man himself becomes a thumb of rust and dirt--and in this moment, on the best of nights, a howl rips through the woods and spoons a shudder out of the trees like they've been holding their breaths for the season and have finally been given permission to give up the ghost. On these nights my father bottles the howl and places it like an infant back into the bandolier. The howl is brought then, to the house and labeled accordingly. These bottled howls are stored in a room I have only seen twice, as is customary: a small cylinder of shelves tucked to the back of the house. Howls are made for the men of their time and my friend, there are howls in this house that could drive you mad. How do you destroy a past-howl? Glass jars of sounds so abrupt they would ruin you? To shatter the glass would bring the same end as releasing the seal. So they are stored, the howls of my father and my father's father and on, in a place where they might not be broken, until they are passed to me. On the nights my father brings home a new howl my mother prepares a feast and adorns a whalebone corset like a rib carved from the moon. On these nights I love my family because we are together and in this way I have come to worship the wolf.

Once a king was asked: What is that lamp which lights up men, but flame engulfs it, and wolves grasp after it always? He knew the riddle--She lights up every land and shines over all men, the sun, the sun--he said it, even as he went mad. It is under this sun, on an early morning, that I began carving my totem. I roughed out the mountains first, using hammer and file. Carved into the face of wood a haggle of stickwork, a stairway of pointed arrows jogging up spent orchid facades, each filigree of wood entablature, rebate, a vocabulary of ritual. The afternoon announced itself with the heat of memory, long summers spent searching for ghosts amid the alien corn, woods half on fire with drought. I brought this fire to the wood, too, and showed it the sun-blown apple trees, trunks of black pitch, petals wrought from white-hot iron bars, greasy broth clouds, Mother calling from the porch--voice like a coat of paint. In the low light of evening, I whispered to the half-totem, told it stories of my first howl collecting, how father and I had returned that night and molted our day clothes, two storms of dark blue staggering under the lightning, confusing the Morse code syntax of lightning bugs for constellations skewed from native order. As the sun set, the thing before me condensed itself into a mournful gloom, brooding motionless, a knuckle of sinew and shadow, and when I stepped back, work on the wood complete, I had before me created something like a wolf. I gave its gaping jaws shattered glass for teeth, swept into piles from broken howl-jars. It was finished with my mother’s ancient whalebone corsets for eyes, staring out at the night before us like two white corrupted balls of milky curd. Blasphemy, my father said, when I showed him, and he meant it. He could not conceive of an instrument being necessary for creating the music he loved. And so it was placed away from the house and set--swaying and wheezing, in a thick murky puddle, losing itself to mute philosophy.

The bird collectors attacked on the third Wednesday in March. Armored in layers of winged skeletons and feathered headdresses, they crawled up the hill, flicking shadows that shifted and slinked like the husks of cats across our scars of red poppies, bringing with them the faint smell of rot like carrion wind. They came armed with talon-stitched gloves to claw and slice and garrotes fashioned from lengths of old telephone wires.  My father holed up with his howls and sobbed through the door. They’ll take it all, he said. We have no way to fight back. He was of a place where the small things devoured larger things and the life he’d led had been an unlovely one. He’d slept through February in a single bed, creaky, uncomfortable as sin, the full moon torn by fog like an evening gown, sometimes waking to watch painted bugs carve arches of light through the keen-edged, approximate blackness of night. And on these drowned-washrag nights my mother had sat in the dark with me and tested the blindness of our faces. From this perspective, I saw in our nemesis an appetite for dominion that stemmed from the same appetite within me--that I would not sacrifice this house--and transgression and retribution began to appear equally savage in my mind. An idea struck me at once that we might still defend ourselves and this house and with this I kicked down the door to my father and carried off a bandolier of my his loudest howls to the swallowing swamps to unmask my wolf.

I heaved the first jar like a grenade and it rang off the nose of my totem with a guttural roar. The bird collectors shrieked and halted. I threw another, a deep purple crease of a howl, and heard the hope of my father’s voice rise above the clacking and cawing. They cannot stand the howls, he said. I became an organism of wild destruction, smashing howl after howl on our wolf. My father came charging out of the house with a rattling basket of jars, my mother behind him. Together we all danced and yipped and roared around the great statue like a maypole, pelting it with jar after jar of moonlit verse. The bird collectors tried for a final push but couldn’t fight through our laughter and the growling cacophony. Their circle widened then collapsed and throttled cries rolled out from the cloud. They spun and cartwheeled in the dirt, advanced, retreated whimpering, cocked their heads, then crawled along dragging crippled arms leaking rust. A weak chittering deepened in the yard where the finches were bribing bugs out of the steppe grass. Our enemies caught blipped visions of the barn. A strip of ocher bound the distant oaks. The musky horns of fluted daffodils fizzed with bloom. Something like a deer breasted a varnished slope. They made it to the edge of the cattle pond, the shore curving away from them like a rough parenthesis. Crooked fronds muzzled the shallows of the pond—the water sullen, pocked, and greasy. Now in their mouths the taste of salt like an old, oceanic nightmare. Struck dumb on unforgiving shores, they collapsed amid the garbage with our sows, barbwire posts crooking fingerlike out of the ground, askew as the morning broke up and shuddered to the bank. There would be celebrating through the week for the great valiances of the wolf, but this night we sunk into the wound of sleep early, there in old beds, against trophy-adorned walls of deer antlers and the swords of swordfish--blunted and bony, a curdlike gray, stuck in a half-twisted homage to the thrash and curl of battles underwater. In the morning we would wake and take quavers from the rage of sunset, stoic and placid as dawn’s necessary facade on this reborn phoenix of a house.

Drew Knapp is a writer based out of Washington, DC. He was nominated for a 2015 Pushcart Prize by The Citron Review and has other fiction published in Eunoia, Maudlin House, and elsewhere. He can be reached on twitter @tha_god_thoth.