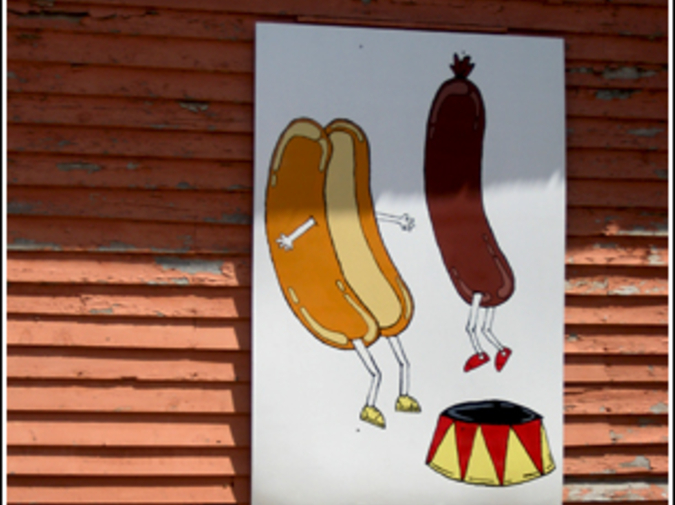 Those days I believed in Body over Mind. I believed Mind followed Body because I knew matter could think. I was a cook in this little hotel/restaurant in Missoula, Montana. The manager put me up in a room till I could find my own place. I had stopped in Missoula, a mill town on I-90, to wash the road off, eat, conk flat out on a bed. I had a couple hundred to get me to the coast but when I saw the hand-written sign for a cook, five bucks per with room and board, I figured I'd work for a while, see what I could pocket. The place—a counter and tables—six rooms upstairs—was open at six am and closed down after dinner at night. They had a chef for lunch and dinner; they wanted me to do breakfast and prep.

The manager, Mike, showed me the set-up, my room, told me what my hours and duties were. I could see he lifted weights and must've played football because his body was a series of blocks set atop one another and the top block was his head. His square face had a soft look to it though, no scars on his skin, but a broken nose probably from ball, and though he was young, his hair was thin on top. He shook my hand and his fingers were limp. I knew I could work with him. He told me he split time with his wife who played hostess.

Working the grill for breakfast is a piece of cake—eggs, bacon, ham, potatoes you par-boil, fry and pile in a corner. There are two drawbacks to fryin—heat and grease. The heat comes from the grill and the busier it is, the hotter it gets. The grease comes from the bacon and ham and sausage and the oil you put on the grill and scrape off whenever you can with the spatula. Trouble is, it gets busy and hot, you forget to clean the grill and the grease starts poppin' till your wiping it off your brow and into your hair. It forms a sheen on your face and fills your pores so your skin can't breathe and hope gets locked in your body.

Sharon, the wife, was on in the mornings with me. When I first saw her I didn't think much—she seemed a little overweight, kind of plain looking, cat green eyes set too close together. I was relieved because I have this problem with women where I get between them and their men. I swear I don't know what it is. Well, what it is, I guess I like the action. I like to magnify the conflict and watch the drama because otherwise it's a goddamn bore. Life, I mean. So I was relieved, sort of—she was not my type. But then, the days went by, soon it was October when the sky turns to slate in Montana and drops down on your shoulders. The sameness of the days made me notice little things, like she was working herself for me, turning herself out—heels in the morning—skirts with buttons she would undo up to the thigh, see-through blouses, plenty of make-up and lipstick caked like blood, hair pulled away from her face. I began to see she was hotter than I first thought.

One afternoon she knocks on my door, foxy in her slit skirt. I'm out of the shower on my way to take my nap—towel round my waist. She tells me she has fresh linens for me—holds the sheets to her breasts. She squeezes past me into my room and drops them on the bed. So when she turns around, I do what she wants—pull her to me, kiss her like it matters. She backs me right into the bathroom beside my bed. I'm a little confused, but I pull her skirt up anyway and lift her up on the edge of the sink. She pulls her panties to one side with one hand and reaches for me with the other—yanks off the towel and pulls me to her by my dick. She's ready and wet. "Give it to me, Roy, fuck me," she says and I lift her off the sink and hold her, big as she is, just the way I like them. She is full of filthy talk. I fuck her till I come and remain hard; she comes and I come again. And for that brief moment we erase that gray Montana sky and block the rancid smell of the saw mill and, with the odor of sweat and sex, fade into each other.

Those days I trusted my body to tell me what was right. I believed that words could lie, looks were put on and actions were deceptive. Our bodies, I thought, were all we had. I trusted her smell and the coarse texture of her skin, the blond hair between her legs, the feel of her tongue pushing against mine.

Things went on between me and her for months before Mike finally opened his eyes and smelled the java. I literally had to console the big guy; he wept like a baby in my arms. He told me he didn't deserve her and he just wanted her to be happy. It was pathetic. The next day, Sharon and I took the bus to Seattle.

We rented a house on this island in the Sound —Bainbridge, Island. Both of us worked in a bar in the city. I was a bartender and she was a waitress. We did this for almost a year and for a while, for months, it was good between us —just like it was that first day in my room in Missoula, Montana. But slowly what was between us smeared like lipstick and wore off. She caught me with a waitress in the coat-check room. I caught her with two bartenders in a Cadillac in the parking lot. I pulled one of them out of the car and smashed his head through the side window. The other one popped open the glove compartment, pulled out a long-necked 22 and shot me in the face. Call me lucky, the bullet went through my cheek and tore a hole in my ear.

I remember waking up in the hospital with Sharon holding my hand. We made up and stayed together for about a month, but we were just pretending—it was no good. One day I came home and found a note. She had taken the bus back to Missoula. That's when I began to see I couldn't trust my body any more.

It took many years of bad experiences to change. Now, I put my trust in Mind. I learned to think it through because the body can betray you like a brother.  Though matter can think, we can outthink it. And that's what I aim to tell the parole board next month. And this time, I believe they'll set me free.

Ed Meek has published fiction and poetry in The Paris Review, The North American Review, North Dakota Quarterly, etc. A book of his poems, What We Love, was published last year by Blue Light Press and is available through 1st World Library.