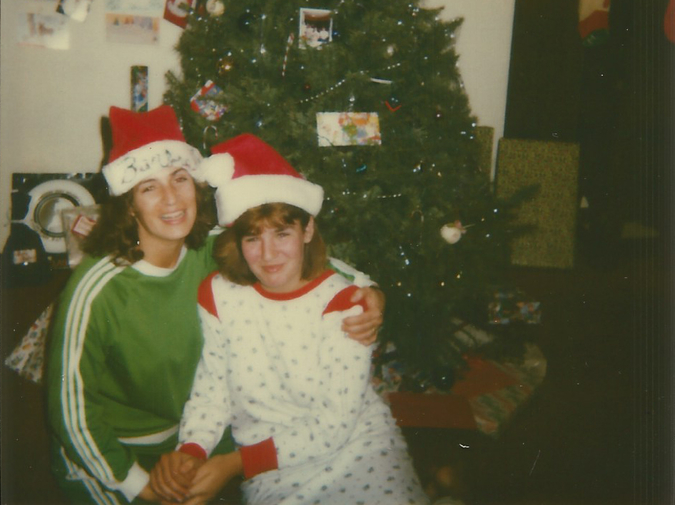 The year before I’d been at a boarding school in Florida; I was fifteen. Mom had said it was my year to get to know my father. My father’s mother had paid the tuition for a boarding school in the same state as my father, instead. I barely saw my father. At Christmas, I flew home to Ohio. My mom’s dad picked me up at the airport. My mom was already in Arizona working construction with her new boyfriend, Mark, who was stocky, had two dimples and a moustache. She’d had three husbands and other boyfriends before him and none of them had ever wanted me gone. At least not that I knew of. Mark had a daughter a couple years younger than me I never met even though he and Mom dated for six years. I didn’t have a phone number or address for my mom the entire year I was at boarding school. She later told she and Mark hadn’t bothered getting a phone and had moved around a lot.

By the time I arrived at the Phoenix airport the next summer I was thirty pounds heavier. I’d spent the previous nine months eating vending machine moonpies and packaged cookies in my dorm room. The more I ate the bigger I got the less I felt like leaving my room. My roommate Casey was thin and rich and beautiful like the women in the Judith Krantz and Jackie Collins novels I read to her at night and I lived for moments alone with her as I’d once lived for moments alone with my mother. (I’d replaced one obsession with another; one mostly-one-sided love affair for another.)

When I got off the plane in Phoenix my mother said, “Well, you’ve gotten fat.” She didn’t seem to notice the blue nail polish on my fingernails or blue lipstick on my lips. I was trying to be new wave. She was dressed in a t-shirt and cut off corduroy shorts that showed off her muscular, athletic body. Her hair was pulled back in a long ponytail and her skin was tan and she was smoking a Virginia Slims Menthol. Mark was waiting in the car smoking a Marlboro. I think my mother was embarrassed I’d put on so much weight even if Mark’s daughter was chubby, too. Mark’s daughter didn’t live with him and so he couldn’t be held responsible.

Our apartment had two bedrooms and two bathrooms and tiny balcony. I had a mattress on the floor of my room and a small brass vanity table and stool Mark had gotten me at a garage sale. It reminded me of furniture I would have picked out for my Barbie house when I was in sixth grade. I had to be careful about not sitting too forcefully on the stool.

Mom and Mark worked nights at a bar where the Hell’s Angels hung out. My mom was only thirty-six. Mark was a couple years younger. I thought of them like that couple in that Eagles’ song. They had one thing in common, they were good in bed. She’d say, Faster, Faster. They got drunk, they had sex, they did crank, they hung out with friends at the bar, they bartended, they got in fights, they resisted arrest, they landed in jail. I sat home in my room playing the poor, pitiful daughter, writing in my journal, writing letters to my family back home in Ohio. The school I attended was right across the street; a big spread out campus more like a university than a high school. I made two friends, Kristen and Leighanne. They were both new, also. We ate lunch together but didn’t hang out much outside of school. I was used to being home alone at night. Back in Ohio, my mother had worked nights bartending, too. I was used to making myself pot pies, mac & cheese, eating off a TV tray in the living room. In Arizona I danced around the empty rooms at night same as I’d done in Ohio only I didn’t have my Thriller album. I didn’t have Stevie Nicks. Mom had sold those and the rest of our albums and our record player. Mark had a cassette player and cassettes of Bob Dylan and Supertramp and Michael McDonald. On Saturdays I rode the bike Mark got me at another garage sale to the library; photocopied pages of old Hollywood fan magazines, articles on Clark Gable and Hedy Lamarr, photos of Marilyn Monroe and Ava Gardner and James Dean. I rode my bike to the mall that had a movie theater; saw White Nights and Pretty in Pink and Hannah and Her Sisters and The Color Purple. Mom and Mark had lived without me for a year and most of the time I tried staying out of their way. Blowin’ and burnin’ blinded by thirst. Or most of the time they stayed out of mine.

At Thanksgiving, though, I remember making two pies with Mark. Or, let me be honest, I don’t remember but I wrote about it in the journal I kept that year. “11/28: Today is Thanksgiving and I had the most delightful time with Mother and Mark. We all made dinner, I made pumpkin pies (2), (well, Mark made 1st to show me how). He even gave me the cutest card! I was so surprised!”

I wish (or maybe I don’t) I’d made more entries in this journal. The entries are sparse but extremely frank and often greatly contradict my memories of that year. For instance, before I found this journal a few years ago, I thought I’d always hated Mark. I told people he was an abusive alcoholic who beat my mom and encouraged her to use corporal punishment on me. I told people that our last Christmas together, two years from the one I’m writing about now, I took a Greyhound from the University of Cincinnati where I was a freshman to Columbus where Mom and Mark were living in another two bedroom apartment. That Christmas Eve, Mark got drunk and called the cops on my mother, my grandmother and me. “These women are harassing me in my own home!” he told them. This was after I’d finally stood up to him for the first time, telling him to take his hands off my mother when finding her pinned under his hand, which was wrapped around her neck, in the hallway. My mother, grandmother and I drove in the snow in the middle of the night to my grandmother’s house an hour north. I remember my mother saying, “Sometimes I just wish he’d get in a car accident and not come home,” and wondering what was so hard about just leaving him (I was only eighteen).

All of that is true, but so, too, are the entries from 1985 that go like this. “12/18: everything is ruined! Mark hates me and with good reason. I love him more than anyone (except my Mom) and I wanted so much to make him love me and think highly of me like his own daughter, and I ended up making him hate me!”

Or, “I ♥︎ Mark, like a dad though, the one I never had. I absolutely dread the day he and Mom breakup, for my selfish reasons, I’ll never see him. :( ”

It made me so uncomfortable the first time I read these entries again. My raw emotions and desperate desires right there on the page. I couldn’t deny them anymore. I couldn’t pretend I’d always hated Mark. That he had no redeeming qualities. That I hadn’t once thought him “funny” and “handsome.” That I hadn’t wanted him to be my dad, even if it makes me feel somewhat physically ill to think so now. Or to think of me as a sixteen year old vulnerable young woman wanting this alcoholic, abusive man to be her father.

What I find most astonishing about all of this, about these journal entries devoted to Mark, is that they contradict my memory of being jealous of him for taking my mother from me. Or maybe they don’t. Maybe I could want desperately for him to be my father while at the same time hate him for how much my mother loved him (leaving so little love for me).

I stare at this photograph he must have taken of us on Christmas morning. Or maybe on Christmas Eve. Both my hands enveloping my mother’s hand. My body pressed so close to hers. I don’t remember what presents I received. Or what presents I gave. I can’t find any photographs from earlier Christmases in which we’re pressed this close together. My year of separation from her must have pushed me physically to her, even if she was still emotionally far from me.

I remember one evening, after this picture was taken, my mother coming home and finding me in my room alone in the dark, crying. “Why are you so weird?” she said. She said something about normal teenagers being out with friends, out doing things. I suppose my self-isolation and melancholy made her feel guilty. And that was probably precisely my point. Or my aim. Even if I wasn’t conscious my motivation at the time (or maybe it was).

The next Christmas I would decorate for her a glass jar onto which I had written with a calligraphy pen, “You and Me Against the World,” a nod to the Helen Reddy song she and I had sung along to in her car when I was five. It’s a song that opens with a small child saying, “Tell me again, Mommy,” and closes with the same child saying, “I love you, Mommy,” and Helen replying, “I love you, too, Baby.”

The very last pages of my journal from this year begin thusly. “June ’86: Mom, when I was away from you for a year I became alone, and learned to suppress my feelings. I became cold. When I went back to Ohio I became the happy, loved, sweet girl I was before. I came to Arizona cold again. I don’t know why exactly. I had missed you so terribly every day that when I came here, I suppose I wanted you to feel cold. I’m terribly ashamed of how I’ve treated you! I’m so afraid if I’m without you this last year I’ll become even colder. Please help me, Mom. I know I’ve been plain awful to you this year and you have no reason to want to help me, but I promise I’ll be the daughter I was two years ago. I’ll be ever truthful, kind, respectful, get good grades, loving, and try to be as generous as I can. I need you. I need to know you still love me, not because I’m your child but because you are proud of the person I am. I know it will take time, but I need you more than ever and hope you will help me this last year. Your daughter, Elizabeth.”

I never showed my mother my journal or this entry. Maybe she will be surprised to know how much I loved her.

Elizabeth Ellen loves unapologetically and hard. She is the founder and editor of Short Flight/Long Drive books.