Manhunt, or Open Relationships Aren't Some Kind of Cakewalk, If That's What You're Thinking, I Mean, Seriously 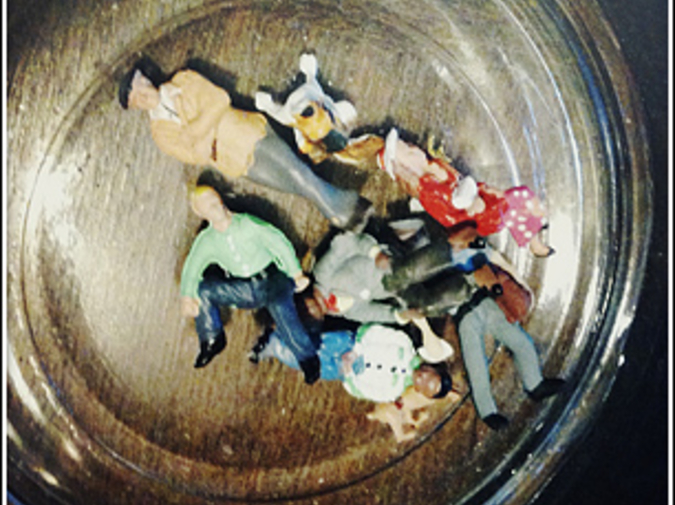 Headline: DON’T SAY MOVIE UNLESS YOU MEAN IT

Profile: Sometimes people invite me to watch a movie when what they really want is sex. This bothers me when the movie is one I actually want to watch. In college, a boy I was sort-of but-not-exactly dating invited me to his dorm room to watch the Alfred Hitchcock film “Rope.” I was excited, because this was one of only a handful of Hitchcock films I still hadn’t seen, and also, I thought maybe Hitchcock could be something we shared. Then later, when people asked us when we knew we were compatible, we’d say, Hitchcock kindled our love. But shortly after putting the tape in the VCR — I am just old enough to have used VCRs in college — my not-exactly-a-boyfriend started nibbling my neck. That’s shit’s distracting. If we’re going to hook up, let’s hook up. If we’re going to watch a movie, let’s watch a fucking movie. What I am trying to say is — this site is designed to facilitate sex. If you want to fuck, just say so. Message me if you like what you see.

Headline: LOOKING FOR OPPOSITE

Profile: Seems like everybody on this site not only possesses an “athletic build,” but also says they’re “looking for same.” I am not looking for same, I am looking for opposite. One of my favorite opposites is the actor Patrick Warburton. He appears on the television sitcom “Rules of Engagement.” I have never watched this series, but I have enjoyed shirtless screen captures of Mr. Warburton on the internet. In these images, he is beefy and hairy. In one, he is wearing shiny red briefs. In another, he opens his bathrobe to reveal his bare chest covered in dollar bills. Given the opportunity, I would enthusiastically remove these dollar bills from Patrick Warburton’s skin with my teeth. Not having seen the episode in its entirety, I do not know why Patrick Warburton attached currency to his chest, but judging from the frequency with which fans post new images, it seems the shows’ writers finds excuses to remove Patrick Warburton’s clothing at least once or twice each season. Perhaps if this practice were more frequent on primetime sitcoms, I would spend more time watching them and less time on YouTube re-watching that scene from Melrose Place where Marcia Cross’s Kimberly, recently back from the dead, removes her wig to reveal a thick, frightful scar extending in a lengthy arc over her ear. All of which is to say — although I am not on this site to find a boyfriend (I’ve already got one of those), I don’t think that means I can’t enjoy my (hopefully opposite-looking) sex partners’ company outside, as well as in the bedroom (which, should we meet at my place, since it’s a studio, will be a figurative term), for instance by watching television together, in order to elevate my comfort level, so I may more effectively release my inhibitions. But be forewarned: I don’t like making out with the television on. Message me if you like what you see.

Headline: DON’T ASK ME WHAT I WANT

Profile: My profile used to read, “I am looking for someone to respect my boundaries while also expanding them.” Whenever I’m messaged, I’m asked, “What are you looking for?” I never have a fucking clue how to answer. Some people wonder, “What, do you want me to read your mind?” Actually, yes. That’s exactly what I want. If I have to tell you, then it isn’t as hot. I’ve thought about responding, “Tell me what you like, and I’ll try it,” but will I? I mean, certain shit I hate. For instance, I don’t love giving head. I don’t think it’s gross or anything, but I feel insecure about my technique and get bored after half-a-minute because that shit’s repetitive. I’m also not the biggest fan of jackhammer-style fucking. And I don’t like guys who remove their hand from my dick immediately after I come — leave that shit there a while, thank you, to accommodate the aftershocks. Message me if you like what you see.

Headline: IS YOUR PIANO GRAND?

Profile: I am a member of the Facebook group “I want to have sex on a grand piano.” I had forgotten this group existed until recently, when, while searching for the event page for the Chicago-based nonfiction reading series the Sunday Night Sex Show, said group appeared in my search pane when I typed the word sex. Other Facebook groups to which I have belonged or currently belong include: “Sex in the Library,” “Sex Outside,” “John Edwards is a Dad I’d Like to Fuck” and “Hi Jeremy Piven... please enter my pants.” Though I’ve yet to bring any of these fantasies to fruition, I remain hopeful members of this website may assist. For instance, we could meet in a minimally-trafficked corner of the DePaul University library. I know several I can recommend. Sex on a grand piano may prove more difficult unless you’re able to provide the requisite equipment. Alternatively, we could break into a place of worship, a collegiate music school, a rehearsal room at the Lyric Opera or similar space. Such outlaw behavior would undoubtedly contribute to my arousal. As for John Edwards and Jeremy Piven, should you be acquainted with either, hook me up. I realize Jeremy Piven looks a little bit weird now with the chest waxing and possible pectoral surgery, and John Edwards also isn’t as hot as he used to be, and the dead wife, bastard daughter and wacked new age mistress are kind-of boner killers, but I’m pretty sure I’d still tap them both. Message me if you like what you see.

Profile: Numerous members of this site declare they will not help you cheat. I’ve no such scruples. Even if you’re married, that’s fine by me. Especially if you’ve fathered a child. You might consider hiring me as your babysitter. While I check on your infant asleep in its crib, you can creep up behind me and wrap your arms around to fondle. Feel free to lick my ear. Then you can lower me to the floor, undress and take me right there while your wife is downstairs watching television. Or perhaps it would be more rewarding, and less ethically suspect, if your wife is no longer living. As you came inside me, you could tell me how I’m the first person to make you feel alive again since her death. Do you feel dead on the inside? This is a need I’d be more than happy to accommodate. Message me if you like what you see.

Profile: Here’s something I’ve always been afraid to tell anybody. I’m aroused by the men in softcore heterosexual pornographic images, whose appear gentle in their dominance, and focused on their partners’ pleasure. While I don’t mind, and in fact often enjoy, when shit gets a little crazy, I require some buildup in order to get there. I worry I’m like the stereotypical straight chick: influenced as much by psychology as bodies, requiring foreplay, a storyline. I’m afraid this makes me vanilla. Because I like to talk a big game about my radical sexual politics, to be boring shames me. For this reason, I like to confess I first began masturbating my humping a teddy bear rather than using my hand. See? I can do fetishes. Message me if you like what you see.

Headline: FUNNY A PLUS

Profile: My favorite profiles are the ones that employ humor. For instance, the man who asks, “How masculine can you be with my dick in your mouth?” I like this joke not only because it’s funny, but also because its humor is derived from its satirizing the many men on this site who are misogynist douchebags. That you spend 90% of your free time pumping iron does not give you license to despise vaginas. Or boys whose mannerisms remind you vaginas exist. I have on occasion been known to call my anus my man-pussy, and to ask plaintively, “Will you please fuck my man-pussy?” Perhaps if you are not a misogynist douchebag, I will unlock my private photographs for your consideration, one of which contains the man-pussy in question. Message me if you like what you see.

Tim Jones-Yelvington has been called the Lady Gaga of the Chicago lit scene. His work has appeared or is forthcoming in Another Chicago Magazine, Sleepingfish, Annalemma and many others. His short fiction chapbook, "Evan's House and the Other Boys Who Live There" is forthcoming this Spring in They Could No Longer Contain Themselves, a multi-author volume from Rose Metal Press. He has guest edited for Pank and Smokelong Quarterly and serves as the President of the Board of Directors of Artifice Magazine.