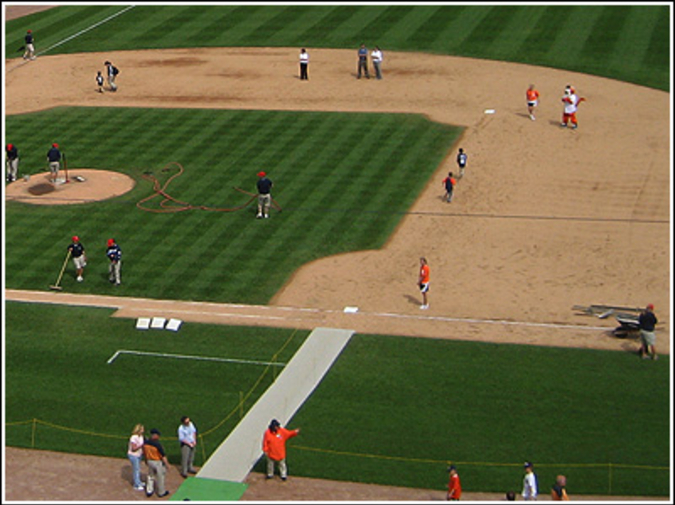 As soon as Joey Steinbach's foot sprung from second base and he made the turn, there was no unplugging it. He'd decided back on first base that if the ball even skimmed the outfield grass he was scoring. Truthfully, Joey had decided the night before that if he got into the game again as a pinch runner, he'd find someway to reach home plate. He'd give Coach Rudy a show.

Being a minor league baseball player was like being a backup singer for some awful, vainglorious Diva. Being a pinch runner in the minors? Worse. You're the understudy to the goddamn backup singer. Joey hadn't swallowed countless diet pills, hadn't conquered the bleacher steps in the summer heat, hadn't plunged a needle deep into his plump rubbery ass or taken thousands of swings in endless revolting batting cages only to end up here.

Here was halfway between second and third, grunting and puffing, grinding for home like a bull.

"Your speed is an aphrodisiac," Coach Rudy would say. "You're our Clydesdale. The team needs you."

You need a scorekeeper too. Asshole.

If Joey wasn't careful, this kind of scenario could add fuel to Rudy's asinine philosophy about some players only being good for their legs. He'd leave no room for that. With the Double A championship riding, cleanup man Marco Leeber smacked a scorcher past third base. Marco "Slow as an Ox" Leeber. Rudy inserted Steinbach. Joey hadn't said a word, just grabbed the first shitty helmet he saw and jogged out proud as a peacock. He stopped halfway, stretched his socks up high and rolled his pants up just below the knee. He pushed his wristbands up around his elbows, right to the creases, and spun the labels facing out. He spat, lunged two rehearsed seconds to the right then back to the left. He continued until he felt certain everyone was watching. It was the way he liked seeing ball players act when he was in the stands. Not a bad way to be remembered. The bench cheered, Rudy clapped. They hadn't a fucking clue.

Joey never complained. If anything, he was even more renowned for his positive, charitable attitude than for his running. Fuck. Who wanted to be known as the best bullshit taker on the team? "That Joey, he withstands some abuse!" What's the nickname? The Bashful Base Stealer? His younger, cockier teammates, so involved in their shower rituals and scented aftershaves, hardly knew he existed.

This was not what Joey planned. In high school, when nobody was home, he'd practice tipping his cap to the crowd. He'd stand naked in front of the mirror, blow a cheek full of air, hoist a shiny hat and wave it at the imaginary bleachers, maybe mime a few kisses, milk it until the joyous hollering died down. His hair was sandy blond and his muscles popped when he flexed. His head rumbled with applause. He'd seen big leaguers do it plenty. TV cameras got so close you could see the sweat on their mustaches. You could see all that false modesty oozing out all over the dugout steps. It almost made him weep. Then the dummies would go back inside and start being assholes again. Big lugs. The best players were assholes and a curtain call was asshole heaven. When he was drafted by the Astros, failure didn't exist. Failure was a word used by a part of society driving rusty Buicks, people who didn't own steely pecks and chiseled quads.

The ball came off Hakey's bat like an axe chopping wood. Joey knew by the sound that it was sufficient and could tell by the angle it had a pair of eyes. As he dug in, approaching third, Joey's senses went numb. He didn't see the third base coach throwing up both hands to halt him, didn't hear the crowd pleading, never saw his teammates covering their eyes, already assuming fetal positions.

His legs had never pumped so hard. He was growling, slobbering down his shirt. He flung his arms wide. The helmet tore off. He lowered his head, led with his tanned nose, and launched forward with everything he had. The catcher was waiting for him by the plate, bracing for the collision. Before he could manage to punch the glove forward, the explosion came. Joey's face hit the catcher's mask with such violence the umpire turned away, unable to follow the horrific sound to its conclusion. Fans clutched their hearts. It was the most gruesome spectacle anyone had ever witnessed. Joey's head came squirting off. It uncorked and shot straight up, sailed above home plate. The body crumbled, first to the knees, then to the stomach like something stiff and weighted.

The catcher saw the head and almost lunged to catch it out of instinct. It landed between his legs with a hollow knock. Joey's body fell inches before the plate, the shoulders propped suggestively on the catcher's upturned cleats. How absurd that the head landed — in relation to the neck — as if it were still attached.

The field was mobbed. Journalists grappled, rifling photos faster than the shutters could move. And then the journalists were mobbed. Fans kneed them in the head, tossed them aside, snapping rapid photos with their cell phones. "This is happening!" one girl shouted. Another spray painted "I was here" on the dugout roof and took his own picture standing next to it.

One large man with grimy jeans, Carhartts and a video camera bullied his way up close. He leaned over the body and hit the zoom switch, drunkenly swaying his hips. "What a warrior," he said. "This man was a warrior." He let loose a few snorts and pounded his chest. When the paramedics arrived and the policemen came to shove him from the field, the large man grabbed hold of a fence and tried ripping it from the ground. He didn't stop until his fingers bled. Only when he saw the watery red liquid on his knuckles did he feel like it was official; he was part of it.

Later, the groundskeeper felt honored to clean up after such an extravaganza. It was the most incredible thing he'd ever done. Home plate was still there, which he thought odd. Why hadn't the authorities taken it? He noticed a stain from Joey's entrails, a few crimson strands, splashed across its dusty surface. He wanted to carry it home to show his wife. She'd turn sexual over it. But he knew it was evidence. Stupid people were always showing up on the nightly news with some kind of evidence they thought nobody would miss.

As for the outcome of the game, nothing but the severed head remained. Nobody remembered where the ball ended up. Nobody cared about continuing it later or scheduling a rematch. A series of asterisks were placed in the logbook next to a scribbled out score.

Joey got what he hoped for. Everyone's memory of Joey Steinbach took on different, darker colors. No longer was he the obedient, gentle galloper who always kept quiet. From now on his name wouldn't be mentioned without including words like "beast" or "warrior." Everybody loves warriors. Nobody remembered him before the incident. Was he new to the team? Did he play long? Questions about his mental stability surfaced and Joey knew they would. They'd say, "In those days, so much more came to light following blood loss." If there isn't blood, Joey knew, nothing gets done. Nobody notices; nothing changes. "Joey knew things no one else knew," they'd say. They weren't sure exactly which things but they loved saying: "Joey was totally mental."

There was a bar a few blocks from the field where it happened. Locals called it "The Cave." Soon after the incident they started selling T-shirts with Joey barreling for home, shoulder lowered, arms spread, ready to collide with the catcher (nobody knew his name) and the inscription above said: "Joey the Warrior Steinbach." Now and then a tourist would stop by and ask if anyone there had witnessed the magnificent production in person. Before long, the patron would ask if it was real. Did it really happen? That was the best. The bartender loved showing the photos he had bought from a friend of one of the fans who was present that night. They were getting old and oily, but the limp body was still there, lying supine in the dirt, acting as if it were still one whole thing and not some Hollywood job. "I think I see it," the tourist would say. "It's hard to say... I've heard so much about it."

Joey Steinbach replaced a stifled belch in the world with a legend. And it was easy. Blood this way, attention that. Fill the void with your body, the quote on your gravestone. If you'd known young Joey, his dad, uncles, his posters on the wall, you'd have seen how unbelievably, gorgeously inevitable it all was.

Simon A. Smith lives in the Lincoln Square neighborhood of Chicago with a murderous orange tabby named Cheever, and his fiancee, Romi. They will be married in early July. He is currently pursuing his MAT in Language Arts Education and should be finished by the end of 2010. His stories have appeared in Quick Fiction, Opium, Dogzplot, Storyglossia, Skive and other stuff. He likes it here.