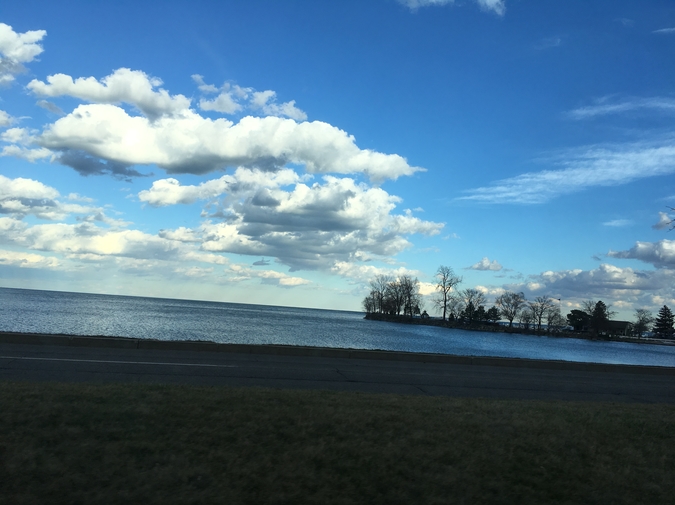 Six feet trying to find their footing on the floor in the back of Mark’s father’s Buick Regal. His friends—Justin, Ish and Andy, high school freshman football players, the same as Mark, thick-necked and drunk as him, bodies trained for violence, game as him for any adventure. Except he sits in the front beside his father at the wheel, left hand centered on top of the wheel, right holding a fresh gin gimlet, one-part Rose’s lime cordial, three parts Gordon’s gin, “road sauce” his old man calls it. There isn’t much space on the floor in the back because of the contraband at his friends’ feet: one crowbar, more rust than iron; two aluminum baseball bats from his time in little league; and one weighty gardening tool that looks like a three-foot long flathead screwdriver with a rubber handle. He has no idea of its name or original purpose but his father thought it’d make a good weapon, he said, swinging it in their garage before they left, “like something out of Braveheart.”

“We’re early,” his father says, checking the digital clock on the dash. He tries to put his gimlet in the cup holder beside him but the base of the low-ball glass is too wide.

“Want me to hold it?” Mark asks his father, the diligent son.

“No, it won’t tip. Trust me.” His father pushes in the car lighter and pulls a cigarette from the pack of Merit’s on the dash. “What do you say? You boys want to stop for some Wendy’s? Burgers on me.”

The three in the back cheer. Say “fuck yeah.” Say “we could destroy some burgers.”

“That’s what I thought. Kim’s not done with her shift until ten anyway. Got plenty of time to put some food in our bellies.”

Mark thinks of his sister working the closing shift at American Eagle, folding preppy sweaters at the end of the day, glancing at the clock and out the window towards the Chick Filet in the food court and the girl who works there who, with her boyfriend, has followed Kim home the last three nights, has threatened to kick Kim’s teeth in. Mark doesn’t know the reason behind the threat or what Kim may have done to instigate it, but thinks he understands why Kim didn’t say anything until this morning. He looks at his father, the gimlet, his friends and the weapons at their feet and figures he understands her just fine.

They wait at the pay window, the Buick in park, engine gargling. His father crunches the ice from the finished gimlet and tells them about his violent youth. “You boys don’t know violence. You grew up safe in the burbs. Yes, you’ve been in a few scraps. You’re no pussies, that’s for sure. But the Bronx in the fifties? That was something else. Did I ever tell you about the guy with the pony tail who we threw through the window of the diner in Queens? Fucking glass everywhere. Did I tell you that one?”

Mark has heard it before. Heard all of his father’s brutal lore. But his friends haven’t or, if they have, are happy to hear about it again. They ask him about the glass in Queens. He tells them, pays for the burgers and, as they drive to the mall, as if to encourage them, a general addressing his troops, he tells them about fights with broken bottles, about fighting the black kids because he was white, the Italian and Polish kids because he was Jewish, the rich kids because he was poor. Fighting and fighting and fighting until they pull into Riverside Square Mall, one of the only cars entering the lot as the rest exit in a slow stream, the traffic mellow on a Thursday night. Mark knows the stories aren’t over. They never end. But they’re here now. Time to make their own story.

“Kim said he drove a green Toyota Camry with tinted windows and a spoiler. You can’t trust tinted windows. Means you’ve got something to hide,” his father says, lighting a cigarette and turning the car off. They are facing the main entrance. “Keep your eyes peeled, boys. Green Toyota Camry driven by two idiots who don’t know who they’re fucking with. And don’t forget to choose your tool. We want to look intimidating. A car full of trouble.”

Ish calls the weird gardening tool. Andy and Justin, like good athletes, each take a bat.

“What if they aren’t intimidated?” Mark asks.

“What?” His father says, struggling to see through the years of smoke coating the inside of the windshield but refusing to open the window to the cold January North New Jersey night.

“The girl from the Chick Filet and her boyfriend. What if they aren’t intimidated?”

“Then I guess we’ll have to do something intimidating to them.”

The boys cheer in the back, open another round of Rolling Rocks from the case his father got them. Smells of beer, grease, smoke and body odor.

“Did I ever tell you about my uncle Larry? The corner man for Sugar Ray?”

“Because he was so sweet.”

His dad laughs. “I told you that one, huh? Well, it’s true. Sweetest guy I ever met. Generous too. Used to break legs for the Teamsters when he couldn’t get work in the ring.”

The boys in the back laugh. Andy holds the bat between his legs like a metal erection. More laughter.

A car drives by, slowly, a dark sedan but Mark can’t discern the make or model.

“I can’t tell. You can barely see through the windshield,” Mark says, but makes no move to clean it. The car pulls past the entrance towards the parking lot in front of the movie theater.

“Did I ever tell you about the postal trucks we used to steal? Those were good times. What a place to grow up. I pity you kids for not experiencing it.”

Kim exits the mall. His father sees her, turns the key in the ignition just far enough to flash the high beams at her. She looks small though she’s less than fifty feet away. Tiny, Mark thinks. Less like his older sister and more just like a person, a little person in a big world. He opens his car door to go to her, leaving the crowbar wedged between his seat and the center console. The sedan is back, though, slowly rolling towards his sister.

Mark has one foot on the pavement and one in the car. He sees the car. It’s a Toyota. A green one. “It’s a Toyota,” he says, his stomach dropping.

Mark sees and doesn’t want to say but he can’t resist his father, the weight of his past. “A Camry.”

His father opens his door and flicks his half-smoked Merit into the dark. “All right boys, it’s showtime.”

Kent Kosack is a writer and MFA candidate at the University of Pittsburgh where he teaches composition and creative writing. He is working on a novel and a collection of short stories. His work has been published, or is forthcoming, in Sonora Review, Tin House (Flash Fidelity), the Cincinnati Review (miCRo series), Columbia Journal, 45th Parallel and elsewhere. See more at his website: www.kentkosack.com.