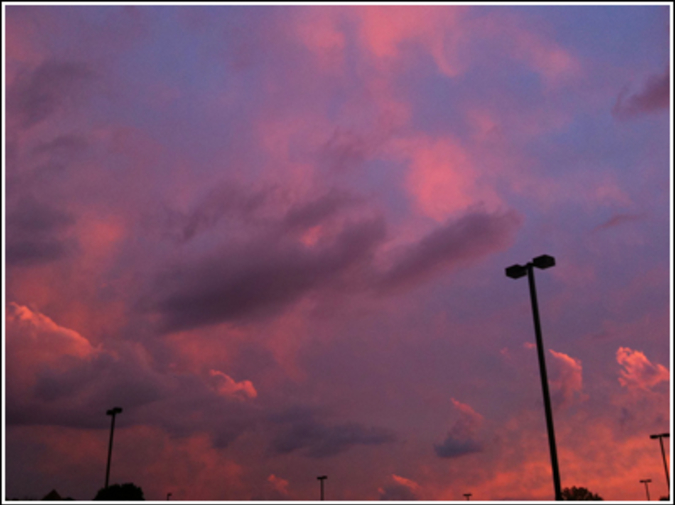 John slapped a five dollar bill on my thigh. Wait for her to come and get it, he said, no no, don’t move it. The girl crawled slowly toward me, jiggling her breasts and bearing her teeth. She was trying to look like a jungle cat. She took the bill from my thigh and told me to open my mouth. I did. I let her slip the bill between my teeth. She squeezed my breasts with both hands, put her mouth to my ear and whispered something that was drowned out by the music. She then moved her lips to mine, and slowly took the bill from my teeth.

That was hot, John said. I’m getting you a lap dance.

He called her over after the song. She led me by the hand to the back wall where there was a row of dark leather booths. He followed us.

Let’s wait for the next song to start, she said. We sat down next to each other, the two of us only taking up one seat. We watched the stage, where some blonde with fake breasts humped the floor. The men’s eyes were led by invisible strings tied to every movement of her body. John stood to the side, looking back and forth between her and us.

I felt the heat radiating from her body. She must have been healthy. Her arm was touching mine, moist with sweat. She smelled the way I imagined whores did, sugary.

Oh. Where you from? She looked down at her legs. They were nicely shaved, shimmering with glitter lotion.

Oh. I’m from Yukon Oklahoma, you’ve probably never heard of it. Is he your boyfriend?

He’s cute. I’m going home for Christmas this year for sure. It snows there during the winter, I love snow. And my family misses me, I think. She said, all the while looking at the stage indifferently. And I’m going home to have some real food. All I eat is junk now.

In my peripheral vision I could see John shifting with impatience. I knew he was wondering whether he had paid twenty dollars just to watch us have a conversation.

She said: I sure miss my family. My dad always wanted me to learn Spanish due to his parents being Spaniards, but I never did. When I go home for Christmas maybe I’ll take a quick class or something. Perhaps she noticed John’s restlessness too, but just didn’t care.

The song ended and another song began.

Didn’t know how tired I was from dancing until I sat down, she said. You don’t mind us waiting through another song? I just need to catch my breath. We can watch the stage for a while. The dancers tonight are pretty good.

Should have listened to my dad more, growing up. But I felt for my mom too much to be listening to him. I figured if she hated him so much, I’d be letting her down if I took his advice. Even if he meant well, you know?

I was about to say something, but she kept going.

Now I’m thinking that I love them both the same. When I go home for Christmas, I’m going to spend half the day at each of their houses. That’s what I always did, anyway. I haven’t been home in about three years now since I told them I was going to school.

Where are you going to school? I asked.

She pushed herself up and lifted a corner of her panties, revealing a small red heart on the side of her hip with “MOM” on it, in cursive.

Yeah. I need to get dad on another heart next to it. I was going to do it but it just hurt so much, had to stop. It was my first time getting a tattoo, believe it or not. Do you have any tattoos?

John stepped over in front of us. We have places to go and things to do, you know, he said, looking at me but speaking to her.

Oh! She said. I was just trying to catch my breath. Really wore myself out on the pole tonight. She giggled. I’ll start right now.

She climbed onto my lap, and then put one knee on each side of the arm rest, trapping me in the middle. She tilted her crouch toward my face and rocked it back and forth. She lowered herself and pushed her breasts to me. They were cold and hard. Do you like boobies? She giggled. She leaned to one side and breathed heavily upon my neck. She blew in my ear and caressed me with both of her hands. You are so soft, she said. She humped me politely, without touching.

Through her tangled hair I saw John standing behind her with his eyes fixed deadly upon us. He saw me looking at him and smiled. He raised one hand and made a slapping gesture, then pointed to her ass. To elaborate, he mouthed the words, Slap her ass.

I closed my eyes, and leaned back into the chair.

Kitty Liang is a graduate student at UC Davis. She is married to a soldier. She has a pet rat named Maybelle. In her spare time she likes to listen to country music and imagine riding horses.