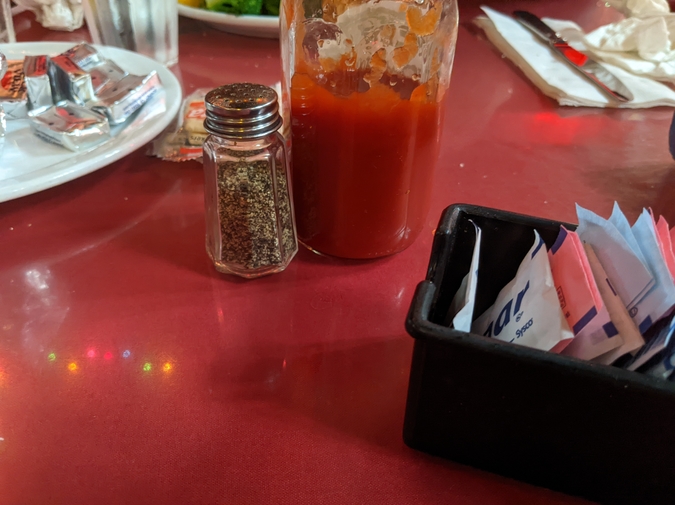 Lucy’s entire future was annotated on a sheet of copy paper she kept in her wallet. Sweet Christ, she showed it to me. How at age twenty-six she would become an LPN and earn forty-thousand dollars a year. Father down was “New York at 32” with arrows to the words “loft apartment” and “single?” which had been crossed out once then rewritten. I was more interested in the pattern of vines she had drawn along the border in black ink and how the paper had gone soft at the folds.

That was the summer Lucy and I worked at Ferrero’s. Lucy was only stopping through, filling the coffers for grad school, but I was full in it—making a living, as they say. Only why did it feel so much like digging graves? Sometimes in my dreams I heard the patronage chewing steaks, so loudly, so close, like it was the cartilage of my own ear. That was the summer I sweated through shirts and woke in a bed sometimes with bottles in it and once, next to Lucy. She spent the night reading to me from Play It As It Lays and saying I had to get out of here, aghast at how I had no plan.

When I woke the next day at noon, she was gone but had done the dishes for no reason. The front door was open and rain was coming in, the carpet matted down with water under my bare feet where I stood drowning in the slowest manner possible.

That was the summer I fell in love with Lucy about once a week for an hour, though I was a Capricorn and someone told me this was normal. Lucy doing pull ups in the coat room. Lucy rearranging reality with her smile, putting her hand on the shoulder of a man aflame about an overdone ribeye until he was again a school boy. Sorry, ma’am. It’ll never happen again, ma’am. Lucy turning with a tray in the kitchen and Johnny Ferrero’s lip crinkling until you saw the pink stuck teeth.

That summer was like a movie or waiting for a movie to start, stuffing yourself all through the previews and when the movie came it was always a rag—the lights dimming in Ferrero’s, and Lucy and I watching the tourists from Jersey and the city file in with their reptilian hand bags and their cigar cutters and their four alarm hairdos and their butchers’ faces and their children who already made more money than we did.

Every night a drama, even if you knew how it would go. There was coke in the kitchen, which we stayed away from, and a couch in Johnny Ferrero’s office which was not where he sat to do accounting. You got used to it I guess, as much as one got used to setting off fireworks in a closet—it was exciting and over before it started, and sometimes we sat out on the curb afterward, counting our tips and our fingers.

That was the summer we went up to the lake in Lucy’s purple Jetta with the bad radiator. The lake was named after a more magnificent body of water in Switzerland which, according to her folded future, she would one day visit. If I didn’t believe her, I could see for myself. Tthe windows were down and the wind rippled the paper in my hands, threatening to steal the rest of her life away. See, she said. See? But I was only looking for my own name improbably written there, an amendment to all those achievements to come. I found nothing new, and barely the space to write it. An inch or so of space remained on the bottom of the page. She hadn’t decided yet how she would die.

Yes, I said. Amazing. And we sat on the little beach drinking beers we had appropriated from Ferrero’s, the day twinkling like a garland. Lucy dared us to swim across. The whole way? I said. Three quarters of a mile, she thought, though she’d been a lifeguard and this was perhaps nothing, this lake nothing, no Switzerland, only the thumbnail scratch of a glacier as it paused to scoop out the mountains.

Before I could co-sign on her plan Lucy stood and left me for the water. How she would one day leave for school and I would stay and how this would be a choice even if it didn’t feel like one. I wanted to be the sand stuck to her back, though it was not a beach that should have had sand. There weren’t enough shelled creatures here that could have died to make it. The sand was trucked in.

With one patient stroke after the next she swam, the surface shimmering all around her like a shattered crystal ball. And though I felt the pull to follow I found myself thinking instead of Ferrero’s where couples would already be cupping their hands against the dining room window.

The house lights would be down, every table set by Lucy or me the night before, and the silver polished—on the left the one for holding you down and on the right the one for finishing you off and beneath, the folded bib to wipe it all away.

Greg Tebbano is employed as a grocery worker and, occasionally, as an artist. His fiction has appeared in Meridian, Post Road, Hobart, Contrary, Pigeon Pages, Maudlin House, Pithead Chapel and is forthcoming in Zone 3.