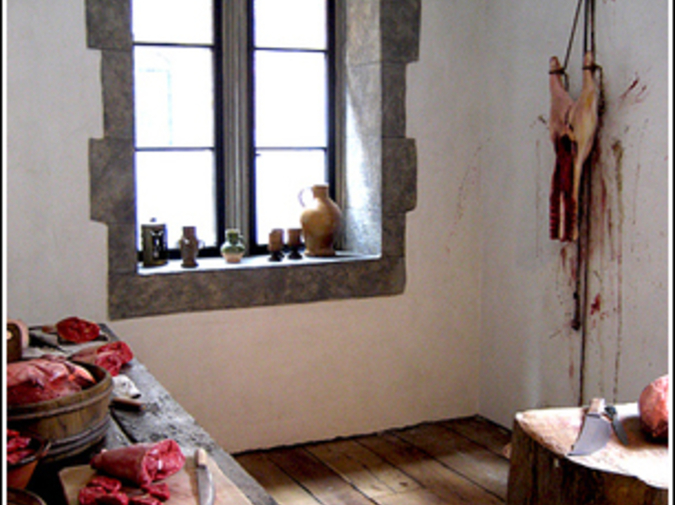 I wanna have cool recurring dreams, ones that'll make me sound smart when I describe them to people. Right now, I only have the same dreams everyone else has -- you know, where your teeth fall out, and you wake up all relieved when your tongue meets resistance at what had been a bloody socket in your sleep. I thought that I was on to something when I started dreaming about putting my contact lenses in, but it turns out that they're not that uncommon, either. Before I switched to glasses full-time, I used to have nightmares in which I needed to put in my lenses in a really filthy place, and they were all big and opaque and dirty, so that it felt like I was trying to shove a dead jellyfish in my eye. But one of the girls at work -- a waitress, college kid -- told me she had the same thing. She even started using the jellyfish line, which made everyone grab their eyes when she repeated it.

So, after overhearing another conversation about some English class among the wait staff, I decided that my recurring dream was going to involve ear amputations. It's compelling, but not perverted. I don't think it can be easily linked to any bad things from my past -- I mean, you can't immediately say, "Oh, you must have been abused," or something. And, just to show that I'm not just some dumb line cook who can't follow all their conversations, I can point out that ear-cutting is an act that has a lot of references in history and books. After deciding on this course of action, I came up with a list of famous ears that were lopped off:


1. The guy who tried to arrest Jesus, only to have one of the disciples pull a sword and slice his off his ear. (Where'd he get the sword, by the way?) So Jesus picks it up and reattaches it. Just sticks it right back on.

2. The cop in Reservoir Dogs, who loses an ear while being tortured, and then the torturer picks up the ear and talks into it -- "Hey, can ya hear me?" Everybody loves that, although I think that the makeup they used was really fake. You could clearly tell that there was a lump (his real ear!) underneath that fake hole in his head.

3. Vincent (Victor?) Van Gogh. He cut his own ear off. With one of those old-time straight razors, I think.

4. There's this movie that all of the wait staff saw that I didn't -- and they acted all surprised when I said I hadn't -- called Blue Velvet. That has some guy finding an ear in a field, they said.

Now I have to decide if it's going to be my own ear that gets it, or if I'm the one who's doing the chopping. It's a tough call. I don't want people to get too freaked out by me saying that I think about mutilating people, but I also kind of like that dark side. Besides, I don't want anyone's pity when they hear that I feel victimized in my sleep. Yeah, that settles it -- I'll dream about being the cutter, not the cuttee. But it'll be as if I'm watching myself doing it, and then I'll feel guilty and hold the bloody lump of flesh and cartilage in my palm and wonder how this could have happened. That'll add some sweetness to it. Maybe I'll have to throw in some other weird detail. Like maybe I'm always dressed in my uniform from Catholic school -- navy blazer, plaid tie. And then, during our smoke breaks by the dumpster, the college kids will have their faces all lit up red by their cherries, and they'll be like, "Holy shit, that's fucked up." And it'll go from there -- they'll debate what it all means, what the cutting means, whether the blood is a good sign or a bad sign. Whether it matters if I use a razor or a meat cleaver or a Ginzu. They'll each make mental Polaroids of me. In some of them, I'll be sadistic and scary, crunching the severed ear in my hand and laughing. In others, I'll be sad and quiet, and I'll let the knife drop the floor and then beg forgiveness of the person that I've hurt. In our little circle of glowing cigarettes, they'll be talking about me.

Robert Repino grew up in Drexel Hill, Pennsylvania. After serving in the Peace Corps, he earned an M.F.A. in Creative Writing at Emerson College. His fiction and poetry have appeared in Word Riot, The Furnace Review, 'a-pos-tro-phe, Ghoti, JMWW, and the anthology Brevity and Echo (Rose Metal Press).