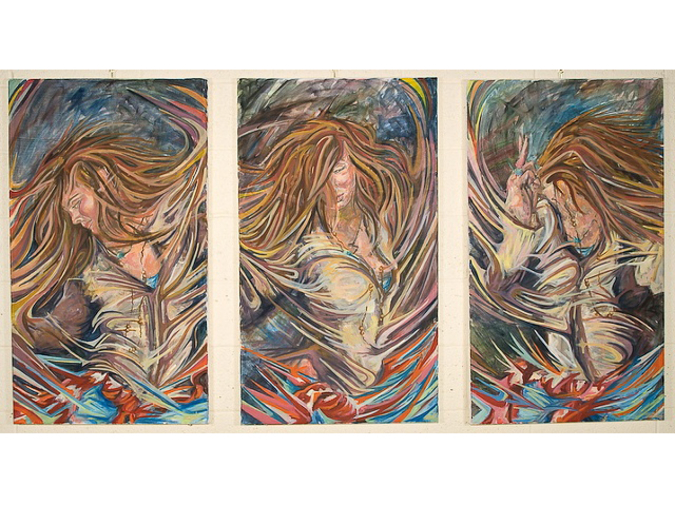 “What is there to explain?” She rubbed her bare arms. She hadn’t known it would be so damn cold in the underworld. “I loved my husband. I want him back.”

“Because he was my world,” she said. It was a lie. But how else could she explain it? He was half my world, except when he wasn’t. Except when I forgot him in the bliss of my body.

Hades rolled his eyes. “Fine.” He shooed her. “I’ll give you what you ask for.”

After Evie’s husband died but before she ventured to the underworld, she took a job as a lifeguard at Poseidon’s, the city water park. She had loved her husband for all the right reasons. The language of his inner life fascinated her—he painted surreal portraits of ancient monsters—and he made loving her seem easy when she knew it was not. She loved her husband, too, for what her romantic sister would call the wrong reasons; after college he had taken a job designing creatures for a gaming company. His salary allowed her to quit her minimum-wage job at the local hardware store. His support allowed her to audition for the local dance troupe and travel to weekend competitions across the south.

Oscar fell for the sad woman who worked with him at Poseidon’s not only because she reminded him of all the mistakes he had ever made—if he could fix her, he could fix everything—but because she had a car and a house and she could buy beer.

That was how it started: he approached her after work. She was unlocking her car. He hadn’t meant to startle her.

“Don’t apologize.” She thumbed at the pepper spray on her keychain. “But also don’t walk up on women in dark parking lots.”

His friends had put him up to it; they wanted a twelve-pack for a party in the abandoned shed behind the community center. But now he saw her slumped shoulders, smelled her scent of chlorine mixed with the floral perfume she’d hastily sprayed, felt her restlessness radiating out so strong it nearly rippled the air.

He asked if she wanted to grab a drink. She laughed. “How old are you?” But she didn’t say no.

She bought him his twelve-pack. They drank two bottles behind the gas station. This became their daily ritual, as sacred to him as any religion.

She took him home once and only once.  While she slept naked and still as death, he crept through her darkened hallway and into a closed room; it was full of monsters: half-completed, half-alive, perched on easels from wall to wall. He didn’t tell her what he found.

The boy was nothing like her husband. That’s what she liked about him. Those rushed moments behind the gas station. It was a relief that she could still breathe into another body, that she still remembered the steps to that waltz. But afterward he told her that he loved her.

“He was an artist,” she said. The simplest way she could get him to shut up.

She danced in his empty room.

Hades was like any other god; he didn’t understand most human desire. But ambition he understood.

Not long after Evie came to him, he met a young man who also reeked of chlorine.

Hades held up one blue hand. The dead lived cold beneath the world. “No need to explain.” He smirked. “I will give you what you ask for.”

Bonnie Jo Stufflebeam's fiction and poetry has appeared in over 40 magazines such as Masters Review, Clarkesworld, Lightspeed, and Everyman's Library's Monster Verse. She has been a finalist for the Nebula Award and Selected Shorts' Stella Kupferberg Memorial Prize. Her audio fiction-jazz collaborative album Strange Monsters was released from Easy Brew Studio in April 2016. You can find her online at www.bonniejostufflebeam.com or on Twitter @BonnieJoStuffle.

Jackson Zorn is a native South Carolinian who currently resides in Lake Jackson, Texas and teaches drawing and painting at Brazosport College. His artwork focuses on overused pop-culture icons that have become  melancholy social performances for the masses. He draws pictures, watches professional wrestling, and walks his dog daily. More of Jackson's artwork can be found at www.zorned.com or on instagram @jedijackyeti.