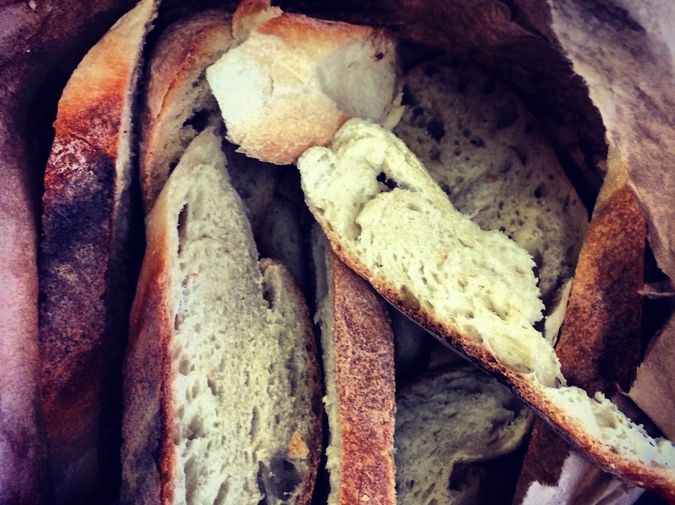 I start working in the bakery because I think of it as romantic. I count each sugared donut while composing hypothetical letters to past lovers – half-invented, half-remembered.

Last night was nice – not remarkable, but pleasant in its stillness and companionship. I’m writing to you to tell you that it’s over, now. I’ve noticed our dates are getting shorter and conversations more serious.  We only ever meet once a month. Those jeans you own are too tight and I’m not waiting while you lazily peel them off. I don’t like the shape of your left eyebrow; it’s menacing.

The donut is misshapen. There’s no hole in the centre – instead a fine, congealed layer comparable to an unpleasant web of skin between fingers. I throw it in the reject pile to be counted later. Every member of staff here is on autopilot, disengaged. The dead, undone, and making pastries. At the end of the day, no one is permitted take home unsold stock. If you’re caught with confectionary after you’ve clocked off – even the remnants of an imperfect batch that never made it to the resplendent limelight of the shop floor – you’ll be fired. I’ve swiftly learnt that acts of rebellion are few and far between in the supermarket, a place of prodigious apathy.  Those are the rules. Everyone obeys them (even those with criminal appetites).

It’s very simple to push people away. It’s the logical, rational decision. I’m sure you don’t understand what it means to be truly alone. I only sleep for a few hours during the day (and dream in creative ways about the destruction of everything I love). I watch friends leave one by one. I’ve realised that the nature of all things is fleeting. Nothing is ours for keeps. It seems reasonable to end things with you – not that they ever started – because, because.

Baking is a loose term for what we do. I wake up at five in the morning. I go to the freezer, bring out the goods and put them all in the oven on a pre-set programme.  When this is done, I clean the displays. Mostly I work alone but sometimes I’m joined by a man called Gary who is small and gaunt – with an aversion to desserts. I wonder if his means of employment is a cry for help, a way to express his self-loathing. But I’m too polite to ask. After we exchange morning pleasantries – an awkward conversation about how irritating it is to wake up so early – he will hold a baguette against his crotch, gyrate his hips and mimic sexual ecstasy. This is a ritual I’ve grown to accept. It’s possible to predict how the rest of our shift will pan out by the theatrical contortions of his face. A soft, resigned orgasm means he’s in throws of a cumbersome depression; on these days we bake in silence. But if he comes with powerful comedic force we talk about all manner of things – usually his failed marriage and repugnance to tiramisu.

A voice over the tannoy announces a spillage in fresh foods.

Every time someone expresses romantic interest in me I am reminded of the distance that exists between us physically. I’m not thinking about what it’s like when you’re about to go down on me, tongue fingering inner thigh. You’d always ask me – breathy and intense –  “what do you want?” and then we couldn’t move. That moment of silence was harsh. Neither of us knew what we wanted. I liked fucking you, though. Do you know that in French there’s no verb “to have sex”. You can make love. Or you can fuck. There’s no in-between. I’m completely consumed. You’re eating all of me up.

I appreciate that the monotony I once found soothing is, quietly, driving me mad. Bake. Clean. Repeat. Bake. Clean. Repeat. I have too much time to ruminate. I’ve begun to understand that this isn’t the trail of breadcrumbs that will lead me to a glorious career; it isn’t giving me space to “realise” my future. I’m in a muggy rut, besieged by pan-au-chocolat and collegeaues who have a fiercer grip on reality.

Gary is leaving. We hold a party over lunch and eat cake. It’s distressing watching him ingest slice after slice, wincing. As I spend the next thirty minutes attempting to establish whether he is gagging or laughing, I wonder what’s so noble about enduring the things that we hate for the sake of other people’s perceived sensibilities. Chocolate is smeared between his teeth; when he smiles it’s as though he has a mouthful of shit and that’s all I can focus on when he somberly nods goodbye in my direction.

I know I won’t see Gary again and I’m probably supposed to be a little sad – we are friends.

Do you remember when we stayed up drinking in your room, kissing with cheeks full of Bombay Sapphire because we’d ran out of the bad wine?  It was all over your face, perfumed tears that I licked until I was too drunk to speak. I try not to reminisce; that sensory memory is in a recess of my mind that I have no control over – your sweat was sweet. When I’m lonely I can still taste your skin from that night.

I pick up an unsightly donut, letting its deformed mass swelter in the grip of my hot hand. I look at the heap of spoilt produce, all together. Sugar like diamonds. Puffy creases of dough like prized sculpture. Even in this miserable stack, their defective appeal is incandescent compared to their neatly packaged bedfellows.

In the afternoon I walk away with a pocket of leftovers feeling triumphant.

Lauren Vevers is a writer based in the North East of England. Read more of her work at http://www.thebellinijar.com. Follow her on Twitter @LaurenVevers.