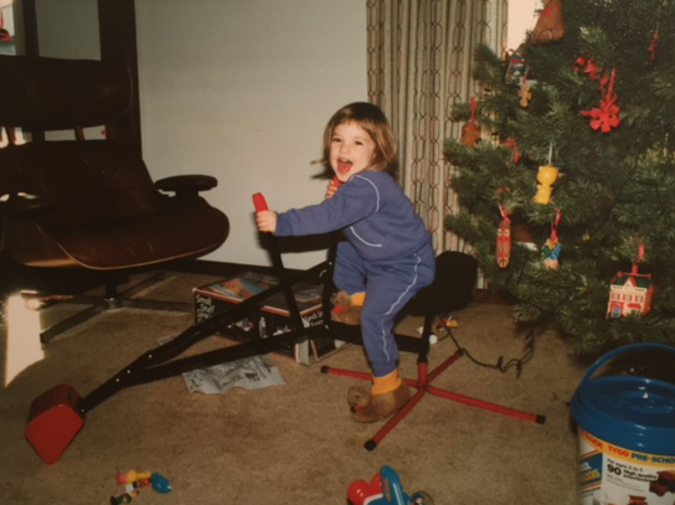 I grew up an only child in a family that felt rootless. We weren’t religious, and we moved around a lot; our extended family was states away. We only ever saw them in summer. Christmas was just my mom, my dad, and me. No Jesus. No traditions. No big meal.

The only consistency I remember: on Christmas Eve, we left out a plate of milk and cookies for Santa. When I learned how to write, I started adding questions for Santa, stuck onto my stocking with Post-it notes. When I was four, we lived in Columbus, Ohio. I was troubled because the chimney in that house was very narrow—too narrow for me to slide down, much less a fat man. I couldn’t picture Santa walking through the front door like a regular person. It also seemed unfair that he didn’t visit my Jewish friends. And then there were the logistics—the impossibility of him getting to all the children in the entire world in a single night. Yes, I understood time zones, and yes, I knew that his sleigh was magic and therefore didn’t travel at normal speeds. But landing the sleigh, coming down chimneys, putting down presents, and then eating the milk and cookies—all that time added up. Also, how did he eat that many cookies? It would make sense if he took one nibble and left the rest, but every Christmas morning, the whole thing was gone besides a few crumbs.

So a few weeks before that Christmas, I decided to do some detective work. I was interested in science and generally curious, so I figured it wouldn’t come across as suspicious. I asked my parents: What temperature is freezing? What temperature is it, then, at the North Pole? I told them to write the answers down, so I’d remember. My mom wrote down the temperature of the North Pole as 32 degrees, same as freezing. My father wrote down, in his neat, boxy engineer handwriting: 0°F. I took the pieces of paper and hid them in my room. Evidence.

On Christmas Eve, I dutifully wrote down some questions. If Santa’s favorite food was milk and cookies, what did Mrs. Claus like to eat? How many children did he deliver to? What was the most popular toy? And then finally, the real question: What temperature was it on the North Pole?

In the morning, I tried to not let on. I opened my presents, glanced at the notes, waited for my parents to go back to their regular parent stuff. That was when I took the Post-its to my room. I compared them with my parents’ handwriting samples from a few weeks earlier. Just as I suspected. Santa’s handwriting was the exact same as my dad’s, the exact same answer: 0°F. It confirmed it. Santa wasn’t real. I destroyed the evidence and pretended to believe in Santa until I was in the fourth grade.

This is a story I tell myself: I was skeptical even as a child, planned ahead and used evidence to trap my parents in a lie. But there are incongruences in my memory. I remember, age six, asking for a popular toy that pressed floral-scented dough into flower shapes. On Christmas, it wasn’t under the tree. My parents told me, like they were truly and deeply sorry, that it had fallen out of Santa’s sleigh. I remember feeling sad, picturing my toy somewhere out there on some roof, meant for me, abandoned, probably broken. So. Maybe I was older when I wrote the detective notes. But that doesn’t make sense either. I specifically remember the mantelpiece my stocking hung from—red brick, the Ohio house, age 4. I specifically remember me picturing the flower toy broken and useless on somebody’s roof—adobe, the Arizona house, age 6. The only option is that I pretended to think Santa was real so well I turned myself back into a believer. I think this is what happens with some people and Jesus.

Either way, it doesn’t explain what happened one day when I was 11. I had gotten a Nintendo 64 that year for Christmas, which my parents hooked up to the TV in their bedroom. On their bookshelf, they had a silk journal. The journal’s pages had been carved out by my father in neat squares, each holding a gold coin in a plastic case, a purchase they had made as “an investment” when the price of gold was good. Only a couple squares were filled, the investment plan abandoned. I liked to pull the book out, feel its soft silk, look at the shiny gold. But one day I noticed something in one of the empty squares toward the end of the book. A paper packet. I opened it. It contained teeth. Baby teeth. The ones that were supposedly collected by the tooth fairy. The tooth fairy, whose existence still seemed plausible to me, because she was a fairy, so she could get in anywhere, and because each night she only had to visit the houses of children who lost their teeth the day before, a number that was surely large but possible. The tooth fairy, who I was much too old to believe in, yet did.

I shut the book, took the paper-and-teeth packet to my mother. “What is this?” I asked.

She was quiet for a while. I could see on her face some sort of internal calculation. “Julie,” she said, using the form of my name she had called me when I was very little. “I hate to tell you but the tooth fairy isn’t real.”