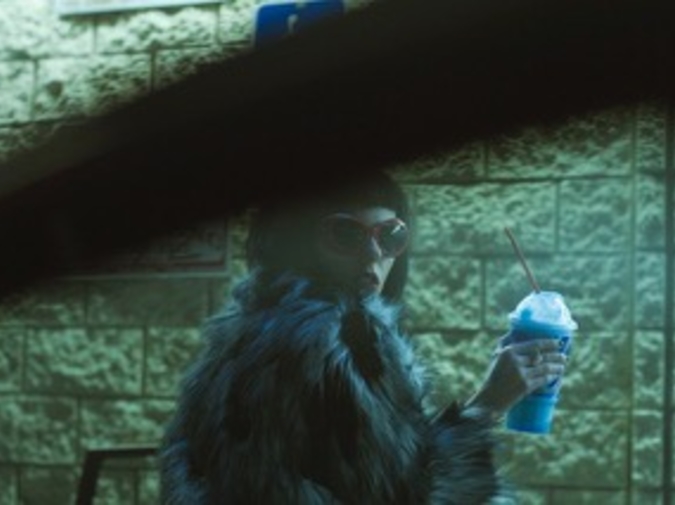 Kimberly screams into my ear with all the loudness of her voice tuned to the frequency of my cellphone. “Fuck your plans, I can’t be alone right now.” Her sentences are punctuated by the sound of her snorting lines. We’re sixteen with too much free time.  Kimberly slides her finger across the skin above her lip and licks the coke that dribbled out of her nose. She just had a big fight with her boyfriend, John, who is forty-five years old. Kimberly says she needs somebody to go with her to Hollywood to deal with this fucking bullshit. She meets me at my house. I’m wearing jeans and a Heatherette tank-top with a diamond graphic (“diamonds are a girl’s best friend”), and expensive hair extensions, the kind that take hours to put in. We make the easy one-mile trek to her house so we can get properly dressed-up.

Kimberly’s house is is disheveled. The house is filled with things, and creepily devoid of people. I’ve never met Kimberly’s parents. The things are everywhere. Dusty Chanel purses and indifferent designer cosmetics. Her phone rings, the ringtone indiscernible over the blasting MGMT record. She violently motions for me to switch off the stereo so she can put John on speaker phone.

She crushes up some blow with a MAC compact and does a line, her anger switching off instantly. She resurfaces on a genial plateau of euphoric haze. She throws some Marlboro Reds into one of her Chanel purses and soon we get picked up by John in his BMW.

My hair is flying everywhere. We are driving fast, fast, fast, the world around me shaded dark through Valentino butterfly shades. Kimberly tells me she loves me. We pull up to John’s house, hop out of the BMW and get into his Escalade.

Kimberly lights up a cig. She brags about her matches from Vegas and how fast they light up. I read all the stickers in the garage, something about empowering girls and donating to Africa.

“Do you have any kids?” I ask John. The seats are beige leather, soft, smooth. It feels like a spaceship, somewhere to hide from the dry heat of the San Fernando Valley.

We leave and stop at a liquor store. Kimberly and I are in need of some eyeliner, but I can’t find any. I ask if we are going to get drunk at the beach, Kimberly says yes, which sounds pretty nice to me.

It’s a long drive to the beach from the Valley so John stops in the parking lot to make us some drinks in the car. I drink whatever John mixes. Vodka and red gatorade, and it’s strong. The lack of food replaced with diet pills makes me dizzy. We're drinking out of red cups, and we stay in the liquor store parking lot until the cups are empty, because we don't want to spill in his car.

Kimberly and I take some Vicodin, because it’s there and it’s free. She’s more cautious than me and only swallows one once I have first.

Back on the road, we’re listening to music and dancing in the leather seats and smoking when Kimberly picks up her jacket off the floor of the car, revealing two handguns and one shotgun.

I shake my head, hypnotized by the presence of a weapon I’ve only seen in movies. Can’t stop staring at them—the shiny metal things half-covered by Kimberly’s soft yellow hoodie. One, two, three.

“Have you ever killed anyone?” I ask.

He looks at Kimberly, then at me. “Yes.”

John tells me that there are only a thousand in the world of the shotgun, and proceeds to put it in my hand. I laugh and tell him I’ve never held a gun before. He laughs and says he’s not going to kill me.

I keep nodding off and being woken up by John feeling up my thighs.

We go to this restaurant in Malibu called Taverna Tony’s. He gets a jack and coke and orders us two margaritas on the rocks. John knows Tony so we meet him. John keeps showing off his status and saying how Brad Pitt goes to this restaurant and that we are at the best table. At this point I am so drugged out, I ask anyone I see if I look cross-eyed because I am so dizzy.

Kimberly’s desire to go to Venice Beach is overpowered by her need to “ride the sea dragon” at Santa Monica pier. We have a five minute argument about its actual existence and then we’re on our way. We arrive at the 3rd Street Promenade, where John makes a reservation at Hotel California. I try to make the concierge believe John is my dad but they just look at me for a second, me wobbling around with Kimberly, and then ask John for his credit card.

We go shopping. Walking itself is a carnival ride, and Kimberly and I are both talking in amazingly convincing British accents. He gets Kimberly a $300 dress at Max Studio, and then buys me $200 worth of Juicy Couture perfume and body wash at Sephora. After a few hours of going in each store on the quaintly-lit promenade we drive Kimberly back home. But I don’t want the night to end. I want this—this glamourous daze of drugs and shopping—to go on forever. John drives me back to the hotel with him. In the car, John starts massaging my thigh at first, and then smacks my crotch, hard. At the hotel John tries to fuck me but I cover up my pussy and tell him to put on a condom. He looks momentarily sheepish, maybe even girlishly shy, like a little kid in trouble.  I ask him if he has any STDs and he gives me a look like that would be the most scandalous thing ever.

We fuck, and he constantly tells me he loves me and how gorgeous I am, etc. etc. I play along, tell him I love his cock. I let him unzip my dress and we fuck again while I stare at the beautiful Hotel California’s ceiling mirage of fish and the Attack of the Fifty Foot Woman movie poster. I give him head, and I gag, and he pushes my head and I throw up on his dick. My stomach is only vodka and pills so nothing comes up but acidic water. Not that it even matters because I lick it all back up. My body does not belong to me, is not even attached to me, I’m floating.

It ends and I tell him I am leaving to walk back to Express to get my jacket, since I left it there. I got it from Wasteland and I really fucking like it.

I do not come back. I am in Santa Monica and everything is closed and this means my only way of getting back home is calling my dad.

Nausea ripples through my body through the drive back to house. I sit in the back and listen to oldies, K.Earth 101. I’m annoyed by the taste of salt on my lips and by how long the clean scent of ocean air lingers in the car.